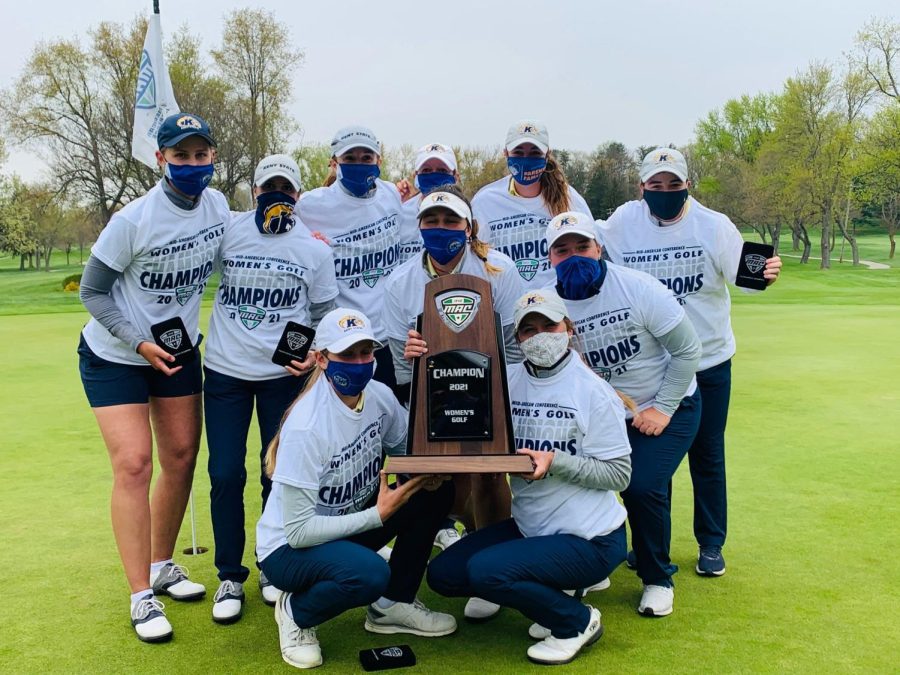 The Kent State women’s golf team poses with their 2021 MAC Championship trophy. No other team has ever won the MAC.

No other team has ever held the title.

The Kent State women’s golf team has been the only school to win the Mid-American Conference Women’s Golf Championship. This weekend the team added its 22nd straight conference title in Silver Lake, Ohio.

“It’s awesome to keep the tradition going,” coach Lisa Strom said. “We got cut short last year, so we didn’t get the opportunity. To pick up where we left off and continue that streak is very special. We know what it means every year to keep it going.”

The team finished at 14-over-par 878, 36 strokes ahead of second-place Northern Illinois University.

It was also the team’s third consecutive tournament win. Last weekend the Flashes beat every team in the Big Ten Conference in a tournament in Bloomington, Indiana.

“Playing at the Indiana Invitational last weekend was a tough test, so I think they were a little bit tired,” Strom said. “But once this Friday rolled around, they knew it was go time. We struggled getting out of the gate a little bit, but they finished strong Friday evening. They played a great second round, too, and that’s what separated us.”

All five KSU players finished in the top 10 in the tournament.

Sophomore Caley McGinty won the tournament with a 4-under 212. She was also named MAC Golfer of the Year.

“In the middle of that first round yesterday, Caley was in a bit of a funk,” Strom said. “She made a very uncharacteristic double bogey on a par five.

“We were standing on the 17th tee box, and I looked at her and said, ‘Do you want to have a chance to win this? If you get over it and move on, you still have a chance.’ That snapped her out of it, and from that point on, she really checked in.”

It was McGinty’s second tournament win of the season.

“It is a testament as to why she is named our conference player of the year and why she was an All-American last year,” Strom said. “She just works tremendously hard.”

Junior Emily Price came in second with a score of 1-over 217.

“Emily is very self-sufficient out there,” Strom said. “She’s able to handle herself.”

“Having all of them finish in the top 10 means a lot to our program,” Strom said. “They take a lot of pride in their individual play and making sure they’re doing what they need to do to make the team successful.”

The team next heads to the NCAA Regionals.

“Postseason is a whole new ball game,” Strom said. “We’ve got some work to do. This was not our best effort, and this was not our best on paper statistically. But overall, we got the job done in a big way. At the end of the day, you have to make sure to enjoy these wins.”

The selection show for regionals will be on Wednesday at 2 p.m. on the Golf Channel.

Pilar Lewis is a sports reporter. Contact her at [email protected]