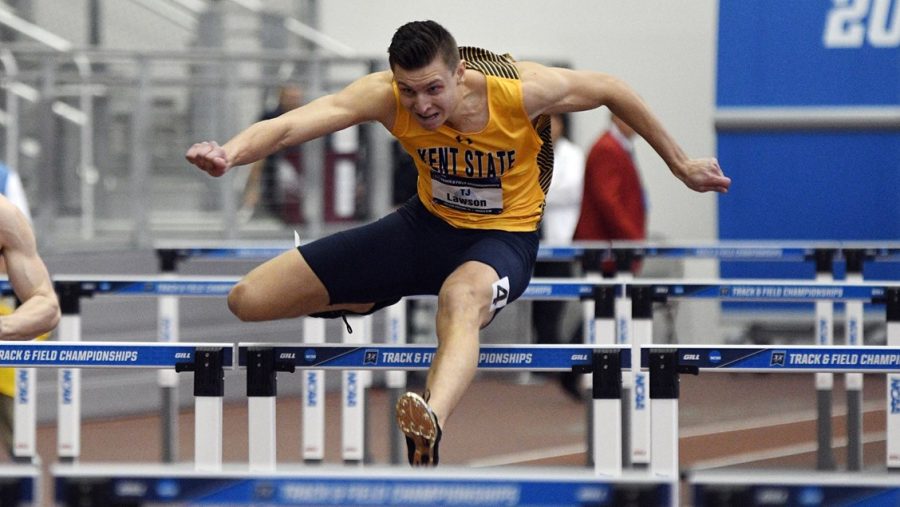 Kent State's TJ Lawson jumps during the 60-meter hurdles, which he finished with a time of 8.36 seconds. Lawson placed fifth in the heptathlon at the 2018 NCAA Indoor Track and Field Championships in College Station, Texas.

“I feel very proud that my training throughout the season is paying off,” Stevens Jr. said. “I am so ecstatic that I’m seeing the results that I was hoping for.”

Stevens mark of 53 feet, 1.5 inches in the triple jump gave him second place overall at the meet — first amongst collegiate competitors — and also ranks him second in program history.

The Flashes had two athletes place first at the Tennessee Relays this weekend.

“I feel like it’s a confidence booster from indoor season,” senior sprinter Riak Reese said. “I think I’m allowing myself to let things come more natural instead of pressing too much for it. I have a lot to work on, so it gives me the confidence of where I know I can be in the end.”

Reese placed first in the 100-meter dash with a time of 10.18 seconds and also hit a personal record. This time ranks him ninth in the country and third in Kent State program history.

“Outdoor (track) gives the chance to build on indoor since you’ve already had races under your belt,” Reese said. “For me, outdoor is my favorite, because indoor kind of gives you a good idea of where you’re at and where you can be.”

“It felt great to get outside,” Lawson said. “We’ve had a pretty rough spring in Kent, so being in the Tennessee sun definitely made the body feel good.”

Samory Fraga placed second in the long jump with a mark of 7.82 meters. This jump ranks Fraga as the school record holder for outdoor long jump. Fraga now holds both the indoor and outdoor school records.

In the men’s pole vault, Evan Lesnick took third place with a jump of 5.05 meters.

The Flashes return to competition April 20-21 at the Jesse Owens Classic in Columbus, Ohio.

Laurene Darby is a sports reporter. Contact her at [email protected]