OPINION: How photography led me to a journalism career 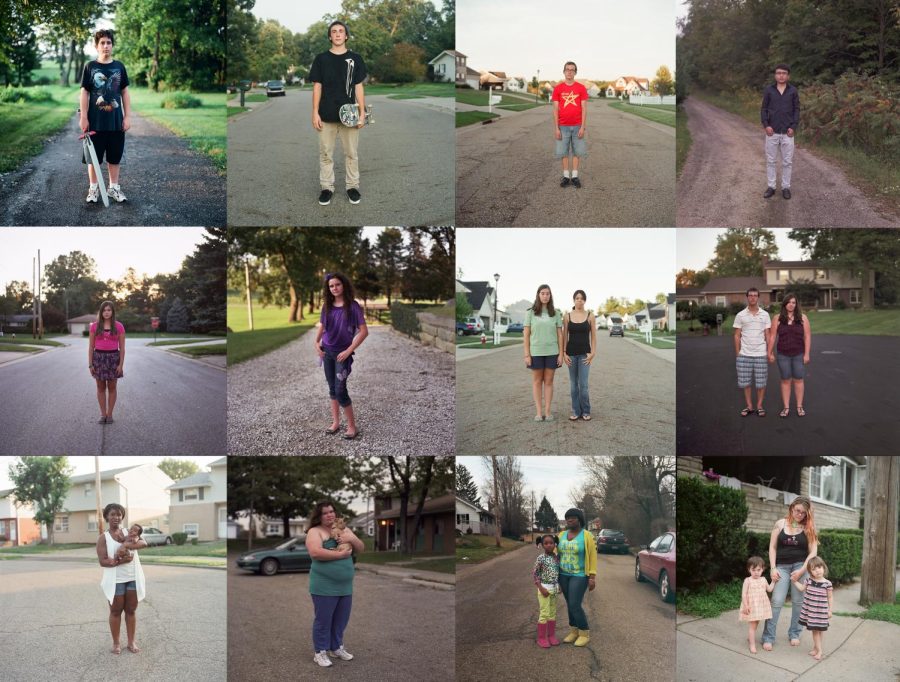 Kelly Krabill began taking street portraits during her time at Youngstown State University. She worked on the series for a few years and wanted to tell a visual story of each person in the image.

In 2007, I spent many hours at Youngstown State University dodging and burning my pictures in the color darkroom. I can still remember the room’s appearance. When entering the lab, I passed a large black bulletin board on the right-hand side. On it hung postcards of photography exhibits, applications for student photography competitions and MFA programs in photography. MFA stands for Master of Fine Arts. Straight ahead were six-foot-long tables that usually held students’ backpacks while they developed film. In front of the tables was a long off-white green-speckled counter. I would spread my several photo clippings from the darkroom on the countertop next to my friend Kristina’s prints. Each time I made a new print, I walked out of the darkroom, stood next to the counter and held the print next to the previous prints to see if I finally had the perfect gallery-quality photograph.

At that time, I was working on a series of street portraits. The subjects didn’t smile because I wanted to show depth on their face that told a story. I rarely posed the people in the photographs because I wanted their natural self to show in the image, even if they felt awkward. I just waited silently through their awkwardness, or I captured their emotion of uncertainty.

I spent a lot of time waiting for my images to print. The color darkroom had a large white printer and I would slide my exposed photo paper into it and while sitting in darkness, Kristina and I stood next to the printer waiting for the prints to come out on the other side. The process took about five minutes so sometimes I would walk into the lab, grab a snack or check out the new material on the bulletin board. There was a flyer I revisited many times: the MFA program at the School of Visual Arts in New York City. I studied the application process and admired the student artwork, envisioning myself studying there.

My dad and I took a trip to New York City a few years after I graduated with a Bachelor of Fine Arts degree in photography from Youngstown State University. The School of Visual Arts was having an open house for potential students to bring their portfolios for professors to review. I couldn’t believe I was standing among some of the most prestigious professors and talented students.

The program offered intense training on telling a compelling visual story. That’s all I ever wanted: to tell a story about a person’s life who needed a platform to share it.

The other potential students and I gathered around the white-haired professor as he reviewed each portfolio. He grabbed my light-brown semi-large leather portfolio on top of the pile of other masterpieces and opened the first page. He didn’t say anything for the first few pages. With immense anticipation, he then began giving me feedback. He said overall my portfolio was boring but said one of my images had “poise.” I could work on boring, even though I loved my street images, but I will never forget how proud I felt for the professor to compliment the portrait of my cousin wearing an orange hoodie.

I worked on my portfolio some the following year before applying to the program, but I didn’t get in. And I was devastated.

Sometime after I received the rejection letter from the School of Visual Arts, I started working on a series of photographs of family members. Many of the images had my relatives standing in the street, but I tried to be more creative and placed them on their porch, or on a swing, or inside their home.

I realized how interesting it was to photograph my family in their setting and try to show the relationship between each subject.

A few years passed by and my nephew was born. The first grandchild. I wanted to document his every move and each milestone along the way. I was intrigued with family photos and the relationship of the people within the photos. One day I decided to Google family documentary photography and a list came up of other photographers who actually did that for a living.

I began practicing this style of photography with many of my friends’ kids and I took a few workshops about family documentary photography to learn the genre better.

Amid finding this new passion of storytelling, I worked in the health insurance industry for a long time and was restless. I wanted to tell compelling stories, but what did that look like in a job? I started putting my thoughts together, wrote down my goals, listed my strengths and weaknesses and realized a content creation job was what I could do. However, that kind of job would require a degree in journalism or public relations.

I was really interested in journalism as opposed to public relations because journalism told stories about people more than about corporations.

It was April 2019. I felt like the chapter of my life working in health insurance was coming to a close and I needed to do some research on what to do next. Could I enroll in an online program and still work? Would I be spending a lot of money on student loans to take an online program and not be hirable? Kent State’s journalism program looked really good, so I made an appointment with an advisor to see if they offered evening classes. They didn’t offer enough to get a degree.

I had some conversations with my mom about working for our family business while I go back to school full-time to make this new chapter of my life become a reality.

Nine months later, I walked into Franklin Hall to attend my first class: Writing Across Platforms.

A year and a half into the program and the job I went back to school for has changed some as my interests have changed. Interviewing multiple sources from various perspectives, researching the topic and gathering information to explain the story more clearly all encompasses what I want to do for a living.

While each photograph has the potential of being strong enough to stand on its own and still work together with other photographs to create a dynamic body of work, words have the same effect. Using a specific word to describe a scene can enhance the overall story and build upon its layers of intrigue.

This last year has taught me to use my understanding of visual storytelling and transform it into the written word.