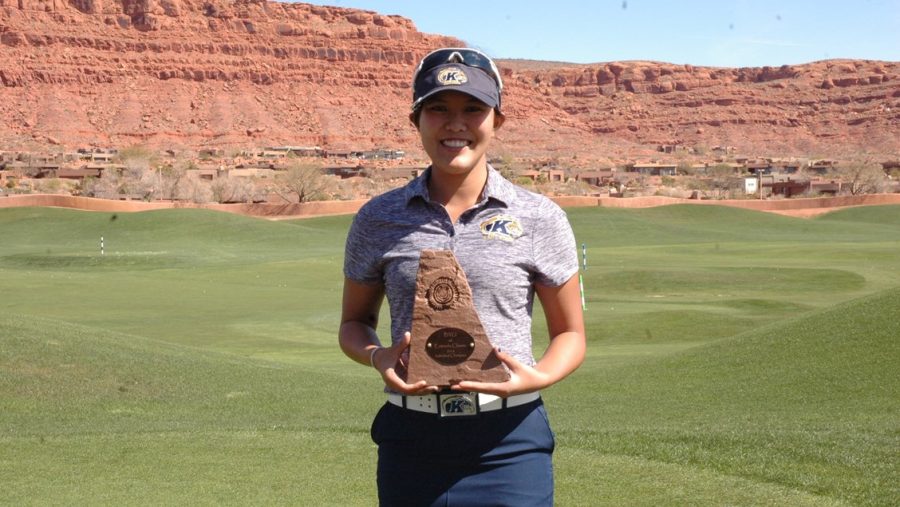 Kent State's Pimnipa Panthong poses with her trophy after coming in first place at the BYU at Entrada Classic. The Flashes finished second out of 14 teams.

Pimnipa Panthong will be joining nine other golfers on the international team at the 2018 Arnold Palmer Cup.

“I’m very happy and excited because it’s a big tournament,” Panthong said. “It’s going to be a fun and new experience for me.”

The international women’s team is made up of 10 golfers, six automatic picks and four committee selections. Panthong was one of the four golfers to be selected by the tournament committee.

“I think it’s a tremendous honor for her to get picked,” coach Greg Robertson said. “It’s a reflection on her hard work and how well she’s done.”

The tournament will consist of two teams: Team U.S.A. and Team International. Both men’s and women’s players from around the world will compete in the tournament.

“She’s going to be playing with some of the best amateur golfers on both the men’s and women’s side,” Robertson said.

Panthong has a number of awards under her belt. In 2015-16, she was a part of the Thailand national team, won the Singapore Junior Golf Championship in 2015 and was the 2017 Mid-American Conference golfer of the year.

Panthong is coming off a victory at the BYU at Entrada Classic, earning her MAC women’s golfer of the week honors.

The coach’s pick will be announced May 4. The Arnold Palmer Cup will be at the Evian Resort Golf Club in France from July 6-8.