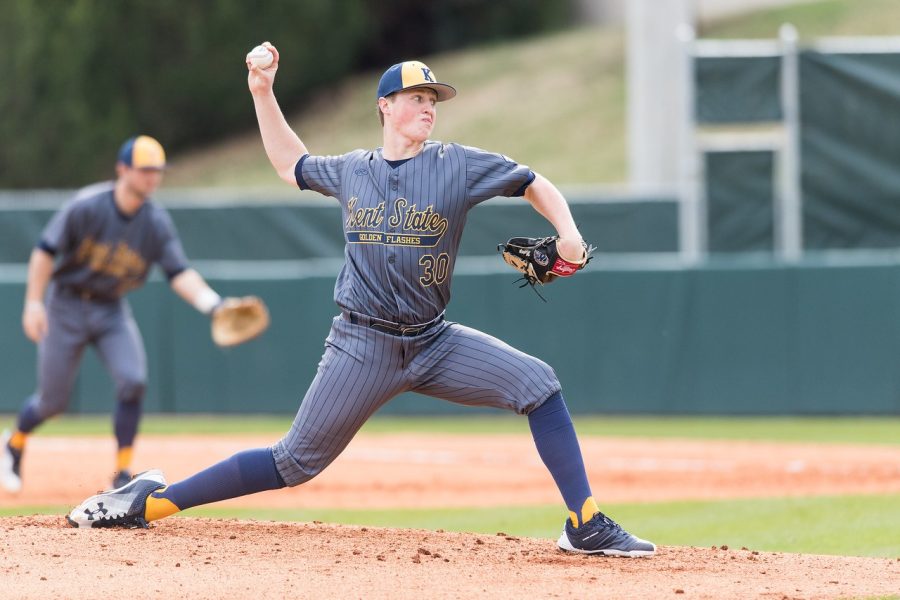 Kent State pitcher Joey Murray throws a pitch during the Flashes' 3-1 win over Lipscomb on Feb. 24, 2018. Murray struck out seven in a no decision.

Pitching was the key of the weekend for Kent State (9-6), as both of their wins at Western Carolina on the weekend involved a solid performance from the starting pitchers and bullpen. The only loss came on Sunday afternoon after senior pitcher Jared Skolnicki allowed six runs in 2 ⅔ innings.

Kent State started this game as they have started many games this season: scoring in the first inning. The Flashes have scored in the first inning in six of their last seven games. They scored their first run of the day when junior third baseman Pavin Parks doubled down the right field line to score senior right fielder Nick Kanavas.

Western Carolina responded by scoring three runs through as many innings. However, the Flashes answered in the fourth inning with two runs to tie the game, 3-3, after sophomore designated hitter Patrick Ferguson crushed a two-run home run to center field that scored senior first baseman Brad Hamilton.

Hamilton had a huge impact on the game. He hit a home run when he was behind in the count in the eighth inning to knot it up at 4. He also drove in a run after a groundout to extend the Kent State lead to 7-4 in the ninth inning.

Junior pitcher Connor Wollersheim finished the day after allowing just three runs on eight hits with four strikeouts and no walks through five innings. He earned a no-decision.

Both teams were held scoreless until the third inning when Kanavas doubled down the third base line, scoring senior left fielder Reilly Hawkins to put the Flashes up, 1-0. They would add three more runs in the fifth inning to extend their lead to 4-0. The difference maker was junior pitcher Joey Murray. He struck out 10 batters, while also allowing just three hits and no runs in six innings.

The Flashes stumbled slightly after pulling Murray; they allowed Western Carolina to tie the game at 4 after nine innings. In extra innings, senior catcher Tim Dalporto drove in two runs with a single to secure the series win for the Flashes.

The Flashes’ batters also had their fair share of trouble, striking out eight times. Both runs were scored off of a single by Parks that scored Kanavas and Mason Mamarella.

Kent State will continue its season as it plays Youngstown State in its home opener at 4 p.m. Tuesday at Olga Mural Field at Schoonover Stadium. This will be the first game of a four-game home stand.