‘We are done’: Students demand action on gun laws 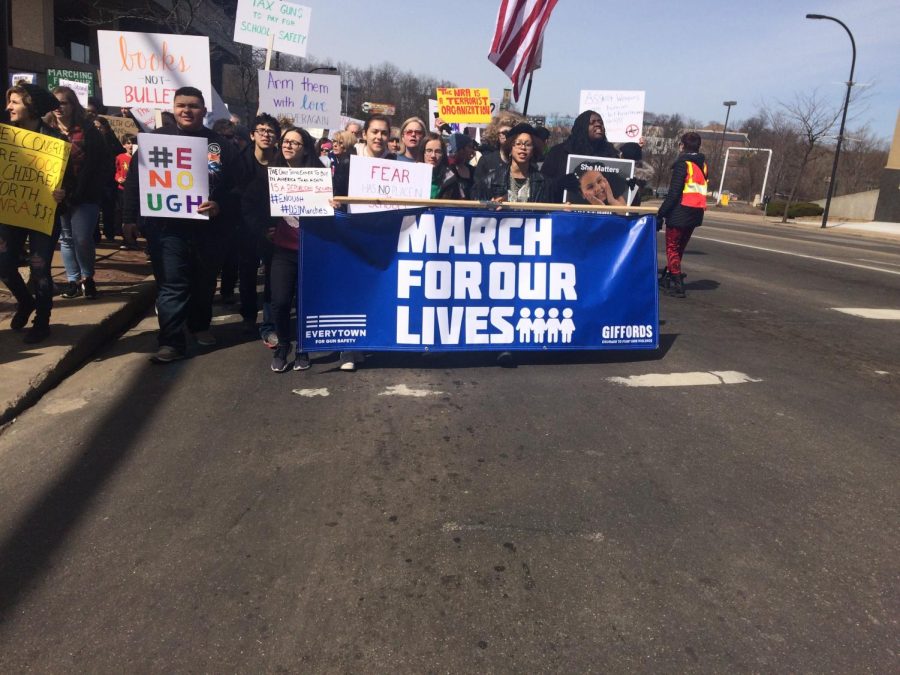 Hundreds of people marched in Akron for the March for Our Lives protest on Saturday, March 24.

Hundreds of thousands of people across the nation joined together to support gun reform; Akron was no exception.

About 300 people showed up to prepare for the march around 10:00 a.m. An hour later, almost 1,500 people filled the parking lot, a number larger than what was anticipated on the march’s Facebook event page.

This was Marth Hutchison’s first time ever participating in a protest. She even brought along her daughter, Olivia.

Olivia registered to vote when she arrived. She, along with her mother, felt very passionate about gun reform.

“It’s the same shit, different decade,” she said, referring to a poster she saw earlier in the day. “We’re hoping for change. Politicians have to actually see what’s happening to our nation.”

Martha is a gun owner herself and doesn’t believe in taking all guns away from people. However, she believes our nation shouldn’t need assault rifles.

“I understand it’s about protection. Everyone should be protected if they choose so to do,” she said. “But we don’t need ARs. That’s not for protection. That’s for killing.”

Lillie Balit, a senior at Cuyahoga Falls High School, organized her school’s walkout demonstration on National Walkout Day.  She is passionate about protecting her classmates and believes stronger gun laws needs to be formed.

“Congress needs to stop influenced by the NRA (National Rifle Association),” Balit said. “Money is not the issue.”

Cuyahoga Falls High School student Meredith Gallagher, who also organized the Akron march, stood on a platform in front of the crowd with a megaphone and thanked everyone who came out.

Meredith, 15, was one of the main planners in organizing the march. She started planning it after the mass shooting in Parkland, Florida where the shooter’s riot left 17 dead.

Meredith started a GoFundMe fundraiser on March 3 for the March For Our Lives with a goal of $2,000. After 61 people contributed to the fundraiser, Meredith was able to raise over $2,100 in a matter of three weeks.

She was then joined on the platform by several of her classmates and local politicians who helped her plan the event, including Akron Mayor Dan Horrigan.

“I’m extremely proud of all of you,” Horrigan said to the students in the crowd. “You guys are more than the future. You are the present and you are the now.”

Demonstrators then huddled together on the 800 block of W. Market St. and began marching two miles northwest toward downtown Akron while being escorted by Akron Police cars.

The crowd stretched more than half a mile along the road. During the walk, chants rang out: “We are done. Enough is Enough.”

The march stopped at the Summit County Courthouse on S. High Street. More speakers — most of them high school and college students — spoke to the large crowd about their frustration and stating change needs to happen.

Josephine Basile, a student from Firestone Community Learning Center in Akron, read a poem she wrote to the crowd.

“…When we hear an announcement, we shouldn’t have to hold our breaths,” she said. “When we hear a fire alarm, our first thought should be to find an exit, not a hiding place.”

Josephine ended her poem with a question for state legislators to reflect: “This is not reality you grew up in, so why are you so insistent on it being ours?”

The march ended in the early afternoon and demonstrators began walking back to their cars.

As people walked by Zion Lutheran Church and School on S. High Street, they walked past a post on the front yard.

Engraved on the post: “May peace prevail on Earth.”

Brandon Bounds is the enterprise reporter. Contact him at [email protected]