Conel leads Flashes at day one of NCAA Championships 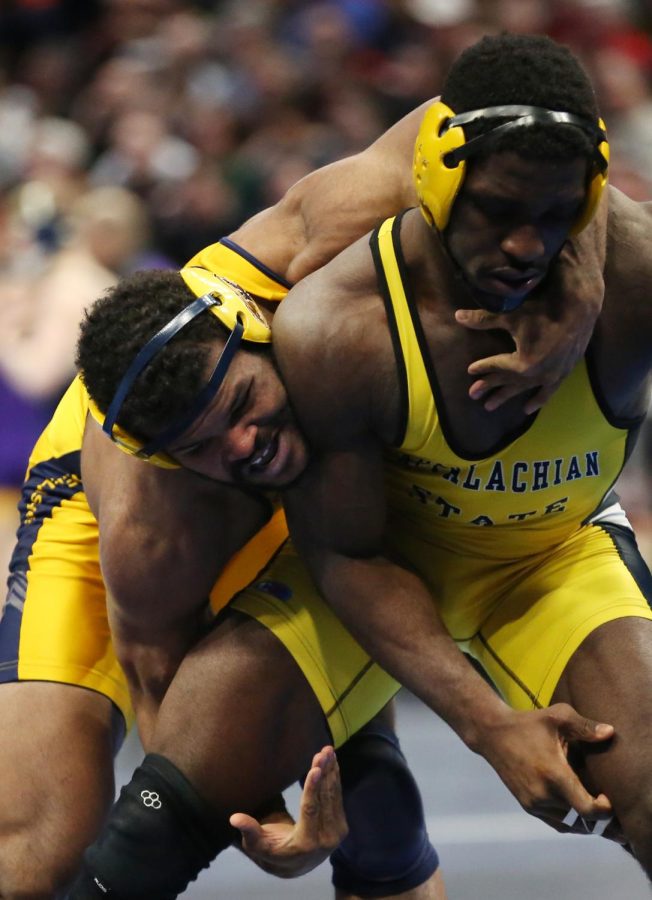 Kent State's Kyle Conel grapples with Appalachian State's Randall Diabe during day one of the NCAA Wrestling Championships at Quicken Loans Arena. Conel won all three of his matches on the day.

Among the 18,000 attendees at day one of the NCAA Wrestling Championships in Cleveland, four Kent State wrestlers came out to fight.

Kyle Conel, Casey Sparkman, Anthony Tutolo and Stephen Suglio all came to Quicken Loans Arena for an opportunity to wrestle for a national title.

Out of 330 wrestlers competing Thursday, Conel was the only one to go 3-0 in his matches.

Conel has made a comeback from a year off from wrestling — not even seeded in his 197-pound weight class — and pulled off three wins Thursday, making a name for himself by booking a trip to the quarterfinals.

“It feels pretty good to be back,” Conel said. “I feel like I’m right back where I wanted to be, and I’m peaking at the right time during the year. My plan is to not change anything in my wrestling, keep my mindset the same. I think I can beat anybody.”

Conel won first in a pigtail match, won his second match, 5-0, and his final match of the day, 8-2, to allow him to continue in the tournament.

“I feel like I have a crazy amount of momentum,” Conel said. “I’m feeling awesome, and every week just keeps getting better and better. I started off slow, and I feel like I wrested really well in my second match. Everything feels like it’s going up, and I’m excited for tomorrow.”

Conel will be wrestling in the quarterfinals working toward an all-American spot (top eight wrestlers) and a championship title against No. 1-seeded Kolin Moore from Ohio State.

Tutolo took down North Carolina’s Zachary Sherman by a final score of 5-2 in his first match to get him a spot into a second match in the championship.

Tutolo finished the first night of the championship with a loss against Michigan’s Stevan Micic with a final score of 12-3.

For the rest of his matches, Tutolo says he needs nothing but his self-confidence.

“I just believe in myself, believe in my shots,” Tutolo said. “Nothing else matters on what happened before. It’s only now.”

“He’s good at winning close matches,” Kent State coach Jim Andrassy said. “We just have to keep him relaxed the best we can, but like I said, there’s going to be nerves. That’s a part of sports, so the great thing about wrestling is going out there by yourself.”

Suglio lost in the first round from a pin against Penn State’s Nick Nevills. Suglio will automatically continue to the next round Friday due to a forfeit victory over an injured Gage Hutchison from Eastern Michigan.

“He’s got to keep on going, just got to keep on progressing into the tournament and wrestle a full seven minutes,” Andrassy said. “He’s got a wonderful match up, and then you start winning, putting them together. You can kind of get on a roll, and that’s what you go for.”

Sparkman (157) lost to Mitch Finesilver from Duke in his first round and Ian Brown from Lehigh for his second, leaving the tournament with not a single win or progression.

“He qualified for the national tournament, which sometimes for the kid is a highlight just to qualify,” Andrassy said. “So maybe he got caught up in being happy he was here because the matches were winnable. I think at the end of the day, you’ve got to ask him, ‘what are your goals? What’s your purpose? And for next year, what are your plans as far as how you’re going to improve and get better to try and come back here (NCAA tournament) and at least make some noise?’”

Suglio, Conel and Tutolo will all wrestle during day two of competition, beginning at 11 a.m. Friday at Quicken Loans Arena in Cleveland.

Kayla Proctor is a sports reporter. Contact her at [email protected]