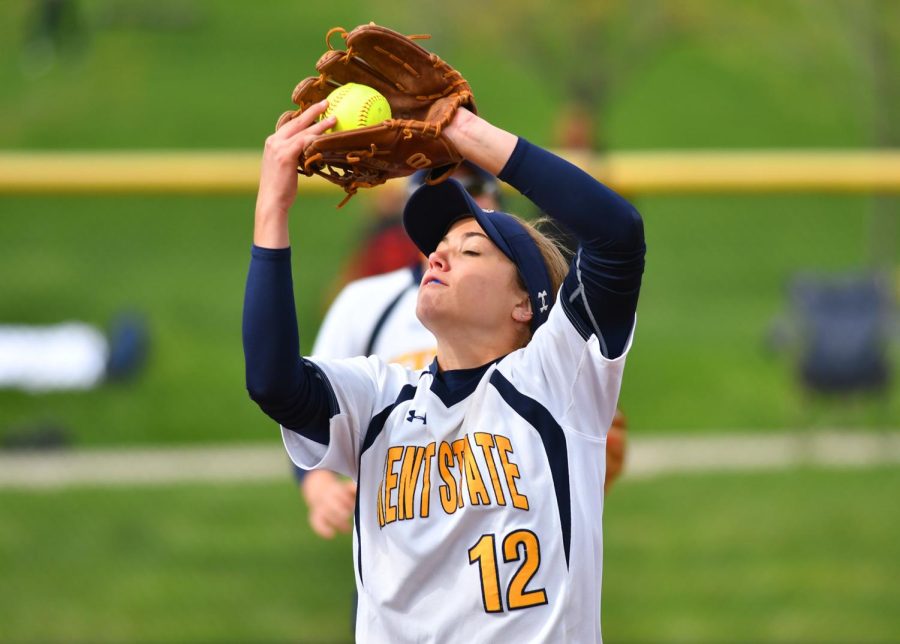 The Kent State softball team went 2-1 this weekend at the Racer Classic in Murray, Kentucky, thanks to prolific offense and relentless effort from the entire team.

“It was an all-around great team effort,” said coach Eric Oakley. “Emily Dobbin played a huge part for us offensively, and the rest of the team was able to get on base and give us the opportunity to score runs.”

Dobbin, a senior outfielder/pitcher for the Flashes (11-7), went 8-for-12 this weekend, scoring four runs and tallying four RBI as well.  Her lone extra-base hit of the weekend provided two key runs to seal the victory against Evansville on Saturday.

In both victories, Kent State found themselves fighting to come back after forfeiting an early lead.

“The team did a great job of fighting back and securing the victories in both games,” Oakley said. “We just need to focus on tightening up our defense and limiting opposing teams’ chances because those chances will lead to runs.”

Oakley believes the tournaments at the beginning of the season have allowed the team to learn a lot about themselves.

“I think these games at the beginning of the season really give us a good look at who the starters are going to be,” Oakley said. “Also, it provides the entire team with experience and playing time that will be key when we need to rely on our bench during the remainder of the season.”

Kent State struggled to get things going through the first four innings, stranding five runners on base. In the top half of the fifth, the Flashes got two on base thanks to a Hunter Brancifort walk and a single by Kaitlyn Miller. With two outs, Emily Dobbin was able to poke a single through the middle, scoring Brancifort to put the Flashes up, 1-0.

However, the lead didn’t last long. In the bottom half of the inning, the Flames capitalized on an early walk with a two-run homer by Alyssa Griman to make the score 2-1, which would be enough to secure the win. Despite throwing a complete game and only allowing three hits and two runs, Madi Huck was given the loss on the mound, which moved her to 6-2 on the season.

The Flashes were able to start strong against Evansville, scoring two runs in the first inning thanks to an RBI single by Holly Speers and a wild pitch that scored Kennadie Goth.

Kent State found themselves having to fight to regain the lead after a three-run homer by Evansville’s Megan Florey in the fifth made the score 3-2 in favor of the Purple Aces. In the bottom of the inning, Dobbin added to a nice statistical day with an RBI double to tie the game. Speers would also drive in Dobbin with an RBI single to put the Flashes up by one.  In the next inning, Dobbin added a few insurance runs with a two-run double to put the Flashes up, 6-3, and seal the win. Huck (7-2) picked up the win after 2.2 innings of relief work, allowing one run on three hits, striking out six.

Kent State got out to another fast start, this time against Oakland, scoring two runs in the first inning thanks to an RBI single by Kaitlyn Miller to make the score 2-0 early. Speers tacked on a solo homerun in the third inning, and Carlee Selle added an RBI double in the fourth to make the score 4-0.

Oakland’s bats came alive in the fifth when Madison Jones hit a two-run homer to narrow the gap. In the bottom half of the inning, Speers would go on to hit a sacrifice pop fly in foul territory in left field, which would score a run to increase the lead to 5-2.

In the sixth, Oakland would take the lead thanks to an RBI double, a two-run single and a fielder’s choice, giving the Golden Grizzlies a 6-5 lead.

In the bottom of the seventh, Kent State’s Bailey Brownfield won the game with a walk-off single. Overall, four of Kent State’s seven runs, including the tying and winning runs, were unearned. Olivia Sborlini got the win in relief for the Flashes, allowing one hit and two runs in 2.0 innings of work.

After falling behind quickly against Murray State, the Flashes were tasked with clawing their way back.  The Flashes were able to narrow the lead slightly to 13-6, but the game was cancelled in the top of the fourth inning due to rain. None of the stats were made official.

The Flashes return to the diamond March 17-18 to play a three-game weekend series at Penn State.