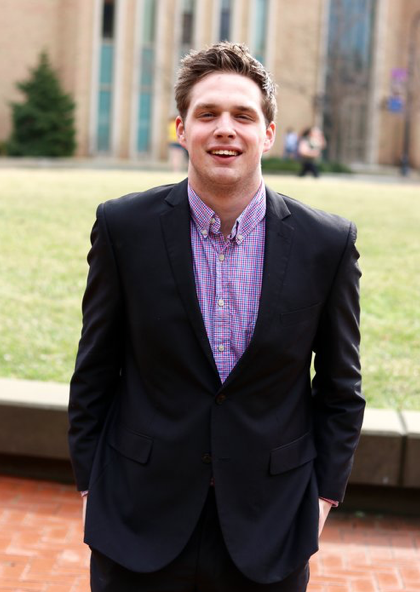 Candidate for Director of Governmental Affairs

What is your platform?

“First thing I really want to get done is voter registration. Not only during election years, but during every year. I wanna have booths to increase students awareness in the political process. That way they can elect lawmakers that are looking out for the best interest of students. I want to bring around political readers and policy makers to Kent State to give speeches and presentations from both sides of Ohio so students can hear from different voices and make their own judgments on what’s going on. I really think USG needs to be more transparent and open with how everything works, and just be a bigger presence on campus which I would really like to do. While also increasing mental health services and setting up programs for minority students, so this can be an all inclusive campus climate.”

Why should people vote for you?

“I think after being at Kent State for almost three years now, I really think as a political science major too I just enjoy looking at policy and how it adopts changes over time. With that being said, being aware of it, I would like to pass on that information while speaking to local representatives.”

What changes are you looking to enact?

“Like I said before, increasing voter turnout not only in elections like statewide and federal, but also USG elections. I want more students to be involved on campus, be aware of what’s going on and just fight for their rights as students.”