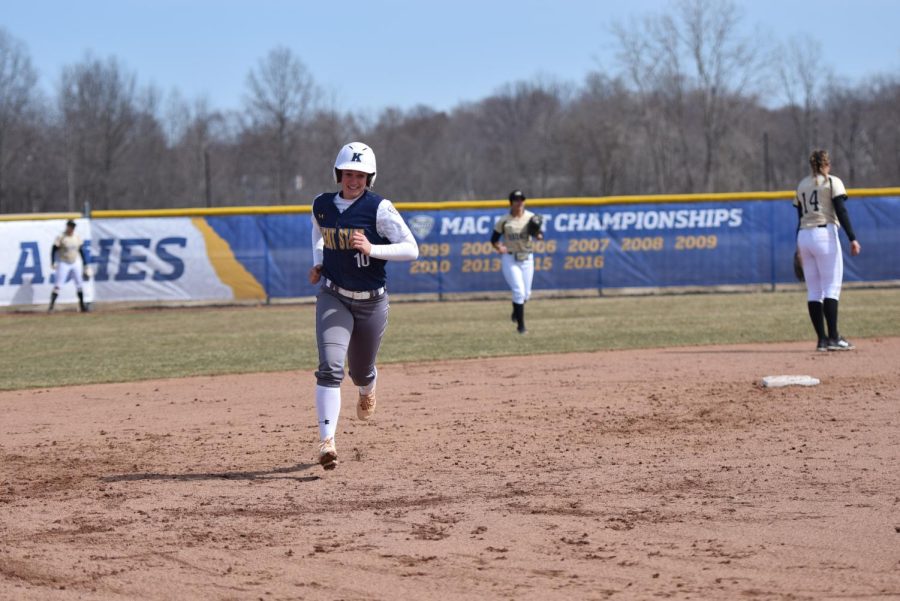 Kent State senior shortstop Holly Speers smiles as she rounds the bases on her eighth home run of the season during Kent State's 8-7 win over Western Michigan on March 24, 2018. Speers went 1-for-2 with nine walks on the weekend.

The Kent State (14-10, 2-1 Mid-American Conference) softball team started off its conference schedule with two dramatic wins over Western Michigan (14-13, 1-2 MAC) Saturday before falling to the Broncos in the series finale Sunday.

The Flashes found themselves in a 4-0 hole after the fourth inning thanks to three RBI from Broncos shortstop Brooke Wyman. Kent State cut into that lead in the bottom half of the frame with a two-run home run from Holly Speers, her eighth of the season. It was one of the few opportunities Speers had over the weekend, finishing the series 1-for-2 with nine walks.

A double from Western Michigan’s Samantha Coffel gave the Broncos a commanding 7-2 lead after the top of the sixth inning. In the bottom half though, the Flashes exploded for four runs, and a seventh-inning single from center fielder Maria Cegledy sent the game to extra innings tied at seven.

The Flashes walked off in the bottom of the ninth inning when Bailey Brownfield reached on an error from Western Michigan’s Mackenzie Swinehart, allowing Emily Dobbin to score.

Brenna Brownfield earned the win for the Flashes, tossing two shutout innings in relief to shut the door on the Broncos.

Whereas sophomore pitcher Madi Huck struggled in the front end of Saturday’s doubleheader (six runs on 10 hits in four innings of work), she had no such problem in the night-cap.

Huck started the second game as well and put in a dominating performance in the circle, outdueling Western Michigan junior Anissa Sanchez. Huck went the distance for a complete game shutout, striking out four over seven innings, giving up just three hits.

Cegledy had the lone RBI for the Flashes, whacking a double to right field in the sixth inning to score pinch runner Sydney Anderson.

Sunday’s series finale didn’t have the drama the first two games did.

The Broncos leaped out to a 7-0 lead through the first four innings, capped off by a solo home run from center fielder Aspen Williams. Kent State starting pitcher Brenna Brownfield was chased from the game after the inning, finishing the day with four innings pitched, giving up seven runs on 10 hits while not recording a strikeout.

Kent State’s lone run came in the bottom of the fourth on an infield single from Vanessa Scoarste, scoring Anderson, who was pinch running again.

The Broncos added a run in the fifth, then put the final nails in the coffin in the sixth, thanks to a solo home run from pitcher Sydney Stefanick and a bases-loading, bases-clearing double from Coffel.

Kent State returns to the diamond for a three-game midweek series set between Baltimore and Washington, D.C., beginning against Mt. St. Mary’s (7-13) at 1 p.m. Tuesday.