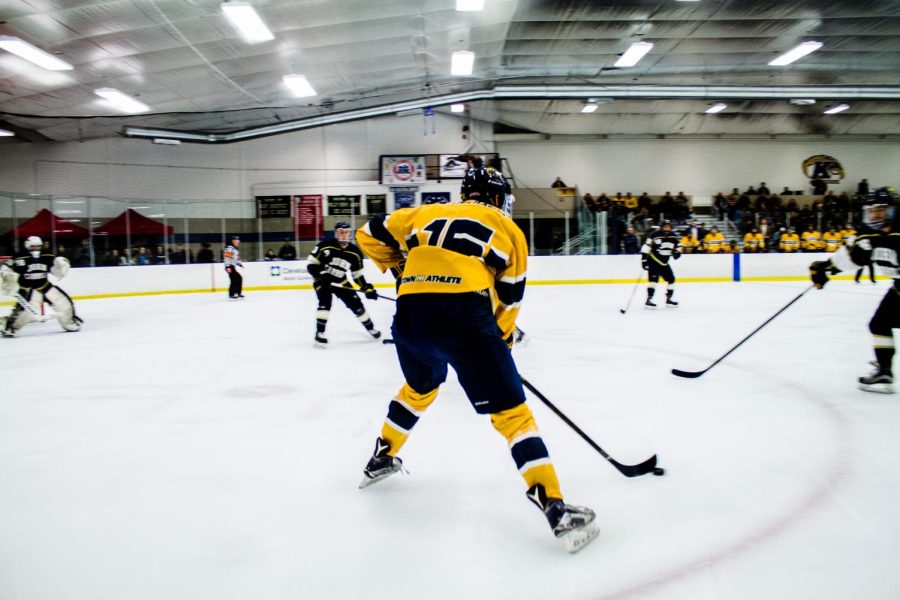 Kent State forward TJ West carries the puck through the offensive zone during the Flashes' 9-2 victory over John Carroll on Friday, Jan. 19, 2018. [FILE]

Although the Kent State men’s hockey club was unable to qualify for the national playoffs and fell short of a league championship, the 2017-18 season was one to remember.

The Flashes ended the season with a 25-10-1 record and broke a couple team records.

“At the beginning of the year, the team set a list of goals they wanted to accomplish for the season,” said coach Jim Underwood. “Some of them were to reach the national tournament, compete for a league championship and to increase both team offense and defense. While we didn’t quite achieve the national playoff berth or the league championship, nothing can be taken from this team and the goals and records they did achieve.”

Among the goals the team did achieve were increasing team offense, including its power play percentage, and increasing its defensive presence by allowing fewer goals and being more disciplined.

On its way to 25 victories, the team had a mid-season stretch where it won 16 out of 18 games.

“I thought the team did extremely well in all aspects this season,” Buttitta said. “Even though we didn’t make nationals, our team still played very well for most of the year. The team is getting progressively better each and every year, and I believe that is one thing we should be most proud of.”

The Flashes will lose six seniors before next season, including Buttitta and Mike Sullivan. Both were on the team’s first line.

“I’m sure most teams can say this about their seniors, but they will truly be missed,” Underwood said. “They provided a lot of leadership and offense for our team. Needless to say, the rest of the team will have big skates to fill.”

Junior Xavier Sudlow had plenty of great things to say about the seniors.

“We were lucky to have a really good senior class that led us to the most wins in a while for this program,” Sudlow said. “It will be difficult for us to top that.”

It will be up to the underclassmen on the team to step in and pick up where the Flashes left off this season.

Sudlow is one of the underclassman who will be depended on greatly next season.

“We are still bringing back impact guys with another season of experience,” Sudlow said. “The key will be developing an identity that will fit next year’s team and really drill that home.”

Sullivan, the team’s captain, had some key advice for the underclassmen.

“They have to be leaders on and off the ice and play with confidence,” Sullivan said. “Also, championship teams show up to play with the same identity night in and night out. Most importantly, they need to have fun and play every game like it’s their last.”

Underwood preached experience as a key reason this team will continue to succeed.

“You can’t put a price tag on experience,” Underwood said. “For example, one of our freshmen, Jason Smith, suffered a season-ending injury in October, but he was with us at every practice, meeting and game, learning everything he could for next season. Whether it be mental or physical, all experience is important, and eventually we will begin to see that experience translate to the ice.”

Underwood and the rest of his coaching staff now will shift their focus to recruiting.

“All the credit for our excellent recruiting has to go to Zach Nowak,” Underwood said. “He has done an excellent job bringing in great players the last few years, and we are excited to see what he does this time around.”

Integrating the incoming recruiting class will be key in how the team performs next season.

“With new guys coming in, the most important thing is making those guys feel welcomed and establishing the same tight-knit, family aspect we had this year,” Sudlow said.