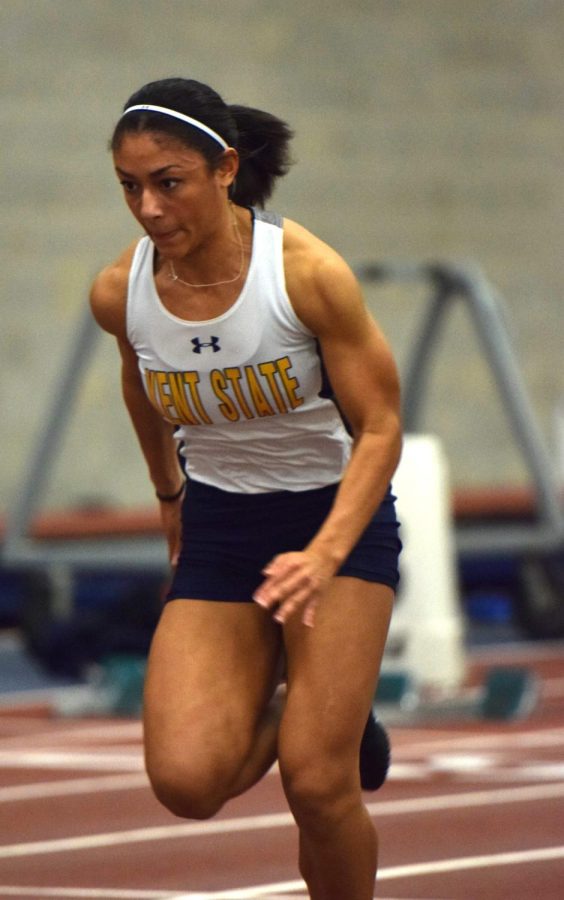 A Kent State runner races in the women’s 60-meter run during the Kent State qualifier at the Field House on Saturday, Feb. 10, 2018.

“I haven’t really been focused on my place finish,” Reese said. “I’ve been more focused on how I’m executing my race and how I’m running, like my times and everything. It’s nice to win, but I don’t really pay too much attention to the wins.”

“I’m just trying to be prepared for the national stage,” he continued. “I’m pretty sure I can come away with a win every week in those conditions.”

Tyler Williams took first place and also hit a personal record in the women’s 400-meter dash with a time of 55.29 seconds.

Mi’Angel Daniels took second place in the 60-meter hurdles with a time of 8.57 seconds.

“Mi’Angel equaled her mark from last weekend, which was a (personal record),” coach Bill Lawson said. “We were hoping for another drop but she didn’t.”

Lauren Burnett placed second in the 800-meter run with a time of two minutes and 14.71 seconds.

Clark Bookman took first in the men’s 3,000-meter run with a time of eight minutes and 34.29 seconds.

Samory Fraga took first in the men’s long jump with a mark of 7.73 meters, followed by TJ Lawson with a 7.47-meter jump.

Brad Jones took first in the men’s high jump with a mark of 2.06 meters, and Craig Stevens won the triple jump with a 16.17 meter leap.

Samantha Tollerude took second in the pole vault with a height of 13 feet, 5 inches.

Gabrielle Figueroa placed second in the women’s weight throw with a mark of 19.81 meters, and Jake Wickey placed second for the men with a 19.83 meters.

“We’re in a position to where we’ve set ourselves up for an opportunity to take a run at the (Mid-American Conference) titles,” Lawson said. “We just have to execute these next two weeks. Get people rested, healthy and mentally focused on what the task is at hand.”

Laurene Darby is a sports reporter. Contact him at [email protected]