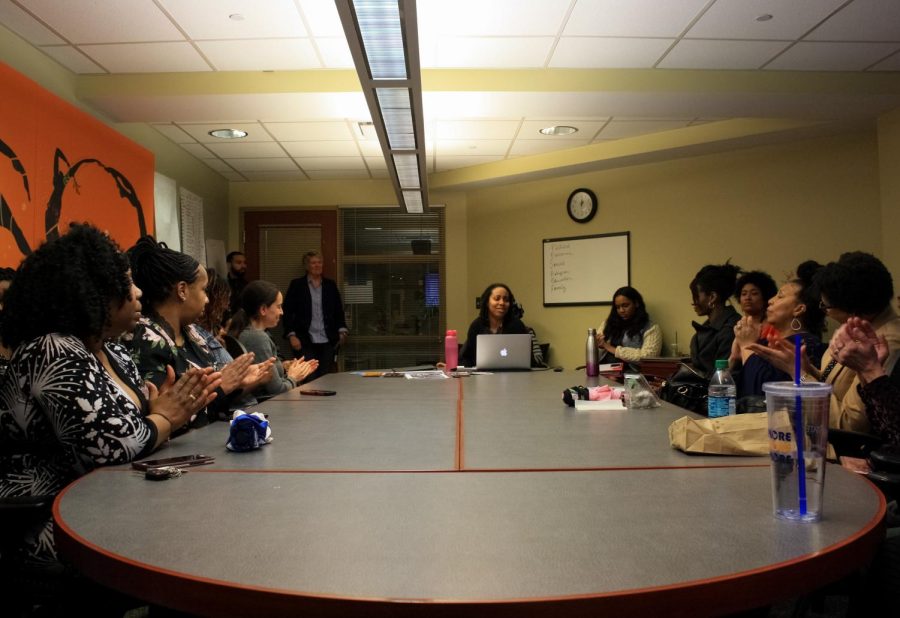 Christa Porter leads a luncheon, speaking on the identity of African-American women in their communities on Feb. 21, 2018

Christa Porter led the first lunch and learn event by the Institute for African American Affairs.

In her speech, Porter told the audience that the identity development in black undergraduate women encompasses both precollegiate and collegiate socialization, articulation of identity and interactions with others.

Porter’s presentation, “Black Women in Higher Education: Identity, Intersection, Interaction and Influences,” began with describing her motivation for the research and why she chose to share it with everyone.

“I stand on the shoulders of giants,” Porter said. “Black women who shed blood, sweat, tears and even their lives so that I could learn in the educational institutions through which I have matriculated; so that I am able to sit at administrative tables or stand in front of classrooms in order to be a part of change.”

After working on the research for a year, Porter went back and revised it to adapt with the changing times and cultures.

“We have this new identity called ‘Black Girl Magic,’ and it has this perception that black women are supposed to be perfect all the time and that we don’t make mistakes and can’t have bad days, but we know that isn’t true,” Porter said.

Black women are learning how to not only survive as black women in addition to all of their other identities, but they are also navigating a predominantly white climate that may not present the most welcoming space, Porter said.

Subjects in Porter’s study were women who found themselves as the only black women in a class, or among few.

“Black women are graduating at faster rates than men. The retention rates are low and yet still we are seeing so, such low numbers in classes. Black women are usually the only of their kind to be in a classroom. Think of our STEM majors, our nursing majors,” Porter said.

Mentorship was a key finding in Porter’s research. Stating the support of black women on campus is crucial to identity.

To close out her talk, Porter discussed the problems with black women and how she has in the past been affected by the theory that black women can’t work together.

“I’ve been burned… by black women… let that sink. I’ve had my work stolen. I’ve had my ideas stolen. This is why I don’t tell anyone my dreams, because they take them away.”

Some of the audience felt the words of Porter and shared their gratitude for her coming.

Carmen Blakely-Adams, a lecturer of health sciences identified with Porter’s views on black women moving up in the world.

“I did not come here to cry,” Blakely-Adams said. “I feel that she spoke and touched everybody here as a female black faculty member.”

Blakely-Adams said she’s been fighting for recognition of her work.

“I started here as a doctoral student, full-time faculty member, taking care of three children… going through a divorce and teaching over 500 students… and fighting to get people to realize I have more experience as a registered dietitian than anyone I work with and have been published multiple times,” Blakely-Adams said.

Porter said during this research journey she learned a lot about herself.

“There’s a vision inside me that people haven’t seen yet. Even though I’m giving birth to something, it might change. I learned when it’s time to go from certain situations,” Porter said.

Porter reminded everyone how important it is to rise up from stereotypes and be advocates toward change. She spoke on making pathways and making sure there is a seat at the table for everyone.

“This journey is not easy and it was not built for us,“ Porter said.

Erica Carter is the diversity reporter. Contact her at [email protected]