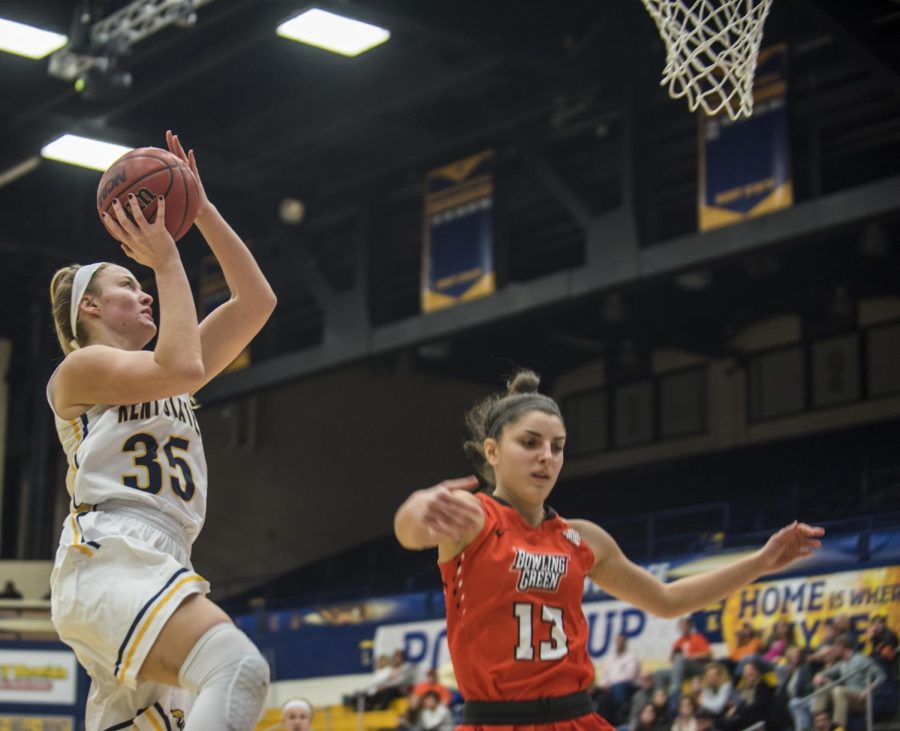 Senior forward Jordan Korinek drives to the hoop for two of her career-high 36 points against Bowling Green on Jan. 31, 2018. Kent State won the game, 81-57. [FILE]

Korinek checked back into the game about a minute into the second quarter. She scored 14 points in the period, shooting 5-for-6 from the field and 4-for-4 from the line.

However, the team shot just 8-for-27 from the field and 1-for-11 from three-point range. The Flashes’ remaining starters combined for just nine points in the half. Graduate student forward McKenna Stephens had five points, struggling from the floor, shooting 2-for-7. The team also finished the half with only four assists.

Buffalo had three players in double-digits after the first half. The Bulls shot 15-for-35 from the field and 4-for-11 from three, while also knocking down 7-of-9 from the charity stripe. The team also moved the ball well, finishing the half with 12 assists. Kent State trailed, 41-23, at the half.

The second half was even more of a struggle for the Flashes.

They could only muster 19 points on 5-for-35 shooting. Korinek was the team’s leading scoring with eight points in the half. However, she struggled from the floor, shooting just 1-for-9. She scored the rest of her points from the free-throw line (6-for-10).

Junior guard Alexa Golden was the only other starter to score during the second half (1-for-2 from the line). The rest of the Flashes’ points came from the bench. Sophomore guard Megan Carter scored four points shooting 2-for-5 from the field, and freshman guard Erin Thames added three points.

Kent State shot an uncharacteristically low percentage from the line. The Flashes finished the game 15-for-24 (62.5 percent). Entering the game, they were the second-best free-throw shooting team in the MAC (74.5%).

The Flashes turned the ball over 14 times, which led to easy transition buckets for the Bulls. Kent State also finished the game 13-for-62 (21%) from the field and 1-for-17 from three. The team also finished with just five assists.

The Flashes are now 1-10 in their last 11 meetings with Buffalo. After Wednesday’s game, the Bulls hold a commanding lead over the Mid-American Conference’s East division. They have the second-best scoring defense in the MAC (65.7 ppg), which is one spot below Kent State (65.8 ppg). Buffalo leads the MAC in opponent’s field goal percentage (37.1%).