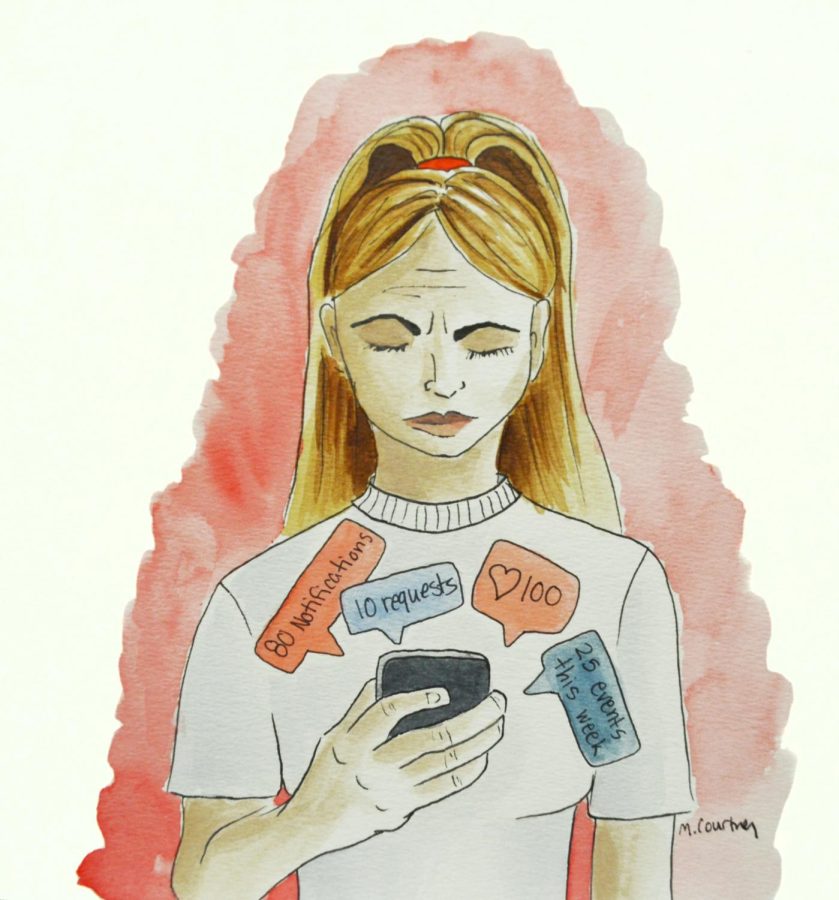 When Andrew Lepp, an associate professor in the College of Education, Health and Human Services (EHHS), walks into a classroom, he is often met by silence.

Instead of seeing a room of students talking before class, he sees a room of eyes gazing down at smartphone screens.

This has become a common scenario at universities across the U.S., as smartphones have taken on larger roles in the lives of students. Data released by the Pew Research Center in 2017 revealed 92 percent of American 18-to-29-year-olds own smartphones, the most of any age demographic.

Although smartphones are continuing to grow in popularity, excessive use could be contributing to unhappiness and anxiety among students.

Lepp, along with colleague Jacob Barkley, who is also an associate professor in the College of EHHS, has been researching the effect of smartphone use on students since 2013. His research has identified a relationship between smartphones and unhappiness.

“We found that individuals that spend more time on their cell phones have poorer relationships with their peers and their parents,” Barkley said.

This conclusion is similar to that of a study led by Jean Twenge, a psychology professor at San Diego State University, in 2017. In this study, it was discovered students who spend more time using smartphones and other electronic devices are less satisfied with their lives than students who frequently engage in face-to-face interaction.

Another issue linked to frequent smartphone use is high levels of anxiety.

The study conducted by Lepp and Barkley showed that high frequency smartphone users have higher anxiety than their peers. The study was non-experimental, meaning the results indicate a relationship between smartphone use and anxiety, not causation.

However, Barkley said it is possible students are developing anxiety because of the stresses created by smartphones.

During their study, Lepp and Barkley interviewed students about their smartphone habits. Barkley said many of these students reported feeling pressured by their smartphones, and the need to constantly respond to text messages and maintain a presence on social media.

Additionally, Barkley said smartphones can cause students to worry about “the fear of missing out.”

“Students are very concerned about what other people are doing, and they don’t want to feel left out,” Barkley said. “When they see that they missed out on something, that can cause some anxiety.”

In spite of the link between frequent smartphone use, unhappiness and anxiety, Barkley said smartphones can have positive effects on students.

“Having access to all the information in the world in your pocket is pretty powerful,” Barkley said. “The device obviously has a number of really beneficial uses, especially for college students.”

Some of the benefits, Barkley said, include the ability to connect with peers and use apps that track physical activity.

“What we find is that the majority of use of these devices is for leisure purposes. People play with their phones. And when you play with your phone, it’s probably not all that enriching,” Barkley said.

One measure people can take to improve the way they use smartphones is to be more critical of the role technology plays in their lives, Barkley said. This means making a conscious effort to limit screen time.

Similarly, Lepp said smartphones can be beneficial to students as long as they use them in moderation.

“It is only when we fail to control our smartphone use that it can lead to problems,” Lepp said.

Paige Bennett is a feature writer. Contact her at [email protected]