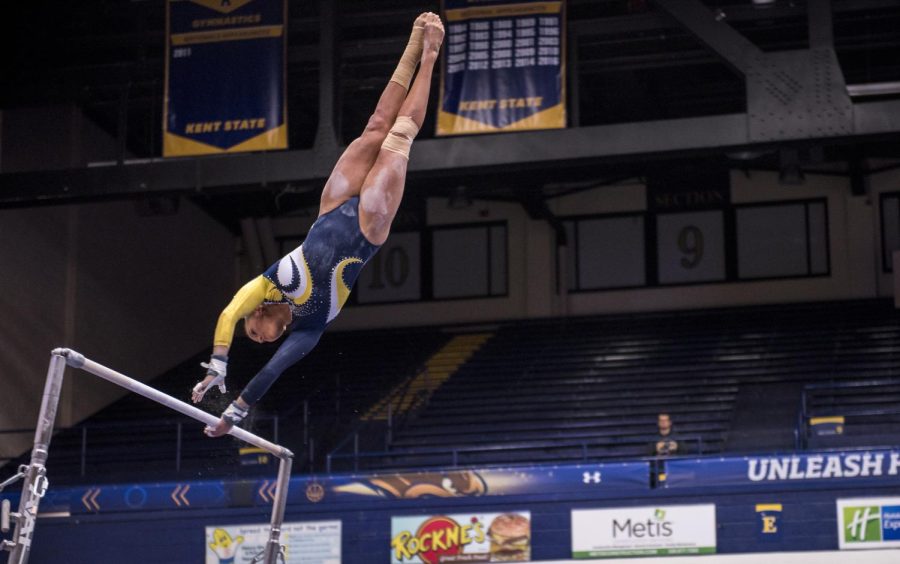 Then a junior, Rachel Stypinski participates on the uneven bars during a meet against Ball State Friday, March 10, 2017. [FILE]

The Kent State gymnastics team posted a season-high score against Central Michigan, but the Flashes fell short in a narrow competition to the Chippewas, 196.150-196.125.

“We went out there and did a great job,” Kent State coach Brice Biggin said. “We competed hard, had our best meet of the season and had our highest score of the year including both home and away meets.”

This is the team’s highest score of the season and currently the third ranked score in the Mid-American Conference. The Flashes also posted season-highs on floor (49.200) and vault (48.875). The team only fell short by one quarter of a point, but Biggin was still proud.

Biggin said that to post a season-high score, it took team effort, and every gymnast had stand out performances. Senior Rachel Stypinski took home another all-around title with a score of 39.375. Freshman Abby Fletcher and sophomore Sarah McCarty posted season-high scores on vault.

“Everyone stepped up and did their job,” Biggin said. “They showed a lot of confidence and a lot of pride in themselves.”

Biggin also said the Flashes were prepared and focused while competing at Central Michigan. He said the team yelled and screamed during practice in the previous week to help improve their focus.

“They didn’t focus on what Central (Michigan) was doing; they focused more on themselves as a team, and that is all I could ask for,” Biggin said.

The Flashes have been on the road for the past four weeks, and they finally return back home this Sunday. Biggin said the team is beyond exciting to finally compete at home again.

When preparing for the upcoming home meet, Biggin is looking to improve on the little things.

“Their confidence is looking good in meets,” Biggin said. “We just have to continue to cut out some of those little mistakes.”

Kent State’s next meet is against Eastern Michigan at 1 p.m. Saturday at the M.A.C. Center.

Libby Schrack is a sports reporter. Contact her at [email protected]