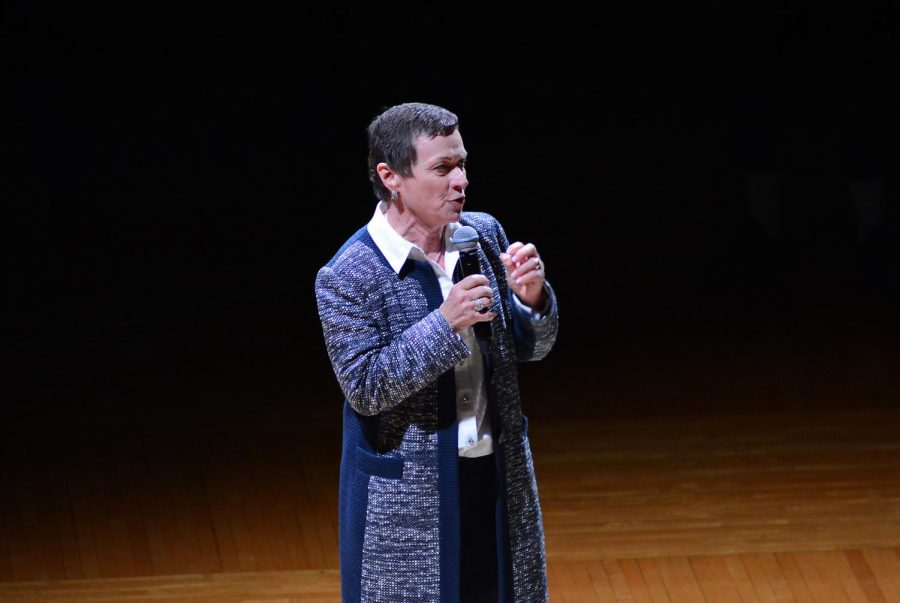 President Beverly Warren revealed new details on the developing Master Plan at a public session on campus Tuesday, highlighting the Kent State community’s input was crucial in shaping the proposal.

Over the course of 18 months, Kent State and SmithGroupJJR, an architectural, engineering and planning firm, drafted the plan based on more than 1,200 online suggestions from the community, Warren said.

“Here on the Kent campus, this has been a very inclusive process,” Warren said. “This plan could be developed in a backroom, in a president’s office. …But we had many many meetings — over 60 sessions to really engage the community at all levels. We had close to 500 individuals who attended those meetings.”

The university’s last Master Plan from 1996 “still has unrealized features,” Warren said. The current 10-year, $1.2 billion proposal is divided into three phases to ensure projects are completed on schedule.

The proposal for a pristine College of Business Administration Building is estimated to cost $72 million. Warren said Kent State officials are engaging with developers in the private sector to join in partnership with the university.

“This will be the first in the U.S. in terms of a public-private partnership, a P-3 with an academic building,” she said, which people typically see in university auxiliary buildings, like dining areas or residence halls, but not in academic buildings.

The university will host a design competition open to the public in April, where four design firms will present ideas for the building. This will be narrowed down to two firms, and Kent State officials involved in the Master Plan process hope to make a recommendation to the Board of Trustees in May, Warren said.

An exact date for the competition has not been set.

The idea for a singular gateway to front campus remains high on the priority list. Warren said now, the university lacks a “front door to Kent State” with its multiple entries.

She said the gateway plan goes beyond a physical entrance to campus, but will be a gateway for students’ futures, the faculty’s greatest aspirations and the staff’s ability to make a difference.

Another key component of the Master Plan is the innovation zone intended to replace the old School of Art building in the center of campus. Students of all disciplines will be welcome to collaborate in this “24/7 maker space,” which will provide a dining option closer to front campus.

“When students want a cup of coffee and a snack at 2 a.m., when that’s when they come alive at the best moment, there’s a place to go and be with community,” Warren said.

The go-ahead on the plan depends on the Board of Trustees’ decision in March.

Warren said the Master Plan, combined with the Strategic Roadmap to a Distinctive Kent State and efforts for fundraising, has led the university to a defining moment where “opportunity is now.”

“We’re able to harness our passions for where we want to take this university, and we have a plan that’s purposeful. … One thing we’ve been missing is how do we put purpose in a campaign so that people say, ‘I want to give to that,’ she said.

“And when we do that, we’re able to achieve the dream of more students coming to Kent State, following their dreams and aspirations. And when we do it all together, there’s just no telling how far we’ll go.”