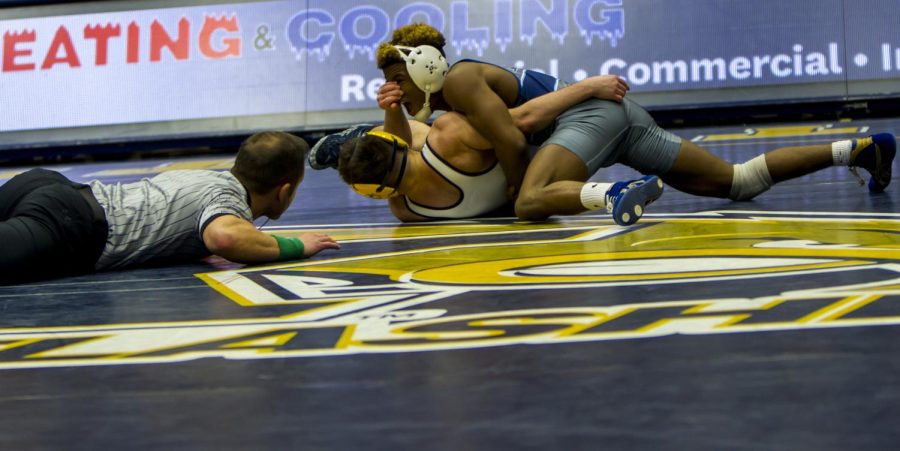 Freshman Jake Ferri grapples with an Old Dominion wrestler Wednesday, Feb. 9 at the M.A.C. Center. The Monarchs won the match, 19-14.

Tutolo was the first wrestler with a victory, wrestling up to the end of the third period with a 1-1 tie, but finishing his match with a takedown and a win.

Bast started his match getting points on the board with a reversal, ultimately winning with a major decision and 14-5 score.

“I knew where I was going with this duel and where the team’s score was and just went out with what my coach said: Score some points and try to get the major decision,” Bast said. “I wasn’t wrestling for a major decision. I was just worried about scoring the next point. I felt good wrestling each point and wrestling all seven minutes. I’m happy with the pace I put on the kid.”

Conel finished all four periods with takedowns, winning with a 16-7 major decision.

“My strategy for the first period was to wear him down,” Suglio said. “Most of the match ended up being on our feet, and I could tell his focus was to get a hold of my head.”

Suglio entered the third period tied and ended the match with a takedown to score a 6-4 decision.

“I put myself in a position to win just by pushing the wrestler’s pace” Suglio said. “I was pretty confident that I could get the last takedown.”

Coach Jim Andrassy was impressed by his team’s toughness, even if they didn’t achieve the desired result.

“The team put in a good effort today,” Andrassy said. “They came in prepared and fought hard.”

In order to win the next match, Andrassy said the boys need to bring “effort and even a little luck” to the tournament.

Kayla Proctor is a sports reporter. Contact her at [email protected]