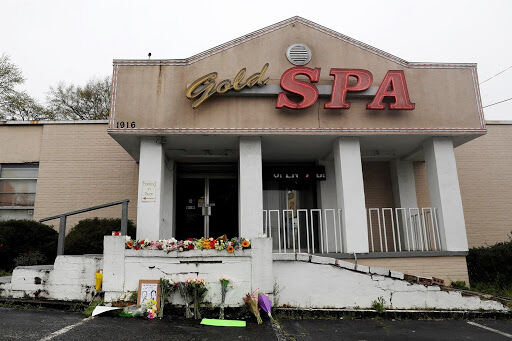 Memorial outside of Gold Spa, one of the establishments that was attacked in Atlanta.

On March 16, eight people died following a mass shooting in three massage parlors in Atlanta, six of whom were identified as Asian women. This shooting was one of thousands of hate crimes committed against Asian Americans since March 2020.

“It’s horrible what happened,” said Maxwell, a Kent State junior who declined to give their last name for sake of privacy. “I feel awful for the families who were affected.”

Following the shooting, #StopAsianHate began trending on social media, calling for the end of race discrimination and violence toward the Asian American and Pacific Islander communities in America.

Many deemed this as another instance of hate crimes against AAPI.

In 2021, before the Atlanta shooting, research conducted by the forum Stop AAPI Hate reported almost 3,800 incidents of hate crimes against the AAPI community. Its research spanned throughout the pandemic.

However, this research raises the question as to why attacks on Asian lives have been so prevalent in America.

“I feel like a lot of anti-Asian sentiment comes from ramifications from the coronavirus,” Maxwell said. “Trump made it very clear that China is the enemy.”

As ABC News reported from a study published in the American Journal of Public Health, researchers found that former U.S. President Donald Trump’s use of “ChineseVirus” on his Twitter coincided with the rise of anti-Asian hate crimes.

However, this is not the first instance when the AAPI community was targeted based on racist intent.

In 1871 in Los Angeles, a mob of around 500 people attacked and robbed Asians living in Old Chinatown following tensions in surrounding neighborhoods.

Now dubbed the “Chinese Massacre of 1871,” it resulted in the deaths of 19 Chinese immigrants.

Only eight of the rioters were convicted on manslaughter charges; however, the charges were overturned based on a legal technicality.

In 1982, Vincent Chin was killed in Michigan by two white men. They alleged to have used racial slurs as they attacked Chin. The men blamed Chin for the success of Japan’s auto industry for their unemployment.

Chin was of Chinese descent.

“Violence takes many shapes and forms, and some are enforced at the institutional level,” said Yuko Kurahashi, a professor for the School of Theatre and Dance. “We need to pay attention to various conditions of violence including intimidation, bullying and micro-aggression to change ourselves and society.”

The Chinese Student Association is an organization that actively pushes against anti-Asian sentiment and violence and highlights Asian culture.

“We are focusing our time and efforts on building more cultural events and activities,” said Haoran Sun, the vice president of the CSA.

Annually, the organization hosts its Spring Festival Gala at the beginning of the spring semester. The event celebrates Chinese culture. The CSA also invites local community members to highlight specific aspects of the culture including music and fashion.

“We provide platforms for local Chinese and other Asian communities to introduce students to new or possibly related cultures,” Sun said.

The overall goal for the CSA mission is to build the Asian community at Kent State while still providing genuine connections through events like the Spring Festival Gala.

Kent State’s Asian, Asian American, and Pacific Islander Faculty and Staff Alliance will organize its “Stand Together Against Hate” rally on Wednesday, April 7.

The rally will commemorate victims in the Asian community targeted by violence in America. It will begin at 5:30 pm at the School of Music Field on the corner of Route 59 and Horning Road and will end at the Kent State rock.