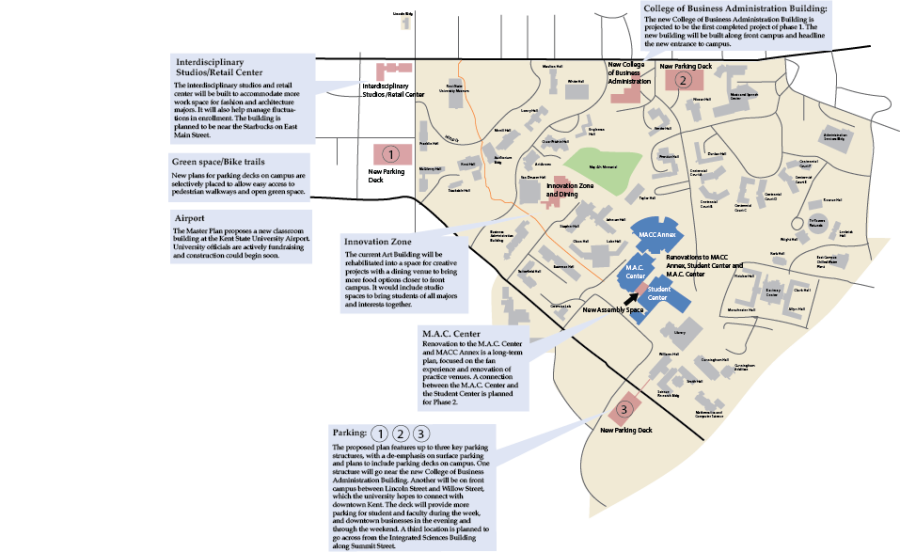 Once completed, construction for a singular gateway, along with remaining projects to extend the “iconic front campus” along East Main Street, will likely come to fruition.

The $1.2 billion, decade-long plan for a revamped university — in the works for more than a year — awaits approval from the Board of Trustees in March.

Plans for the College of Business Administration Building, a fundamental project in the Master Plan’s first phase, are the “largest and furthest along,” said Michael Bruder, the executive director of Facilities, Planning and Operation.

“The whole front campus area, which we’re viewing from Moulton Hall up to the Center for Performing Arts, … is what we’re looking to improve and carry the character of front campus all the way down (East) Main Street,” Bruder said. “The College of Business is really the anchor project to that.”

Completion of the Business Administration Building is expected for Fall 2020.

According to the Master Plan draft the Board of Trustees reviewed at its last meeting Dec. 13, construction for the highly anticipated “gateway to a distinctive Kent State” will follow, which calls for the destruction of Terrace Hall, the Williamson House and the Carriage House.

“We plan to close that (Terrace Drive) and then reconnect it over to Midway Drive to create a singular point of entry to campus,” Bruder said.

The university is organizing a competition, coming in late March or early April, that will feature campus-wide presentations of design entries for the Business Administration Building.

Phase 1 is projected to cost $220.8 million, with the bulk of funds flowing from public-private partnerships and philanthropy. The Master Plan outlines possible funds from two other categories for Phase 1: Kent State, responsible for 29 percent, and state capital, which could cover 13 percent.

SmithGroupJJR, an architectural, engineering and planning firm and longtime partner of the university, developed the Master Plan based on in-person and online input from the Kent community.

“The process was very much so inclusive; it was engaged, and it was driven by students, faculty, staff and community members,” said Doug Kozma, the co-leader of SmithGroupJJR. “Something that was really important to our organization and to the president (Beverly Warren) and her team was engagement.”

Kent State held Master Plan meetings on campus and publicly downtown with city officials, where community members were welcome to voice their sentiments.

Proposals in the Master Plan are not set in stone, but the balance between large-scale, pricier “transformational projects” like the Business Administration Building and less expensive “enabling projects” make the visions realistic.

Kozma said many of the enabling projects for Phase 1 — moving programs from demolished buildings, interdisciplinary studios, cultivating sidewalks and bike trails and a potential parking deck — will be done in parallel with transformational projects.

Individual projects will require approval by the Board of Trustees.

James Bowling, the superintendent of engineering for the city of Kent, said the Master Plan stands as a great tool to direct the university in the next 10 years, but construction to front campus would have implications for students and Kent residents.

“The rearranging of the entrances of the Kent State campus would affect traffic on East Main Street, potentially positively or negatively, and that would have an impact to the city and the traveling public,” Bowling said.

Kozma said the transformation from “a vehicular environment dominated by the automobile and the parked car” to an area focused on trees and “meandering, trademark-characteristic Kent State sidewalks” is the vision for front campus as people move along East Main Street.

One of the primary drivers behind this idea is Warren’s commitment to cultivating a healthy campus, Bruder said.

“The emphasis on those improved walking and biking trails is to provide a healthy space, but also to make the campus a more enjoyable place to be,” Bruder said. “Our favorite parts of campus are not the areas that have big surface parking lots.”

Though exact pathways aren’t plotted, the university has allocated funds and has a conceptual vision for these enabling projects, which will span not only across front campus, but the university as a whole.

Phase 1 of the Master Plan lists a “Main Street multi-use parking structure” as one of the enabling projects.

A parking deck is predicted to be built on front campus, near the new Business Administration Building. Another falls into the “downtown connector” district, where the interdisciplinary studios and retail space will be housed; this parking deck will be between Lincoln Street and Willow Street.

Bruder said the idea of the downtown connector parking deck is to aid the northwest part of campus where parking space is lacking. He added this would benefit businesses downtown.

“It would be a great opportunity to partner with the city because we need parking Monday through Thursday during the day for classes, and the downtown restaurants could use it evenings and weekends,” Bruder said.

Bowling agreed, and he said based off of what he’s seen in proposals for the Master Plan, the idea is to consolidate campus and make it denser, moving the population center of campus closer to downtown.

“Just that density and number of people drives more businesses, customers and sense of place to the west edge of campus and downtown — that allows the synergy of the downtown and campus to really be utilized to help drive both the missions and goals of the city, as well as the university,” Bowling said.

Beyond bricks and mortar

On first glance, the Master Plan appears to address an enhanced campus from an architectural perspective.

“The way a campus looks and feels does influence a prospective student’s decision to attend a place,” Bruder said. “That’s why we try to make it as attractive as possible.”

However, one of the goals outlined in the Master Plan draft is “cutting-edge teaching and learning environments.”

Elwin Robison, a professor in the architecture program, said he’s noticed a lack of large-scale lecture classrooms in his 33 years at Kent State, which he hopes Master Plan organizers will implement.

“As unfortunate as they are sometimes, the reality is if we’re going to be a state school, we’re going to have to have large classes for the 100 and 200-level classes,” he said. “Hopefully they will be large rooms that function well … with good acoustics so that you can actually teach effectively.”

Based on his knowledge of the Master Plan proposals so far, he said he believes the physical changes to campus will support learning spaces.

“Along with the interest with the campus (Master) Plan, there’s a real change in the university right now,” he said. “We are bringing faculty on board now who have a much wider vision than existed 30 years ago. We were a little bit of an insular community, and I think we’re much more part of a worldwide scholarly community now. I think some of the physical changes of the campus are paralleling.”

“Part of this process was actually a very detailed and technical analysis of our classroom utilization and teaching styles,” Bruder said. “The research component is another thing Dr. that Warren has stressed. … We are looking at a dedicated research facility, and as we want to attract top-notch scientists and faculty, we need to have the facilities to support that.”