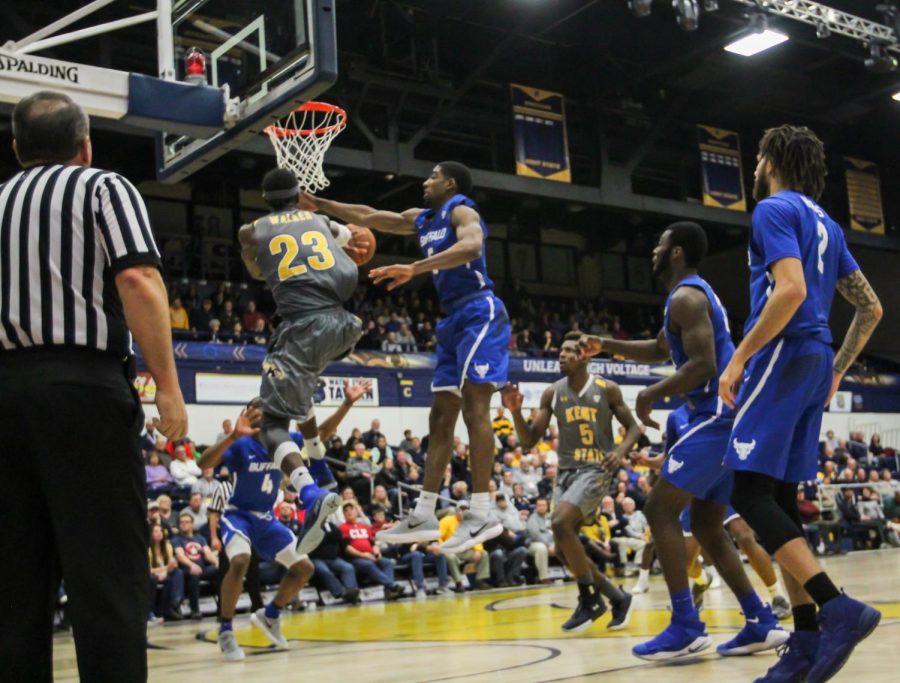 All of these themes from Kent State’s current two-week, four-game losing streak culminated in another disappointing loss Tuesday, this time an 84-72 defeat at the hands of Mid-American Conference leaders Buffalo (19-7, 11-2 MAC).

The Flashes (12-14, 6-7) didn’t shoot the ball well early, finishing the first half at just 37.9 percent from the field, but they were right with the Bulls for most of the period. At the final media timeout of the first half, Kent State only trailed by six points.

When the game resumed, however, the Flashes saw its hopes diminish. Buffalo closed the first half with a 16-4 run to open up an 18-point halftime advantage. Kent State guard Kevin Zabo nailed a three-pointer at the halftime buzzer, but before that, the Flashes had gone over four minutes without scoring.

Buffalo’s Nick Perkins, who was ejected in the final moments the last time these two teams played, scored 12 points and pulled down five rebounds in the half to lead the Bulls to a 45-27 lead at the break.

The Flashes had turned the ball over nine times, mostly overthrowing lobbed entry passes intended for Adonis De La Rosa. Buffalo had a 21-12 rebounding advantage, and the Bulls shared the ball, picking up 11 assists to Kent State’s four.

Kent State entered the second half on fire offensively, as junior point guard Jalen Avery made four three-pointers in the first five minutes and 30 seconds of the period. Buffalo guard Jeremy Harris went shot-for-shot with Avery, scoring Buffalo’s first nine points of the second half.

The Flashes traded baskets with Buffalo for much of the half, cutting the lead down to as few as 10 points at the under-4-minute media timeout.

Despite winning the second half by six points, the Flashes couldn’t pull out of the grave they dug themselves in the first half, and Buffalo picked up another win, keeping pace with Toledo atop the MAC.

Even though the end result remained a loss, the second half Tuesday didn’t look like the other defeats in the Flashes’ four-game skid. The team shot 40.5 percent from the field, assisted 10 baskets and caused seven Buffalo turnovers compared to just three of their own.

Kent State coach Rob Senderoff focused on the positives of the second half rather than dwelling on the lackluster showing the Flashes gave in the first.

Zabo led the Flashes with 17 points off the bench, his most since dropping in 22 at Central Michigan on Jan. 27. Avery scored 16 points, 14 of which came in the second half, and Jaylin Walker added 15 points on 4-for-17 shooting. De La Rosa scored 11 points and pulled down nine rebounds.

Harris led the Bulls with 24 points, 17 of which came in the second half, on 9-for-15 shooting. Wes Clark added 19 points, his fifth straight game in double-digits, and Perkins added 15 points and 10 rebounds off the bench to secure his third double-double of the season.

Kent State returns to action to take on Akron (11-14, 4-9) in the Wagon Wheel Challenge at 2 p.m. Saturday at the M.A.C. Center. Kent State won the last meeting, 70-65, in the MAC Championship game at Quicken Loans Arena, sending the Flashes to the NCAA Tournament.