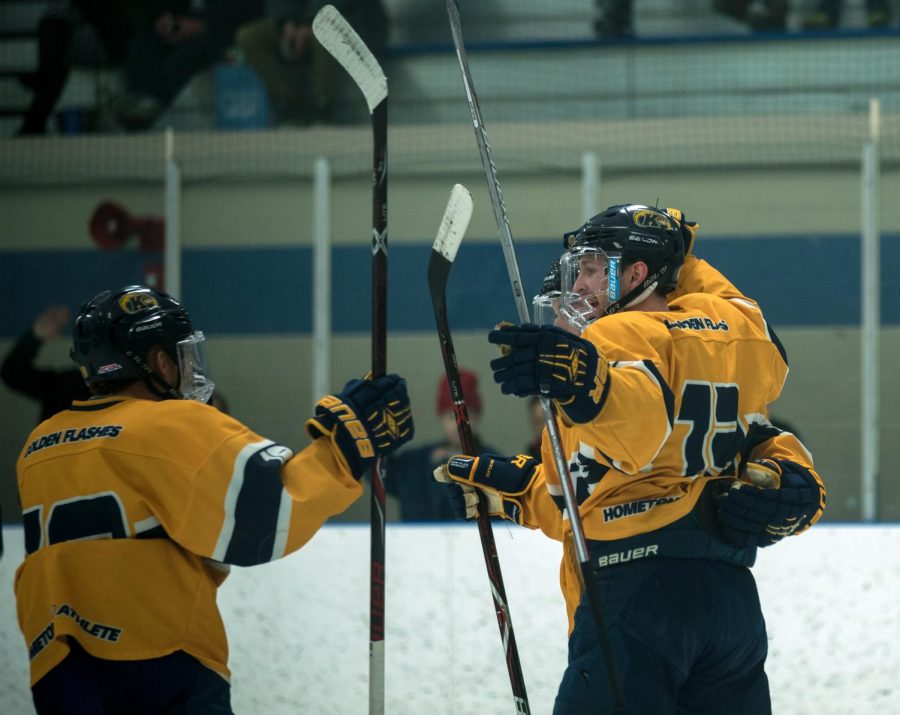 Kent State hockey players celebrate one of the Flashes' goals in a 6-2 win over Mercyhurst Saturday, Feb. 10, 2018.

Friday night was all Kent State, as five different players were able to get onto the scoresheet.

The Flashes scored their first goal five minutes and 30 seconds into the first period, thanks to forward Rob Ferrari.

In the second, defenseman Jake Parry was able to score an unassisted goal and put the team up 2-0.

Forward John Buttitta was able to tack on a goal early in the third period to put the game seemingly out of reach.

Mercyhurst was unable to put the puck past junior goaltender Alex Okicki until 5:51 left in the game.

Forwards Jake Hainline and Xavier Sudlow each tacked on an empty-net goal for extra measure to make the final score 5-1.

Overall, Okicki had one of his best performances in net for the Flashes, saving 36 of the 37 shots Mercyhurst put on net.

Buttitta, one of the team’s assistant captains, was happy with how the team played.

“It was a great effort by the entire team,” Buttitta said. “Everyone executed their part well and was where they needed to be throughout the game.”

It was Senior Night for the team, and the game will likely be the seniors’ last at the Kent State Ice Arena. Therefore, coach Jim Underwood decided to switch things up by putting forward Chance Taylor in as a defenseman for the first shift.

“Chance has played defense before, so we were confident in making that decision,” Underwood explained. “Even if I had five senior forwards, I would’ve started two of them on defense because it is a special moment for them.”

However, in the first period, Kent State looked sluggish and was unable to get anything going. This allowed Mercyhurst to take a 1-0 lead midway through the period.

It wasn’t until midway through the second period that Taylor was able to bang in a rebound off a slapshot from the point by defenseman Joe Sullivan to tie the game.

That goal seemed to breathe life into the Flashes.

Kent State went on to score four unanswered goals, thanks to forwards Rob Ferrari, Jake Hainline, Sean Moore and defenseman Ryan Wonfor. Those goals made the score 5-1 in favor of the Flashes.

The game would end 6-2 to Kent State, adding another controlling victory to its case for a national tournament slot.

Senior goaltender Sky Buller, who saved 20 out of 22 shots he faced on Saturday, was happy with the win and thankful for his time at Kent State.

“It’s been a great four years for me at Kent State, and I’m thankful to everyone who’s supported me along the way,” Buller said. “I always have felt we have one of the best and most supportive crowds, and it meant a lot to me to have that.”

Underwood was hopeful when it comes to the remainder of the season.

“This was a great win for the guys, especially the seniors, and it’ll be a confidence booster going into next weekend against Davenport,” Underwood said.

As far as the national tournament, Underwood hopes these wins will help the team move up in the rankings.

“We had two victories this weekend, both by large margins, which will hopefully help us move up a spot or two in the national rankings,” Underwood said. “Davenport is ranked 15th as of right now, so if we have another strong weekend, we will have a strong case for one of those 17 remaining spots in the tournament.”

The Flashes return to the ice against Davenport University (16-12) at 8 p.m. Friday in Grand Rapids, Michigan.