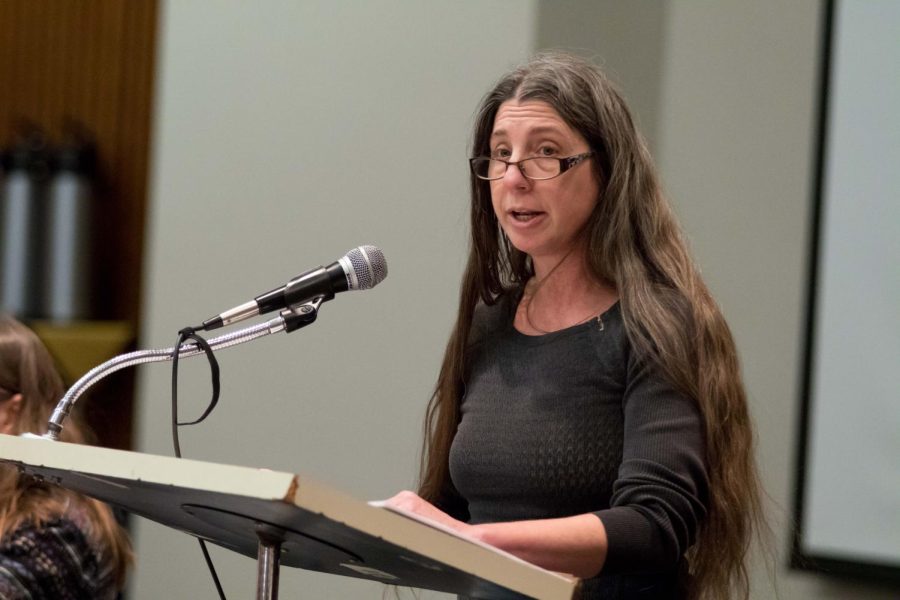 Faculty Senate chair Deb Smith speaks during the first meeting of the semester on Monday, Feb. 12, 2018.

Faculty Senate went head to head with the administration on the upcoming Fall 2018 break during the first meeting of the semester Monday.

Faculty Senate Chair Deb Smith opened the meeting expressing her “deep disappointment” for the administration’s decision to implement a fall break at its last December meeting without further input from senators.

“This came as a shock to me not because I oppose the idea of a fall break, but because (Faculty) Senate had not been given an opportunity to consider and vote on a revised proposal,” Smith said. “Moreover, it was revealed that the decision would have unintended consequences for either spring semester or summer sessions — consequences that very likely would have had an impact on Senate’s thinking on whether or not to endorse a fall break.”

The Fall 2018 semester is expected to begin on a Thursday — two weekdays before classes have normally convened.

Melody Tankersley, the senior associate provost and dean of Graduate Studies, presented two options to make room for the fall break: shorten the spring semester or shorten the summer term.

Spring semester would be cut by three days to allow final exams to begin earlier. Falling between the end of classes, a Tuesday, and the start of exams, a Thursday, would be a reading day on Wednesday. This proposal would not alter the length of summer, but it would move the summer term forward four days earlier, with classes beginning on a Thursday as opposed to Monday.

The summer term would undergo a two-day slash. It would conclude three days earlier on a Wednesday rather than Saturday. This option would not affect fall and spring breaks.

After opening the floor to commentary from senators who voiced a variety of concerns, some of them asking why the options presented were their only choices, Tankersley responded and said these proposals were the “least drastic.”

Smith said the reason for shared governance and very reason Faculty Senate exists is “so that we can collaborate for positive change at the university.”

“Instead, in forgetting that, the results is hard feelings, missed opportunities and a decision that ultimately creates more problems than it solves,” Smith said.

Several senators advised the administration to consider eliminating intersession and spreading that time out more effectively as not to interfere with the spring semester and summer term. Faculty Senate moved to table the item for later discussion.

Tankersley encouraged faculty and chairs to reach out to her with their worries and recommendations for improvement, which she will compile for the next time Faculty Senate assembles. In response to Faculty Senate’s dissatisfaction, she said she, too, feels disappointed she didn’t have enough opportunity to engage with faculty.

“I know that engaging as many as possible in all decisions is important, especially engaging faculty in decisions that directly affect the academic delivery of our programs is critical,” Tankersley said.

The meeting also addressed a revision to a university policy regarding consensual relationships where a difference in power exists between two members.

“This is not prohibiting such relationships, but rather offering a principle view of how this show be regarded and a series of instructions about what to do under the circumstances in which a consensual relationship has arisen,” Roxburgh said.

The policy is designed to protect all parties involved, not simply the person with less power.

After much discussion from senators sharing their opinions and urging further language revisions in the policy, Faculty Senate member George Garrison brought up a recommendation that sparked attention in the Governance Chambers: The policy should be university-wide.

“It doesn’t make sense for us to design a policy like this simply for the faculty,” Garrison said. “If we’re trying to prevent things that are bad in some ways, then the university has an interest in ensuring that it applies to all employees here. It’s like having a sexual or racial harassment policy only applying to the faculty.”

Discussions involving revisions to the policy will continue in upcoming Faculty Senate meetings this semester.

Faculty Senate passed a motion regarding a recommendation to change Student Surveys of Instruction, or SSIs, to an electronic, face-to-face format.

Jennifer Marcinkiewicz, the director of the Center for Teaching and Learning and chair of the Student Survey of Instruction Review Committee, presented the recommendation. She praised the committee’s pilot from last spring, which generated a high rate of returned SSIs and increased quality of comments from students.

The four questions outlined in the pilot should continue to be used.KentWired explains the four questions here.Reports that are returned to faculty and unit administrators should not rely on norming group means.Evaluations in face-to-face courses should be conducted using time set aside during class.Instructors teaching online courses should include all means possible to receive returned course evaluations from students, like Blackboard announcements and sending emails.

Administrative units, such as departments, schools and campuses, should add no more than eight additional items to the four existing questions on the SSIs.

For individual faculty members, no more than three additional questions may be added to the four existing questions on the SSIs.

Faculty Senate passed a variety of other less time-consuming motions, including the establishment of new majors and revisions of formal major names that already exist.

For the university’s main campus, a new Computer Engineering Technology major and Neuroscience major will be offered. For Kent, Stark and Tuscarawas campuses, the Faculty Senate approved a motion to create a Modeling, Animation and Game Creation major.

The next Faculty Senate meeting is scheduled for March 12.