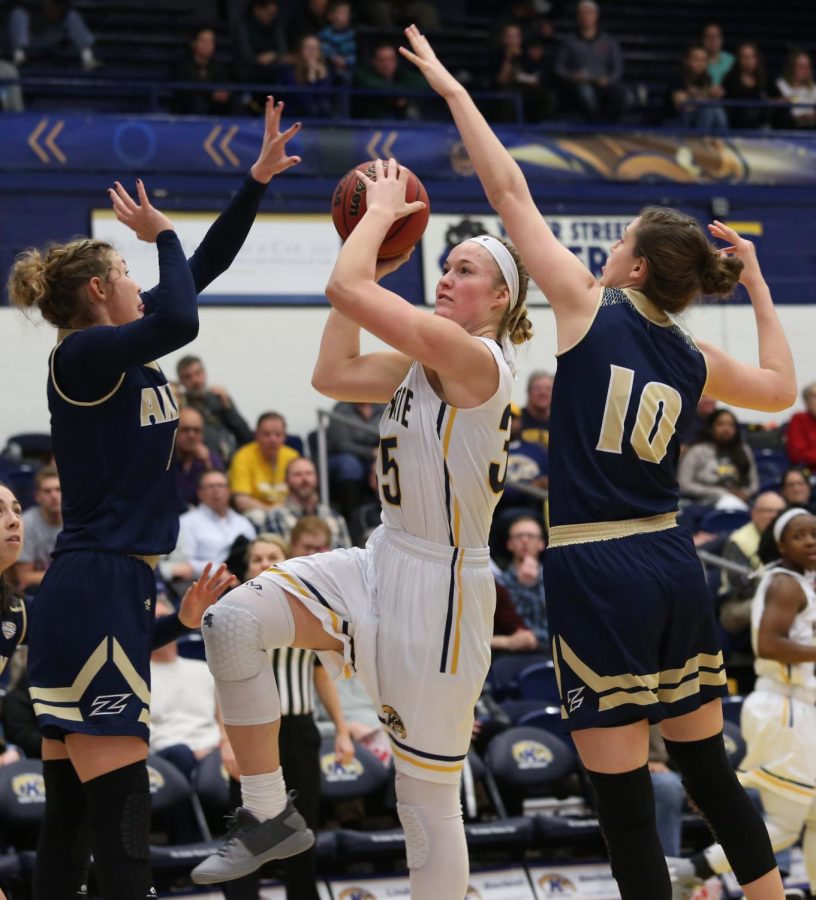 Senior forward Jordan Korinek drives to the basket for two of her game-high 16 points during Kent State's 60-55 win over Akron Saturday at the M.A.C. Center.

Kent State’s defense stifled Akron all game, and the Flashes offense did just enough down the stretch to survive a furious Zips comeback for a Wagon Wheel Challenge win, 60-55.

The Zips came alive in the fourth quarter when junior forward Fredniqua Walker scored a career-high of eight points.

With around two minutes left, Alyssa Clay hit her second three-pointer of the game from the right corner to cut the Flashes lead to 55-53. Kent State struggled to take care of the basketball for much of the fourth quarter, turning the ball over seven times in the final period.

Despite the team’s sloppy execution down the stretch, Kent State forward McKenna Stephens, a graduate forward celebrating her second Senior Day festivities, knew the Flashes would come out on top.

Senior forward Jordan Korinek noted the team’s mental strength as one of the reasons for the close win.

The Flashes stayed just composed enough to hold on for the five-point win after junior guard Alexa Golden sealed the win with free throws in the final seconds.

The win snaps a five-game losing streak for Kent State. The Flashes held Akron to 31.7 percent shooting on the day, including 19 percent from beyond the arc, causing 13 Zips turnovers and holding a 44-34 rebounding advantage.

“I just thought we played hard,” Kent State coach Todd Starkey said of his team’s defensive performance. “I thought we listened to our gameplan. We did a good job of talking. It wasn’t like we had this elaborate gameplan. We just had to play better.”

No Akron players scored in double-digits, but Haliegh Reinoehl and Megan Sefcik led the Zips with nine points each.

Korinek (16 points and 10 rebounds) and Stephens (14 points and 11 rebounds) each recorded double-doubles, something they joked was planned because it was Senior Day, and, in all likelihood, their last game against crosstown rivals Akron.

“It feels surreal; it feels like it went like that,” Korinek said, snapping her fingers for effect. “It’s already the end of our careers. It’s been a journey with a lot of ups and downs, but here we are.”