REVIEW: Pyeongchang closes out its exciting Winter Olympics with a ceremonial celebration 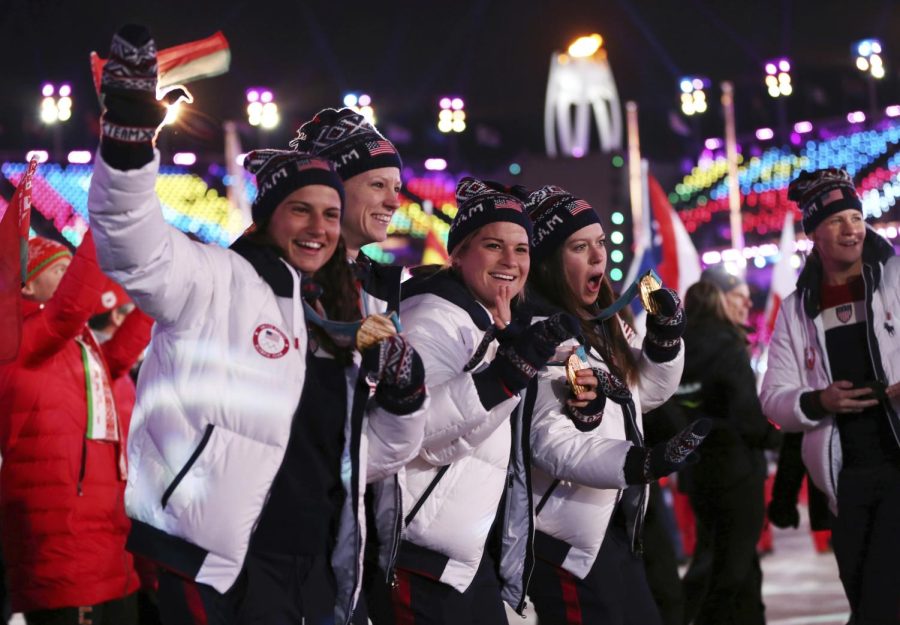 United States athletes walk in the stadium during the closing ceremony of the 2018 Winter Olympics in Pyeongchang, South Korea, Sunday, Feb. 25, 2018.

To inspire a new generation of Olympic athletes and celebrate PyeongChang’s heritage, the 2018 Winter Olympic games officially came to a close.

We saw the best athletes in the world take center stage during these games.

Overall, the United States took home 23 total medals: Nine gold, eight silver and six bronze highlighted by a few standout performances. Additionally, they finished fourth in the medal count behind Norway’s 39, Germany’s 31 and 29 from our neighbors in Canada.

Shaun White returned to golden form after a long and hard road to PyeongChang, South Korea, in the men’s halfpipe while the U.S. men’s curling team brought home their first ever gold medal.

The women’s hockey team took gold for the first time in 20 years after a pair of iconic and heroic plays in their shootout victory over rival Canada.

Skiers Mikaela Shiffrin and Lindsey Vonn brought the drama to the slopes with Shiffrin earning gold in the giant slalom and silver in the combined event. Vonn took home bronze in the downhill event to likely close her Olympic career.

Capping things off with the same warmth and hospitality that they hosted with, the closing ceremony brought the games to a pleasant conclusion.

Choreographed synchronized skiing that eventually formed the five Olympic circles opened the ceremony as they completed the dance to bring up a pure white floor from the original greenish-blue one.

After the introductions to a packed stadium of more than 35,000 that night, local Korean musician Yang Tae-Hwan took things to another level with a lengthy guitar solo.

Through the stunning visual representations that conveyed a theme of hope and solidarity, it was time for the Olympians to join the party.

Following the tradition of having an athlete from each country carry in their nation’s flag, Jessie Diggins represented the United States among the first to enter. She brought home the U.S.’s first gold medal in the women’s freestyle team sprint for cross country skiing and the first for U.S. cross country skiing in over four decades.

300 starlight drones took to the sky to form the shape of Soohorang, the Pyeongchang mascot. Keeping with the predecessor’s touching addition, the next segment was used for a moving remembrance of those former athletes who have passed away.

It used dandelions to represent a look forward and followed a turtle, which are often figures associated with a long life.Then they passed through a tunnel from life to a peaceful afterlife. It highly showcased Korean technology with numbers such as their “Line of Time” dance on the ever-changing visual floor.

The crowd sang, “I Am the Best,” along with K-Pop with sensation CL.

Chen Jining, the mayor of Beijing, received the flag for the next winter Olympics in 2022. Beijing also previously hosted the summer games in 2008.

To close the ceremony out, Beijing featured pandas symbolizing good fortune and illustrating imagery of the Great Wall and their Bird’s Nest Stadium as snowflakes extinguished the game’s flame.

Now we look to the XXIV Winter Olympic Games four years from now after a most thrilling couple of weeks spent in an excitingly chilly Pyeongchang.