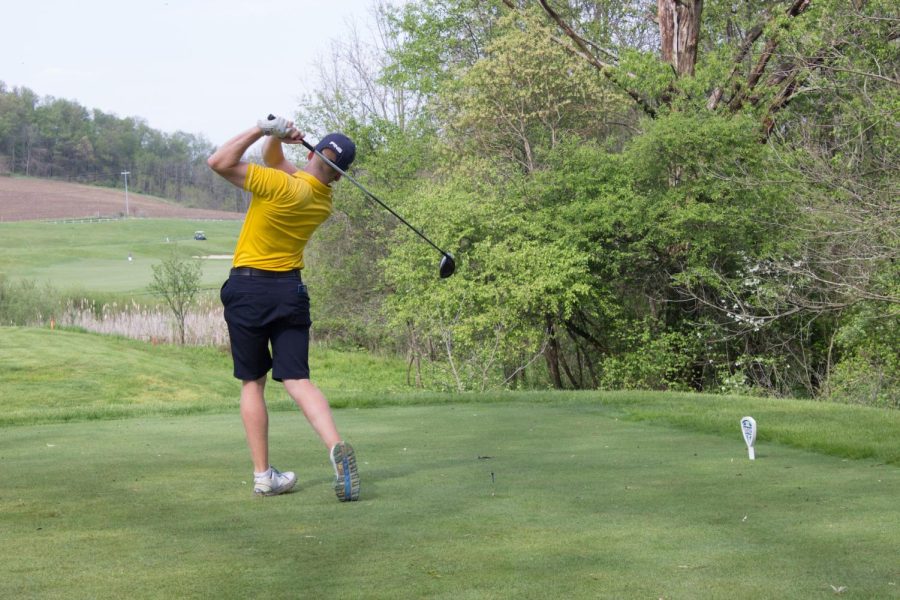 Then a sophomore, Kent State's Gisli Sveinbergsson tees off on the 16th hole at the Mid-American Conference championship in Nashport, OH. The Flashes won the conference, while Sveinbergsson won golfer of the year. [FILE]

After finishing the fall season ranked No. 22, the Kent State’s men’s golf team enters the spring ranked No. 28 in the country, according to NCAA Division I sports.

Coach Herb Page said the program has a “tradition of excellence.”

“Our goals right now are figuring out our weaknesses and turning them into strengths,” Page said.

Right now, the team has four of its five players determined for its opening tournament. Page said the fifth spot is “very competitive,” and they are still finding someone to fill it. Each player has something to work on, Page said.

The Flashes look to pick up where they left off last season and continue their success. Page said the team doesn’t care about rankings, but about winning the conference championship, moving on to the NCAA regionals and ultimately the NCAA championship.

“(The NCAA championship) is not an unrealistic goal,” Page said.

“These are the teams to beat at the end of the year,” Page said.

Ian Holt and Chase Johnson are the top scorers on the team, Page said. Holt and Johnson are two of the three captains for the team; the third is Spencer Dobbs. Holt is an all-American athlete, and Johnson was an All-Mid-American Conference first-team honoree his junior year. Holt is working on his putting stroke, and Johnson is changing the technique in his swing.

Page is looking to get the team’s confidence level up and guide them to success. The Flashes started to prepare for the season a month ago where they worked on their adaptability to weather conditions.

“There are champions here,” Page said. He added that it’s exciting to see “how far these young men can go.”

While the team is valuing its present success, it is also recruiting for the future.

Back in November, the Flashes signed Julien Paltrinieri. Paltrinieri, of Milan, Italy, won the Italian’s National Boy’s Championship, along with finishing 19th in the Toyota Junior World Cup. Paltrinieri will begin playing in the Fall 2018 season, alongside Canadian Johnny Travale. Page said the two recruits “wouldn’t be coming here if they weren’t good.”

Kent State’s men’s golf team kicks off the season Feb. 26 in the Louisiana Classics at Oakbourne Country Club in Lafayette, Louisiana. The University of Louisiana-Lafayette will host the Flashes alongside other top-20 universities in the opening tournament.