Twelve miles but a world apart: Kent vs. Akron 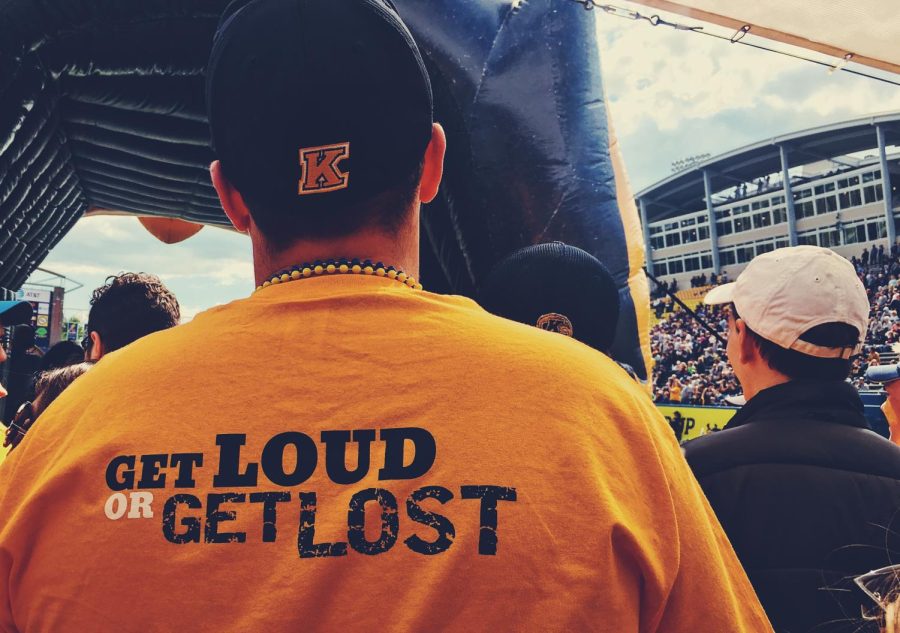 On Saturday, Feb. 17 at 2:00 p.m. the Kent State men’s basketball team will again face off against the University of Akron Zips.

The game, which will be held in the M.A.C. Center, is one of the 14 sports (with each victory being worth .5 or one point) that contribute to the The Crystal Clinic Wagon Wheel Challenge during this academic year.

Beyond the field, court and track the Kent vs. Akron rivalry is a longstanding tournament encompassing students and sports fans alike.

“The Kent vs. Akron basketball games always have the best atmosphere of any game ever,” Kyle Cate, a junior accounting major said. Cate has attended over 100 Kent State basketball games with his father since 2008.

“We don’t hate Akron, but it is always really exciting when we win and sad when we lose,” Cate said. “if I went to Akron, my family probably would have made jokes towards me.”

While sports are the heart of the rivalry, Cate said that both universities also compete to enroll local students.

“Just about everybody around here is somehow connected to one of these universities,” said Michael Osborn, a senior international business and political science major at Akron. Osborn is also the president of the Akron Rowdies, the school’s unofficial cheering section.

“When the two play each other whether there’s high stakes like the MAC championship on the line, or low stakes, someone in most households in northeast Ohio has some bragging rights on the line,” Osborn said.

There is no doubt that the rivalry is a personal one, but in many ways it actually benefits the attendance rate at many sporting events such as football and basketball.

“The Akron-Kent game at Kent is always super packed, there is not a seat open,” said Erin Davis, a junior mathematics major and the director of marketing of the MACC Maniacs, Kent’s official cheering section.

“Every year I have been here and we played Kent we have filled our arena,” Osborn said. “Students have to get their tickets two or three games in advance.”

Osborn said that even if athletics were not a factor there would still be a rivalry between the two schools.

“There are two different student cultures at the University of Akron, and Kent State,” Osborn said. “Akron focuses more on the S.T.E.M kind of majors, where Kent is the classic liberal arts.”

Despite the strengths and weaknesses of each university, many students agree that they would not in any way choose to attend the other school.

“I would never want to go there,” Cate said. “Only stupid people go to Akron.”

Madeline Scalzi is the student life and education reporter. Contact her [email protected]