An art of war: the Women’s March 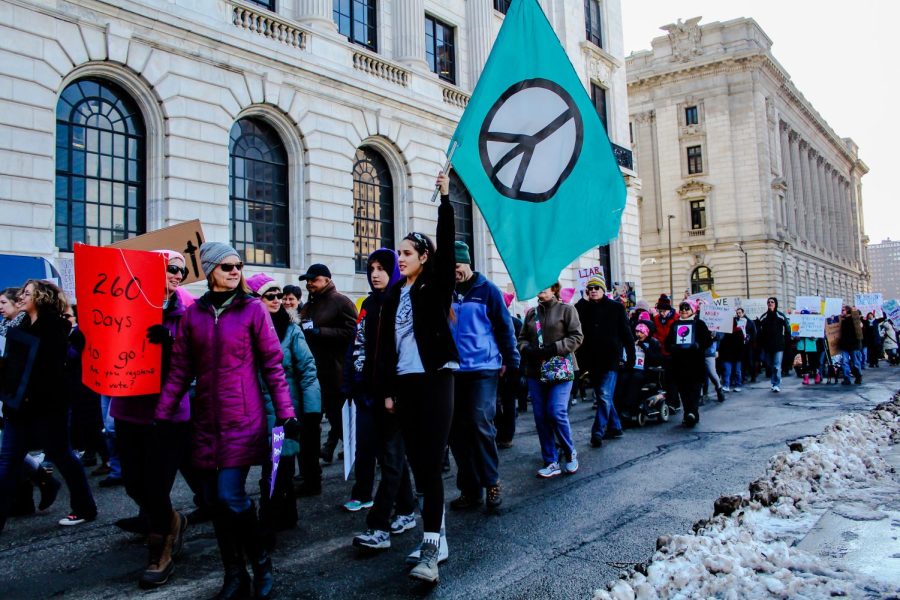 The crowd marches through the streets of Cleveland as they lift flags and signs during the Women's March Jan. 20, 2018.

Women and allies across the nation armed themselves with posters, witty slogans and “pussy hats” Jan. 20 for the second annual Women’s March.

Though there is no way of obtaining the exact number of people who marched in 2018, major cities like Chicago, New York and Cleveland are estimating 300,000, 200,000 and 7,000 marchers, respectively. All together, an article by Fortune estimated at least a million people took to the streets this year to protest a broad amount of equality issues they believe plague the United States.

“I’m here to promote peace,” said Vietnam War veteran Lou Pumphrey. “I’m trying to show not all veterans, not all Americans, are blood-thirsty killers. (War) is like trying to put out fire with gasoline. It just makes matters worse.”

Citizens like Pumphrey joined together in Cleveland to raise awareness for topics like sexism, racism, bigotry, discrimination and hate that affects several subgroups of American culture.

Though there were more marchers in 2017 — around 3 million — 2018 packed a punch. This year’s march spoke on new movements that have arrived throughout the past year, such as the trend, #MeToo, for women telling stories of sexual harassment and assault and the activist group and movement “Time’s Up,” which promotes awareness for women inequality.

Marchers took to the streets Jan. 20, but these same streets, filled with activism and passion a day before, were flooded once again with traffic and normal day-to-day activities Jan. 21.

It has been two weeks; the picket signs have been recycled or lay in the trunks of cars and protesters marched back into their everyday lives. The feeling of justice that once filled millions of Americans now dissipates back into feelings of frustrations as seemingly nothing changes.

Did marching work? Did walking around in circles change anything? And where do we, as a nation, go from here?

“Marches are for the marchers,” Holt said. “They are ultimately the people who will make a difference, who will try and make an impact. Historically, this difference is in the laws our government makes and holding accountable the people who perpetuate this unfair culture. Marches are only secondarily for those at home and the administrations above us. It is up to the marcher to make the difference.”

Holt continued to remark on the art of marching and the science behind change. It all begins with patience.

Holt said the nation should not expect to see change tomorrow or in a week. She explained the most important part of marching is the sense of unity it entails and utilizing this feeling as encouragement to continue working toward equality.

“You shouldn’t tell yourself that marching is enough,” said Sunny Matthews, the co-chair of the 2018 Women’s March in Cleveland. “A march is to make us visible and to spread a message to the nation. … Our goal is to make sure women and our allies know we have power too.”

Matthews called a march a “starting line” and “an art of war” for change.

“Marching is an art, but it’s almost like a practice of faith,” Holt said. “Those who seek change have something like faith. They have a grievance that has held them to a longing for more, a conviction that we can do better — and we can change this. Marching is like church and coming together to pray. You come together to provoke something on the outside that you feel on the inside.”

Both Matthews and Holt agreed a march is only a beginning. The best way to continue promoting equality is through voting, running for local office, being socially and politically engaged and continuing to support others in their fights against inequality as well.

Caroline Henneman is a humanities reporter. Contact her at [email protected]