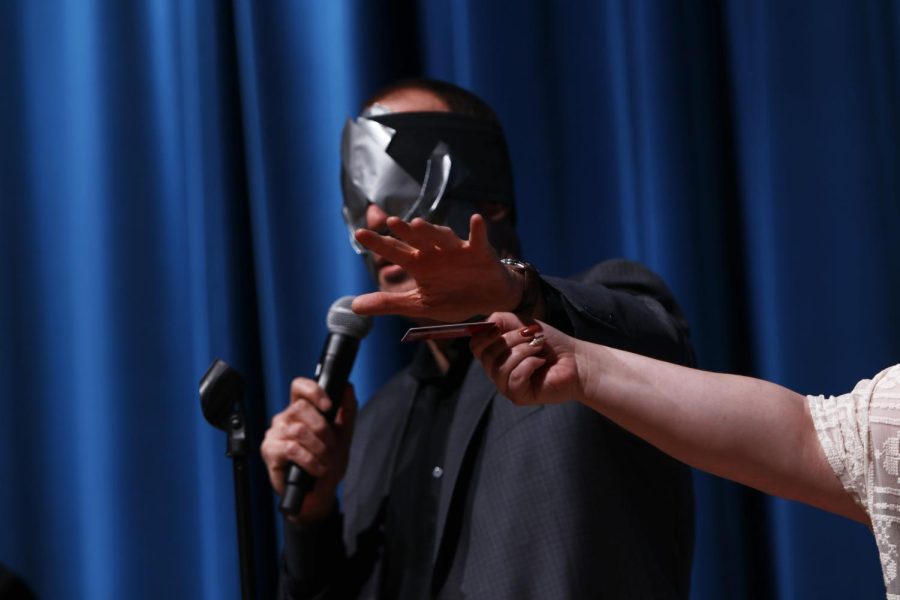 Mentalist Chris Carter creates illusions while being blind folded on Wednesday, Jan. 31, 2018. The Center of Student Involvement hosted the event in the Kiva.

Mentalist Chris Carter surprised students with his illusions Wednesday, Jan. 31 at the Kiva.

Hosted by the Center of Student Involvement, a small group of students were noticeably stunned as Carter did tricks no one thought possible.

“My act is really as close to mind reading and psychic appearing stunts as I can get without really being able to read people’s minds,” Carter said.

For the past 28 years, Carter has performed various acts in which he makes the audience believe he has the capability to read their minds.

Carter started as a kid magician, but with the help of his mother, a psychologist, he was able to incorporate using body language as an indication of what playing cards people were thinking and guessing correctly, which is what started the evolution of his current act.

“We had a hypnotist in the fall, so we looked to bring something different for the spring semester,” said Rebecca Blaha, the assistant director for student involvement. “The show is very fun and interactive.”

Audience members were at the edge of their seats while hearing Carter share accurate personal information about them without knowing them prior to the show.

He finished his show by bringing two audience members on stage with light bulbs with no attachment or way of turning it on and having the girls holding the separate light bulbs turn them on with their minds, which left the audience stunned.

“He’s a great entertainer. A really polished act, and a great performance,” said Michael Weber, a junior advertising major. “The tricks and his mind reading skills are really impressive.”

Rose Driehaus is the entertainment reporter. Contact her [email protected]