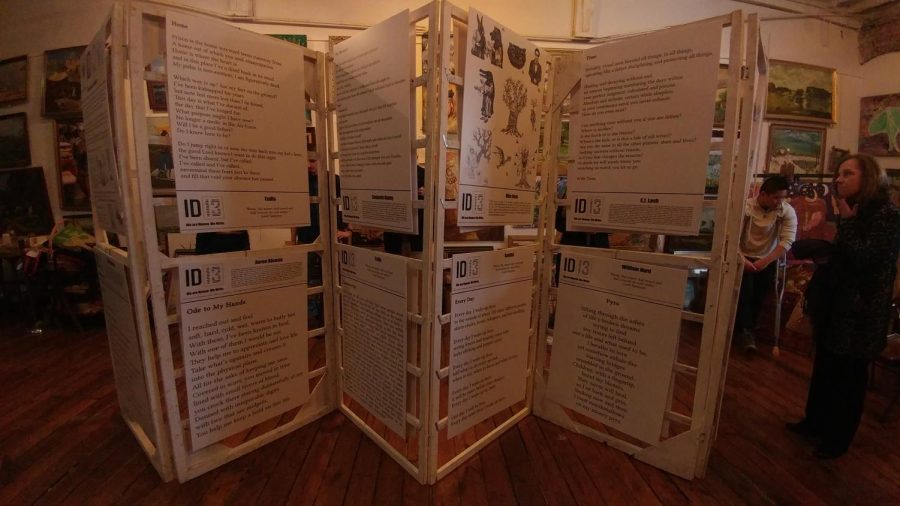 Poetry and art from incarcerated individuals are displayed at the FJ Kluth Art Gallery.

The slogan represents ID13, a project that displays poetry and art made by incarcerated individuals at Lake Erie Correctional Institution.

The display was co-founded by Halle Neiderman, a doctoral candidate within the English department and Christopher Dum, an assistant professor of the sociology department.

Neiderman initially received an email and reached out to Dum to create this collaborative project between the departments. Neiderman saw great promise within the program.

“For both the inmates to have a voice and feel humanized and also for English students to see what literacy does when it’s enacted in the public,” Neiderman said. “Also for students of criminology to see what actually is going on with inmates, what they’re feeling and how that comes out through art and writing.”

The name ID13 came from how the inmates signed with their prison ID’s on their works, and from the first section of the 13th Amendment.

The collection includes poems and art with varying emotions from anguish to hopeful and redemptive.

“It’s not just the writing, it’s having somebody from the outside come in and treat them like humans,” Neiderman said.

“A lot of them have started using their names, or a pseudonym,” Neiderman said. “I think the fact that there is a transition from using their ID’s to their actual names also indicates their evolution to feeling like humans again, at least in our presence.”

Dum explained what the slogan “We are Human. We Write” meant.

“We were trying to capture the idea of this project,” Christopher Dum said. “We have been seeing this, in that we are all human beings, we all have something to share, we’re all important. It’s so easy to think about people behind bars as people who aren’t human, who have no redeeming qualities.”

Throughout the project the inmates were handed prompts and learned about methods of writing, including editing and publishing taught by graduate student Molly Fuller.

“They were so interested in what I was saying, they were really engaged with the information I was giving them,” Fuller said. “They would have questions afterwards, when we were done there were a few who would come up afterwards and there was just a lot of gratefulness.”

Fuller said she was not sure what the project would hold, but was grateful for the experience.

“These people, especially those in the writing group, they want to improve themselves somehow,” Fuller said. “That’s why they’re there, they want to be better. That really got to me.”

Both Neiderman and Dum saw the need for their project, working with the people that others do not often think of.

“I really think it’s important to help give voices to people marginalized by society,” Dum said. “We can see ourselves and our own experiences in what they are writing.”

Dum wants people to focus on breaking down walls and joining, whether through experiencing the exhibit or something else.

“People are just being pushed farther away, so how we can bring people together?” he said.

Madison MacArthur is the diversity reporter. Contact her at [email protected]