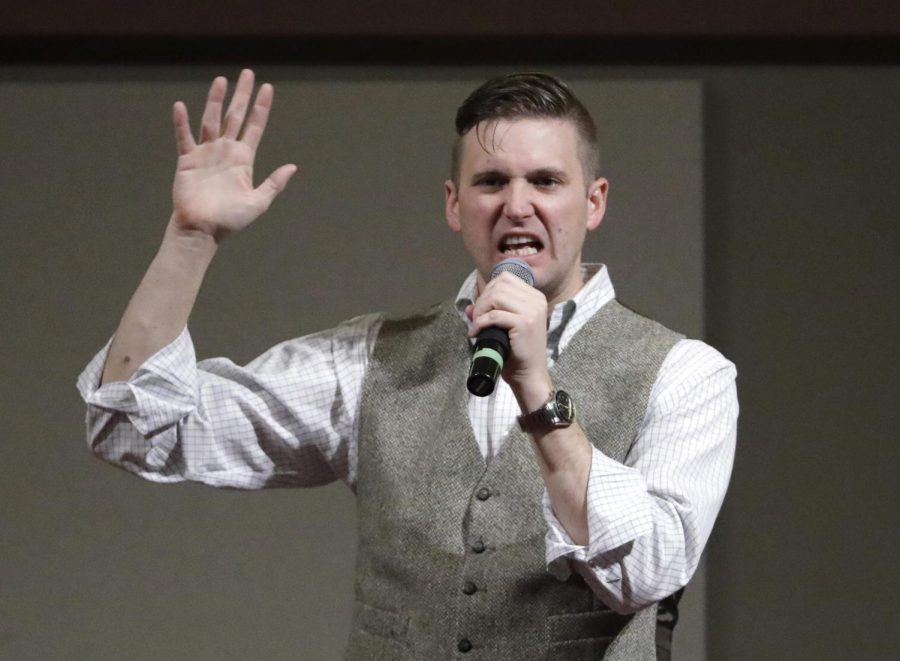 Richard Spencer speaks at the Texas A&M University campus in College Station, Texas Dec. 6, 2016. Spencer is taking legal action against Kent State, as he has with countless other universities who have refused him space to speak.

White nationalist Richard Spencer is ready for a fight with Kent State University—a legal one, at least.

After KSU rejected a request from his booker to hold a speaking event on May 4, the 48th anniversary of the on-campus shootings of four students by National Guardsmen, Spencer said a lawsuit “might very well be” the next step.

On Wednesday, Cameron Padgett, a Georgia State graduate student known for booking spaces on university campuses for Spencer’s college tour, contacted Kent State. He requested use of the Student Multicultural Center for May 4 to hold a speaking event with Spencer and Mike Peinovich, also a white nationalist, to talk about the Kent State shooting and left-wing group Antifa.

The next day, Kent State said it was “unable to accommodate” Padgett’s request because the last two weeks of the semester “are always an exceptionally busy time on our campus, with numerous activities marking the end of our academic year.”

Spencer believes the university blocked the speech because it is afraid of violent protests by Antifa.

Spencer calls it an “obvious case” of “the heckler’s veto,” a term coined by University of Chicago professor Harry Kalven referring to when a speaker is restricted by the government in order to prevent a reacting party’s behavior.

“Kent State is not claiming that I am going to engage in violence or that I will do anything other than give a speech like any other guest would give a speech,” Spencer said. “What they’re worried about is Antifa violence.”

Spencer claims Kent State’s actions are unconstitutional, and if his legal team takes the university to court, like it has other universities, it will lose.

“If they want to challenge me, it’s like, OK, fine, you’re gonna lose,” Spencer said. “I have absolute confidence because what we are doing is 100 percent above board.”

Spencer’s confidence comes from his fruitful legal battle with Michigan State University. After suing MSU for denying him a space to speak, he and the university reached a settlement Thursday allowing him to speak at a campus auditorium March 5.

“If they want to challenge me,” Spencer scoffs at Kent State, “good luck.”

What to expect from a speech

Spencer has a clear agenda for a speech at Kent State if the university allows him. The white nationalist said he would focus on how white people are being “dispossessed at universities demographically, morally, and intellectually.”

“Through affirmative action, whites are being pushed out,” Spencer claimed. “Effectively, if you’re a non-white applicant, you have a tremendous advantage.”

Spencer also said he would discuss the Kent State shootings if he were to speak on May 4.

“If I’m there on such a symbolic day, I obviously would not let that moment past without discussing it,” Spencer said.

Spencer said he draws “some interesting parallels” between the anti-establishment protesters during the Kent State shootings and white people renouncing the establishment currently.

“There are some interesting similarities in the sense of this rising movement of white identity—effectively, identitarianism—and the 60’s radicals. We are fighting the system.”

Kent State’s policy register outlines rules and protocols regarding “demonstrations, marches, and speakers.” University policy 4-03.1 states all speakers from outside KSU must be sponsored by a registered student organization or a university department. So far, Spencer and his associates have not obtained an on-campus sponsor.

According to the policy, Kent State has the right to cancel an outside speaker’s event if it violates criminal law, “substantially invades the rights of others” (including threatening health or safety) or “disrupts the normal activities of the university.”

The policy states that the “the director of campus life or a designee” is responsible for making the decision after consulting with police, the sponsoring organization and its advisor.

Kent State’s scheduling office takes care of the logistics of speaking events, but does not “impose limitations based upon the subjects to be discussed, or the background, or past associations of the speakers,” according to the policy.

If the event causes any damages, the campus sponsor is responsible for the costs.

According to the university website, the Student Multicultural Center is one of two rentable public spaces on campus. It costs $175 to rent and can accommodate up to 200 people.

This is not the first time Spencer and his associates have tried to speak on a college campus. Last year, several schools including Ohio State University and Penn State denied their requests to speak, citing safety concerns. In turn, Spencer and Padgett’s lawyer, Kyle Bristow, sued the universities in federal court for violation of free speech.

Some universities have let him speak, though. After originally denying Spencer’s request, the University of Florida allowed Spencer to speak in October at its performing arts center. Florida Gov. Rick Scott declared a state of emergency in the county ahead of massive protests and a large police presence.

According to the Gainesville Sun, the University of Florida ended up paying $600,000 in additional security costs, while Spencer was on the hook for just over $10,000 in rental fees and some security costs.

Along with his scheduled speech at Michigan State, Spencer is expected to speak at the University of Cincinnati on March 14, which is during its spring break. However, his legal team is suing the university over the $11,000 fee it imposed on him for security. He is in talks with the University of Michigan to speak there as well.

Ben Orner is the enterprise producer for KentWired. Contact him at [email protected]