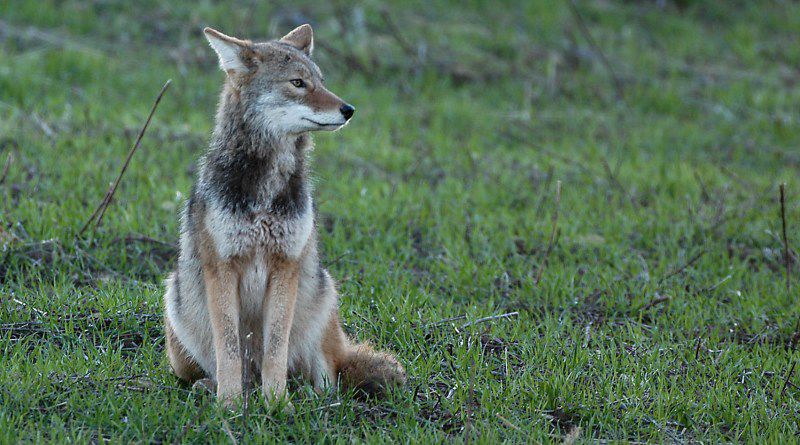 Sitting in her room at night, Kent resident  and native Rachel Gundlach hears the howls of a pack of coyotes. Her cocker spaniel, Fuji, sits on her lap and stares out the window, barking at the sound.

Gundlach knows about coyotes. She lives in a rural area, close to a coyote den. As the owner of numerous pets, including cats, dogs and horses, coyotes are always present in the back of her mind.

“I hear them howling at night, almost every night,” Gundlach said. “Whereas before, I didn’t really notice it as much.”

While coyotes are not native to Ohio, they now populate nearly the entire state. While many species do not adapt well to habitat change, coyotes are versatile and prefer to live in urban and suburban areas, such as Kent.

“It’s easier to explain where coyotes don’t live and what coyotes are not willing to eat than to say where they are,” said Jamey Emmert, a wildlife communication specialist with the Ohio Division of Wildlife.

Emmert said the coyote adapts its diet and survivability, making them a versatile species. It feeds on rodents, birds and discarded pet food, among other things. While it is unusual for it to go after pets, it does happen.

Ronald Gardner, one of two animal control officers for the City of Kent Police, said officers aren’t trained to handle wild animals. Kent’s animal control unit is responsible for dealing with domestic animals like cats and dogs. Gardner’s job mainly includes trapping feral cats and catching stray or lost dogs he then takes to the pound.

There is a class offered through the state of Ohio that educates officers on how to handle coyotes, but Gardner hasn’t taken it.

“If a person had a (coyote) problem,” Gardner said. “They would have to call a professional trapper.”

The police department keeps a list of six licensed trappers they recommend if anyone needs help with a coyote issue.

Gardner said more attention is being paid lately to the coyote problem because the animals are adaptive to the environment. The numbers of coyotes isn’t declining — factors like hunting and loss of habitat don’t seem to affect them the way they do other species.

But Gardner said coyotes aren’t an issue in Kent.

“I don’t think they’re as big a problem as the local people are saying,” Gardner said. “We haven’t had calls or gone out and found any evidence of (coyotes causing issues).”

“Coyotes are very intelligent animals,” Emmert said. “And as a result, they’re very curious,” which leads to concerns from residents about their pets and children.

Coyotes are drawn to activity such as someone doing lawn work or someone playing with their pet in the yard. Emmert said that while coyotes may confuse smaller dogs and cats, they are never actively looking for domestic prey.

Whether or not the coyote runs or stands its ground, pet owners should be aware that keeping the dog contained can keep the dog safe.

Cats are smaller and can easily be mistaken for prey. Because many cats are allowed to roam outdoors, pet owners should be cautious about letting their cats stay out overnight, as coyotes hunt nocturnally.

Emmert’s suggestions for keeping coyotes from getting too comfortable is to make noise, have motion-controlled lights and clean up food waste. She suggested that anything to keep “wildlife wild” would prevent conflict.

Despite not being labeled as “overpopulated,” coyotes are in all 88 counties in Ohio.

Coyote populations fluctuate depending on many factors, such as food supply and weather. The better both are, the more puppies a coyote female will have in the spring.

If the proper precautions are taken, residents shouldn’t worry a coyote will attack without being provoked.

Gundlach, who has been Fuji’s owner for two years, doesn’t worry too much, so long as her dog is safe inside when nighttime comes.

“It is something in the back of my head,” Gundlach said, “when I hear them howling at night.”