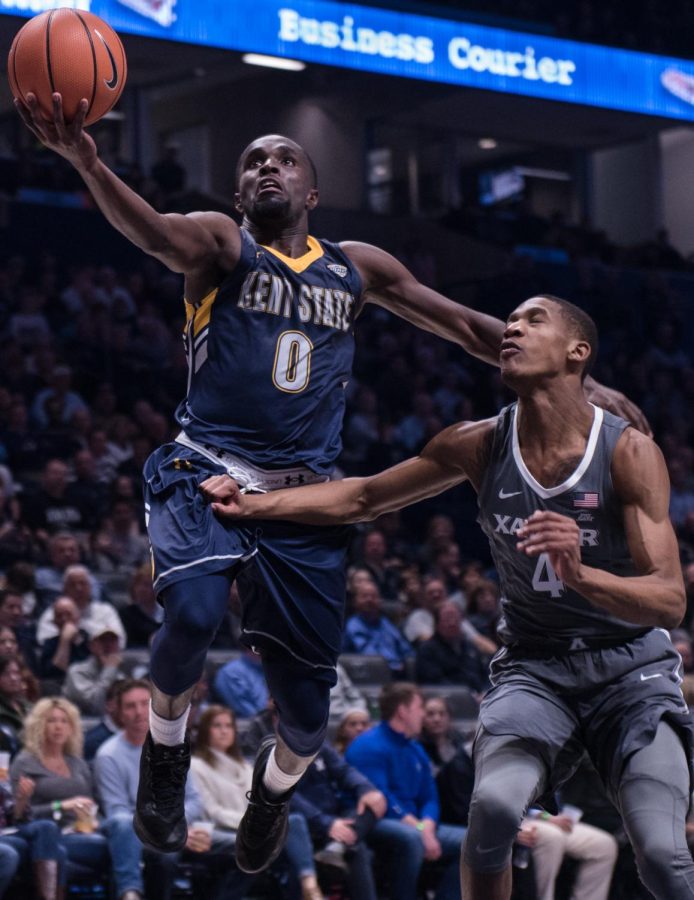 The Flashes came into the game on the back of a 6-7 roller coaster ride through nonconference play, which included a home loss to Southeastern Louisiana and defeats to Albany and Wright State on the road.

Walker entered the game Tuesday in the midst of one of the worst shooting slumps of his time at Kent State. In the four games after his return from injury on Dec. 9, Walker shot 23-for-73 (31.5 percent) from the field and 8-for-34 (23.5 percent) from three-point range.

Walker and the Flashes had a chance to wipe the slate clean heading into their conference opener at Northern Illinois, but couldn’t take advantage, as the star guard struggled again as Kent State (6-8, 0-1 MAC) fell to the Huskies, 75-61.

“It’s tough to win on the road in this league,” coach Rob Senderoff said. “Tonight, we certainly had our chances. (With) seven minutes left, it was a three-point game. There are a number of tough missed plays we had back-to-back-to-back that we’ve got to make, and right now, we’re just not making them. In order for us to turn this around, we’ve got to make those plays.”

The loss played out in a familiar way for the Flashes; a closely contested first half was overshadowed by poor defense and missed shots in the second.

The Huskies (8-6, 1-0 MAC) led, 33-32, after a first half in which both teams shot poorly, and neither could catch its footing. After the teams traded baskets for the first 10 minutes of the second half, the tide quickly turned in Northern Illinois’ favor.

A layup from junior guard Dante Thorpe gave Northern Illinois a 52-51 lead with 9:49 left in the game, and the Flashes never led again. Kent State didn’t make a field goal for the next five minutes and 20 seconds, as the Huskies went on a 12-3 run to seal the win.

Northern Illinois outscored the Flashes, 42-29, in the second half.

The Huskies finished with a 42-32 rebounding advantage.

Junior guard Levi Bradley led the Huskies with 25 points, three off his career-high set in the season opener against Green Bay. Bradley shot a perfect 14-14 from the free-throw line, a season-high in both makes and attempts. He added 14 rebounds and four assists for his second double-double of the season.

Sophomore guard Eugene German added 20 points for Northern Illinois. He has scored at least 20 points in eight games this season, including in six of his team’s last eight.

Walker continued to struggle to find his shooting touch. The junior guard scored a team-high 18 points on 5-for-17 shooting, including 1-for-10 from three-point range. He is now shooting 27.2 percent on three-pointers this season.

As a team, the Flashes finished Tuesday night’s game 4-for-25 (16 percent) on three-pointers, the second straight game in which the team shot below 20 percent from beyond the arc.

Senderoff compared this year’s struggling team with last season’s MAC championship-winning version of the Flashes for some clarity on how to right the ship.

“When you think back to our team last year, in second halves, we were great defensively,” he said. “We were down at halftime in almost all of those games, and we came back to win them. This year, it seems like it’s the opposite. We’ve had leads, but we’re really struggling on both ends of the floor in the second half.”

The Flashes return to Kent for their first home conference matchup of the season against Central Michigan (12-2) at 7 p.m. Saturday at the M.A.C. Center. The Chippewas opened their MAC schedule with a 75-50 dismantling of Ohio University.