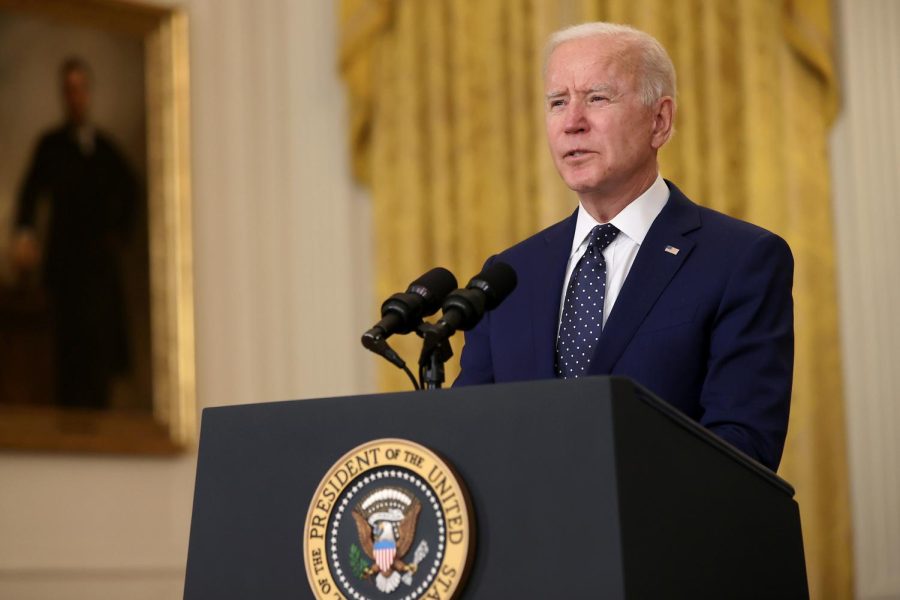 WASHINGTON, DC - APRIL 15: U.S. President Joe Biden announces new economic sanctions against the Russia government from the East Room of the White House on April 15, 2021 in Washington, DC. Biden announced sanctions against 32 companies and individuals that are aimed at choking off lending to the Russian government and in response to the 2020 hacking operation that breached American government agencies and some of the nation’s largest companies. (Photo by Chip Somodevilla/Getty Images)

“He was just calling. He knows how it is to lose a family member. And he knows that the process of what we’re going through so he was just letting us know that he was praying for us, and hoping that everything would come out to be OK,” Floyd told NBC on Tuesday morning.

The call from the President came the same day closing arguments were presented in the Chauvin trial. The jury in the trial began its deliberations on Monday and are set to continue Tuesday.

Biden has been closely monitoring the closing arguments, CNN has reported, fearful that a controversial verdict could inflame racial tensions and further escalate a deepening crisis in confidence with the nation’s police forces.

The President voiced his concern about potential fallout from the trial during a private meeting last week with members of the Congressional Black Caucus, people familiar with the session previously told CNN.

Biden called the Floyd family last year shortly after George Floyd’s death, and later the then-presidential candidate traveled to Houston to privately meet with the family and offer his condolences.

Widespread protests against police brutality and racism swept the nation over the summer after a video surfaced showing Floyd handcuffed and on the ground saying, “I can’t breathe,” as Chauvin kneeled on Floyd’s neck.

Chauvin is charged with second-degree unintentional murder, third-degree murder and second-degree manslaughter in the death of George Floyd. He has pleaded not guilty to all three charges.

Biden’s aides have begun drafting statements for the President to deliver, either in writing or in person, once a verdict is rendered, CNN has reported. Vice President Kamala Harris has also been involved in conversations with national Black leaders.

The White House will seek to strike a balance between acknowledging an expected outpouring of emotion while still calling for calm, officials told CNN. Biden wants neither to replicate the heavily militarized response to protests under former President Donald Trump nor to appear absent in the face of violence or unrest directed at law enforcement, one official said.

The President also believes he must directly acknowledge the systemic racism that pervades criminal justice in America, advisers say.