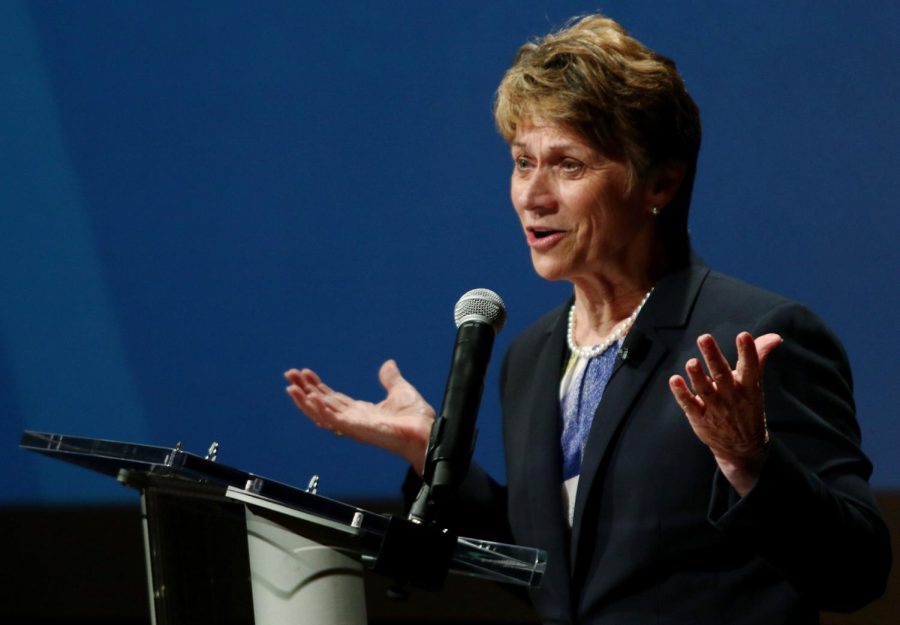 President Beverly Warren gestures while delivering the 2017 State of the University address in the Kiva on Tuesday, Oct. 17, 2017.

President Beverly Warren spoke about the upcoming implementation of a “guaranteed tuition plan” for incoming students during the final Faculty Senate meeting of the semester Monday.

“In this plan — if it’s approved — eligible, new, first-year, degree-seeking undergraduate students would experience a tuition cost that would then be consistent and guaranteed over four years,” Warren said. “The idea there is that this has been part of a legislative agenda, and many universities are going in this direction.”

The plan will be presented at the upcoming Board of Trustees meeting Wednesday for approval to move forward.

“We will be recommending (this) model to the Board of Trustees, then reserving opportunities to explore what should be the tuition cost that we would present to the board at its March meeting,” Warren said.

The final Faculty Senate meeting of the semester often sees an influx of changes and additions to colleges and departments. The following are the approved changes made by faculty senate, which will take effect in the next academic year:

Two Master’s programs in the College of the Arts were consolidated: Master’s of Arts programs in Crafts and in Fine Arts have been merged into a Master’s in Studio Arts, with a concentration in either subject available

– The Liquid Crystal Institute in the College of Arts and Sciences has been renamed to Advanced Materials and Liquid Crystals Institute more closely reflect the scope of work done within.

Warren also spoke about her hopes for board approval of the facilities master plan, a 10-year schedule meant to give the university a strategy for construction, renovation and innovation in the coming years.

In detailing the plan, Warren described the potential to turn the front campus region into the “gateway” of the university.

“We think that there is not a really clear main entrance to Kent State University,” Warren said. “There are so many ways to find access into the university, so we would close Terrace (Drive) and declare Midway Drive as our main entrance. Then we would try reroute traffic so that as we’re now recognizing an iconic gateway into Kent as our second transformation strategy, we then move into emphasizing a compact, walkable core.”

Warren said she hopes to move vehicle traffic to the outskirts of campus, clearing bigger walking paths for students.

“We want our students to feel this idea of being able to walk in their community without having to dodge traffic,” Warren said.

The master plan also includes a proposal to create a new “innovation zone” near the Starbucks on Main Street. The innovation zone would be a building meant to house design studios for architecture and fashion majors, whose academic buildings reside in Front Campus.

Warren said the plan will be presented to the Board of Trustees Wednesday, with the hope to secure funding for the first phase of the master plan in March 2018, when the next trustees meeting will be held.

In response to Warren’s description of the master plan, Thomas Jansen, a retired faculty member who previously worked in the College of the Arts, suggested the university consider utilizing currently unused property, whether it be developing on the land or selling it.

“If these properties were sold or somehow became lucrative, we could afford quite a few of the things (Warren) identified,” Jansen said.

Mark Polatajko, the senior vice president of finance and administration, said all unused properties are included in the evaluation of the future phases of the master plan.

“We’re evaluating those and developing recommendations on what to actually do with those, specifically the golf course, as (Jansen) mentioned,” Polatajko said. “One of the prevailing recommendations is for us to reach out to the development community and try to utilize it for its best and highest use.”

Polatajko suggested the possibility of selling the golf course property or partnering with a developer to drive operating revenues.

The university also seeks to secure state funding through the Capital Budget, a $300 million fund split up among Ohio universities, school districts and state agencies for facility construction and repair every two years.

Warren said Kent State’s portion of the fund is around $25 million, and she is confident the university will be able to secure the funds.

“On that request includes renovations to the old School of Art building — that old, iconic facility that needs to be lifted up to a new era of use,” Warren said. “It will also include renovations to White Hall, Rockwell Hall, Henderson, Cunningham and Williams Halls, as well as seven projects; one each on each of our regional campuses.”

Warren expects to get approval of the budget from Gov. John Kasich’s office at the beginning of January.

Warren also took a moment to speak about Devin Moore, a Kent State student who died a week prior while playing basketball at the Student Recreation and Wellness Center.

“We’re all grieving over the loss of Devin, who was such an outstanding student and an exemplar of what we believe in at Kent State University and how he exemplifies that in the way he lived his life and in the service he provided, not only to his fraternity, but to his university and to his community,” Warren said.