FGCU explodes in first half for victory in women’s basketball 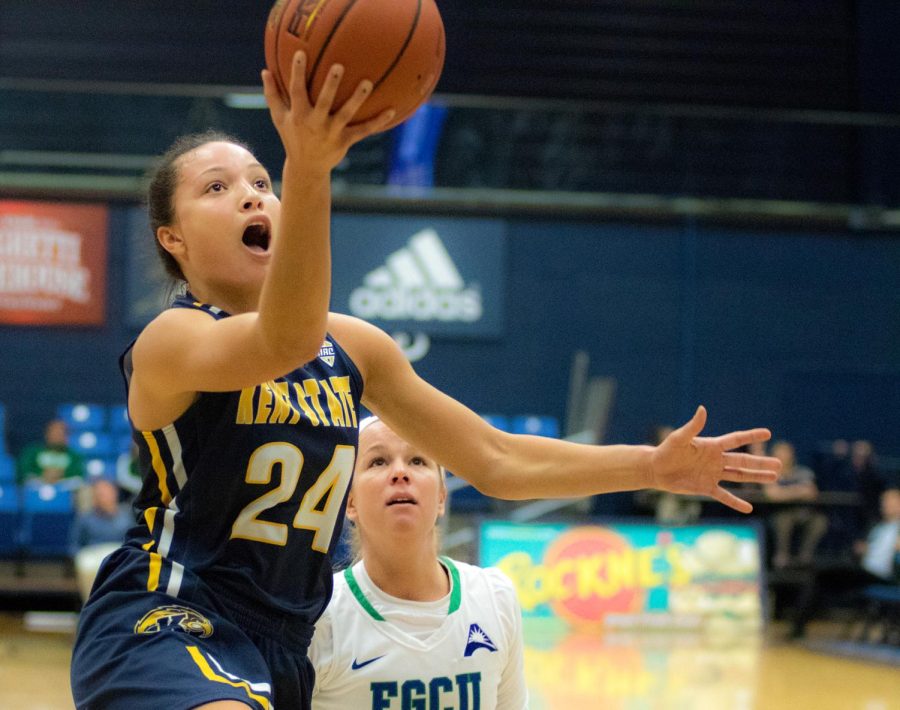 After starting the season 2-0, it was still unclear what kind of team the Kent State women’s basketball team was. They struggled in their opening games against two less than formidable opponents.

The Eagles outplayed the Flashes the entire first half, with Kent State leading for just 39 seconds in the game.

“It took us out of our rhythm,” Starkey said. “Our game plan is to go to her early and often, and she picked up two early ones in the first minute of the game. It’s hard to overcome. It’s certainly where our problems began, but it wasn’t where they ended.”

The Flashes couldn’t score without Korinek in the game and ended up scoring just 10 points in the first quarter to fall behind 24-10.

The Flashes had 12 turnovers at the half, while the Eagles were 9-18 from three-point range. They trailed 55-29.

“You can’t give up 55 points in a half and expect to win a ball game,” Starkey said. “In every game or scrimmage we’ve played so far we’ve had a bad quarter or half. That’s going to come back to bite us. We have to figure that out as a coaching staff and as a team so that doesn’t continue to hurt us.”

The Flashes showed some fight coming out of the half.  They outscored the Eagles 18-12 in the third quarter. They held the Eagles to four made field goals.

“I’m really proud at the way they continued to fight,” Starkey said. “We got better as a team in the second half. That was my biggest goal. We didn’t want to practice bad habits like we did in the first.”

At the end of the third quarter, the Eagles’ bench outscored the Flashes’ bench 21-6.

The Flashes came out in the fourth quarter with good effort once again. They shot 19-25 from the free-throw line in the game. Three Florida Gulf Coast players fouled out.

Despite the loss, Kent State played three freshmen: Erin Thames, Kasey Toles and Monique Smith. Starkey was pleased with how they looked.

“We got some good minutes out of some freshmen,” Starkey said. “You can’t teach game experience, you just have to get it. I was pleased that we had three freshmen that came in to get decent minutes and maybe get a little more comfortable out there on the court.”

Kent State committed 23 turnovers, while the Eagles had 13.  The Flashes went on to lose the game 80-62. They finished with just 12 assists, and Naddiyah Cross had six assists.

“We knew we weren’t going to go undefeated this season,” Starkey said. “We’re obviously not pleased at all with the first half and much more pleased about the second. We’ll learn from it.”

McKenna Stephens had seven points and a team-high 10 rebounds. Korinek finished with 19 points in just 20 minutes.

Alexa Golden sat out the entire second half with ice after she injured her ankle.

“We’ll wait and see what happened with it,” Starkey said. “We have our athletic training staff looking at it. I think she got it pretty good, but we’ll see how the ankle does tonight and tomorrow, and we’ll make a decision. Obviously that’s a big blow to us if she’s not able to play tomorrow.”

The Flashes will play again Saturday in the Akron Classic against Southeast Louisiana at 12 p.m.