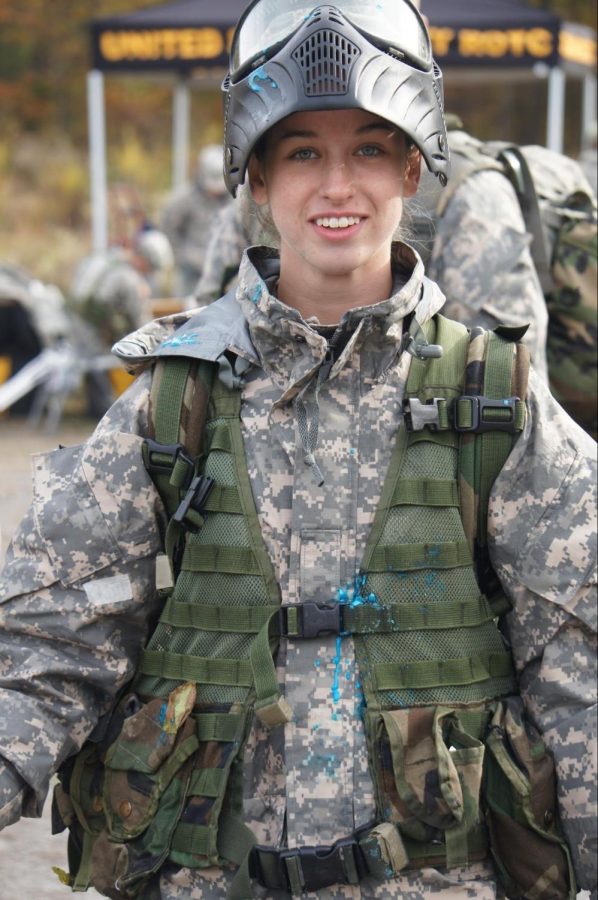 The Golden Eagle Battalion of Kent State’s Army ROTC put their knowledge of military tactical training to the test Friday, Nov. 3 and Saturday, Nov. 4 to get ready for Cadet Summer Training.

Every semester, the Youngstown State University and Kent State battalions come together to take on obstacles, missions, battle drills and other military techniques as practice to further their training.

“It’s kind of like a ‘crawl, walk, run,’ we like to call it,” said Robert Stephenson, a junior business management major and a cadet.

The first step is at the squad level. The next two, spring semester and summer training, are at the platoon level, Stephenson said. Cadets build onto their training and leadership skills in this order.

Avery Millis, a senior criminology and justice studies major and a cadet, planned this fall’s FTX along with guidance from cadre like Simms. Millis oversees all operations for Kent State and Youngstown Army ROTC cadets. The planning stages involved using Cadet Summer Training as an example and manipulating the obstacles tested there to fit into FTX.

Of the 80 cadets who participated, squads formed with nine people per squad. One was the squad leader, two played the team leaders and the remaining cadets filled out the team.

“There is a process called Troop Leading Procedures,” Millis said. “We train them going step by step how to plan, prepare and execute for any mission that they are given.”

Cadets practiced formations in the Commons Friday. Starting at 4 a.m. Saturday, cadets were off to Camp Ravenna to put their training to the test in a much less discernible terrain.

“As soon as the big orange ball was breaking the horizon, they were stepping off and executing missions,” Simms said.

Millis helped brief junior cadets about tactical missions. The cadets then had to create a plan to carry out that mission, brief their own squad and execute it with them. Afterward, the squad and their leader were reviewed for what they did well and what they could do better.

Cadets carried paintball guns with them during the missions to shoot at challenging opponents. Missions included reconnaissance, attack, defense and ambushes.

“It was a little bit challenging at times, but everyone is learning,” he said. “You’re there to make other people better.”

Kayla Chmiel, a junior computer science major and a cadet, was also a squad leader. She used what she learned from a previous attack and defense situation to aid her.

Chmiel participated in FTX before, but this time was unique.

“This time I had a good understanding of what we were supposed to do,” Chmiel said. “I learned why people told me what to do when I was a follower. I felt more confident as a squad leader.”

Chmiel said FTX was a learning opportunity and chance to better her leadership ability.

“It’s definitely good to have good leadership — someone who is willing to take into account what other people in your squad think,” she said. “It’s good to be able to test how you react under a more stressful situation.”

Alexus Kellow had an unusual experience as a freshman cadet. The exploratory major was appointed team leader after her squad and team leaders were “shot” in an attack.

“I really didn’t know too much,” Kellow said. “I watched my squad leader and other team leaders, and they really knew what they were doing. I had to use what I saw throughout the day and base (the attack) off that.”

“If one squad leader is struggling a little bit, this is a very good eye-opening opportunity for them because now they know, after this weekend, what they have to work on,” he said.

FTX in the fall is more of an evaluation of the training both for participants and how it was planned. It allows the battalion to discover what techniques need more work so they may address those in the spring.

The spring FTX will be a joint training exercise with battalions from the University of Akron and John Carroll University. Simms said it offers a new level of complexity of peer leadership, along with unique personalities.

Army ROTC cadets from all over the country will be participating in Cadet Summer Training.

Kathryn Monsewicz is the military and veterans reporter. Contact her at [email protected]