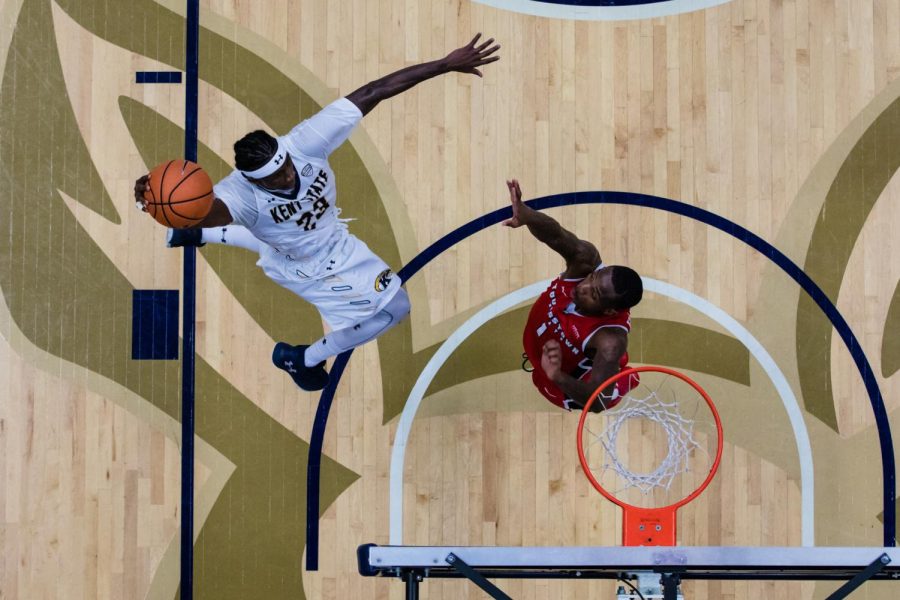 Kent State junior guard Jaylin Walker goes up for a dunk during the season opener against Youngstown State Saturday, Nov. 11, 2017. Walker was fouled on the play on his way to a 20-point night.

The Kent State men’s basketball team headed into its game at Norfolk State Wednesday night on the back of a three-game losing streak without leading scorer Jaylin Walker due to an ankle injury.

Despite their opponent sporting an 0-6 record, the Flashes once again knew they were facing adversity heading into the contest.

Kent State (4-3) answered the questions, perhaps unconvincingly, with a 79-70 road win over the Spartans (0-7). The Flashes scored 51 points in the second half after trailing at halftime.

After practice Monday, coach Rob Senderoff emphasized the Flashes’ need to close out games after their poor second half performances in their three losses.

“For 60 of the 80 minutes (the team played in its two losses against Valparaiso and Loyola Chicago), we competed at a high level,” Senderoff said after practice. “We just came up short for the second 20 minutes of the Loyola game. We didn’t compete the way we need to. … I think we’re trying to learn how to win.”

The Flashes used a balanced attack to cancel out Walker’s absence.

Center De La Rosa bounced back from a tough outing in last weekend’s Savannah Invitational with 19 points and 10 rebounds in a season-high 26 minutes before fouling out for the second straight game. All five of his fouls came in the second half. He turned the ball over four times and added three blocks.

De La Rosa continued his impressive free throw shooting, making 13 of 14 to take his season percentage to 87.2, a team best. He made all 10 of his free throw attempts in the second half.

Junior point guard Jalen Avery helped to pick up some of Walker’s slack with his highest scoring output of the season. He scored 18 points and had four assists and three turnovers. He has had more assists than turnovers in every game this season.

Senior guard Kevin Zabo saw a significant increase in minutes with 34. He averaged 18.2 minutes in the team’s previous six games. Despite a poor shooting night (4-for-15 and 3-for-9 on three-pointers), he scored 15 points to match his season-high. He also added five rebounds and four assists.

The Flashes return to the court at 7 p.m. Saturday against Cleveland State at the M.A.C. Center.

Cameron Hoover is the sports reporter. Contact him at [email protected]