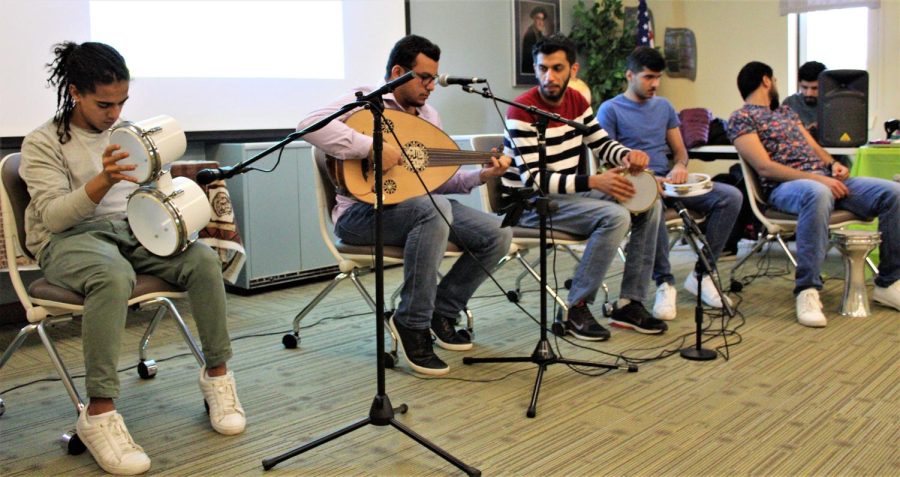 Global Jams also gave people the opportunity to donate as part of a week-long fundraiser for study abroad scholarships.

“We’re just trying to do some different programming that features music and to have a relaxing kind of day,” said Linda Robertson, the director of the Gerald Reed Center for International and Intercultural Education.

The event began with Himalayan music performed by refugees from the International Institute of Akron.

“They brought students who are doing almost hip hop-like inspired dancing,” Robertson said. “It shows the transition of both of their native language but kind of in the new hip hop sort of thing, so that was really interesting.”

The Kent State University Ukulele Club followed. While the club consists of about 40 students, only four attended the event.

“It really was a jam session,” Robertson said. “They just sat on the carpet in the middle of the room and played and sang for us.”

Later in the day, there was a performance of Saudi Arabian music.

“I think it’s a lovely opportunity,”  Lolagul Raimbekova, a graduate instruction and curriculum student from Tajikistan, said. “Where else can we hear this lovely music and see these people? It’s just such a great opportunity to bring these guys just a step away from us.”

Mustary Mariyam, an early childhood education graduate student from Bangladesh, enjoyed the performance and agreed that it was important for students to attend.

“It gives appreciation to learn about others too, and experience something they may not be used to seeing,” Mariyam said.

Raimbekova said she feels a part of what is going on in the community.

“It makes you feel honored, valued and a part of a bigger community,” Raimbekova said.

“I have always had a curiosity in different cultures, so this was always interesting to me because I am Hispanic too,” Shelby Hard, a senior psychology major, said. “It’s different and good to know. I wasn’t expecting to get up and dance with them, but it was very cool to get up and do something different that you don’t always see traditionally in America.”

International Education Week spans all week with a range of events. A full schedule can be found on the Office of Global Education’s website.

Madison MacArthur is the safety reporter. Contact her at [email protected]