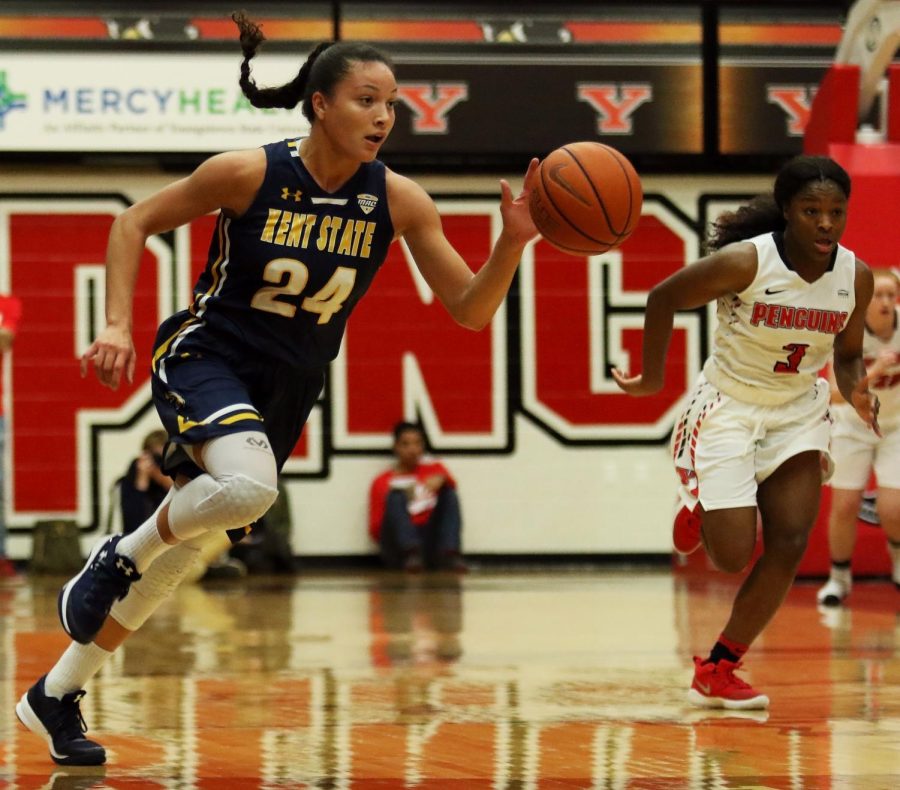 At first glance, the Kent State women’s basketball team’s 4-3 start to the season might not seem overly impressive.

But considering their tough strength of schedule, the team’s start is encouraging.

The Flashes’ three losses have come from No. 14 Stanford and mid-major powerhouses Florida Gulf Coast and Gonzaga.

“I’m pleased overall with our progress,” coach Todd Starkey said. “I think we’re better than we were when we started with our scrimmages and at Northern Kentucky and Youngstown State. I think we’ve shown really good progress, but I think we have a lot of work to do.”

The Flashes have had strong moments against the good teams but haven’t been able to put together four good quarters. In the three losses, they have allowed 23 points per game off turnovers.

Starkey believes there are multiple reasons for the amount of turnovers they have committed.

“I would say the good majority of our turnovers are from a lack of focus and being careless,” Starkey said. “Some of it has more to do with the teams we’ve played. Florida Gulf Coast was really good at pressuring us. Against Stanford and Gonzaga — they’re just really talented.”

The lack of focus is perhaps the key ingredient to putting together four consecutive great quarters.

Starkey said it’s all mental, and “your mind tells your body what to do.”

Some of the players think the team is off to a good start, but they aren’t necessarily satisfied with how they’ve played.

“A record of 4-3 is a pretty good start,” said McKenna Stephens, a graduate student forward. “We played some really tough teams in Vegas. I think we’ve learned a lot, and we need to go into these next five non-conference games with high intensity and just take what we’ve learned and get some wins.”

The Flashes are at their best when they are good defensively. They outscored the Penguins, 37-24, in the second half against Youngstown State. In the last 15 minutes against Memphis, they outscored the Tigers, 40-14, and held them to just two-of-15 shooting in the fourth quarter.

The winning formula has been tough defense, slowing the game down at the free-throw line and working the offense through senior forward Jordan Korinek.

“She’s in a much better place than she was last year at this time,” Starkey said of Korinek. “She’s playing with a lot more confidence right now. She’s really starting to understand the game and how to score from different positions on the floor and not just in the post.”

Although a tough schedule has resulted in losses, Kent State has gained experience against top programs that will help the team as the season continues.

“Those tough games have really prepared us for the future,” Stephens said. “When you play teams like that, you can’t have the lapses that we had, and the same thing will go for the conference. When we play Central (Michigan), if we have two or three lapses in a couple minutes, we’re going to lose.”

Based on the start, it’s difficult to tell if the Flashes will get back to last year’s form, but Starkey has been pleased with the team’s ability to respond in tough situations.

Without Larissa Lurken, the Flashes’ success this season was a question mark. Who would lead the team? Who would the offense go to? How could they replace her?

While they can’t replace one of the best scorers in the country from one year ago, they have managed to win in different ways, led by aggressive inside play leading to free throws. Kent State is third in the country in free throws made.