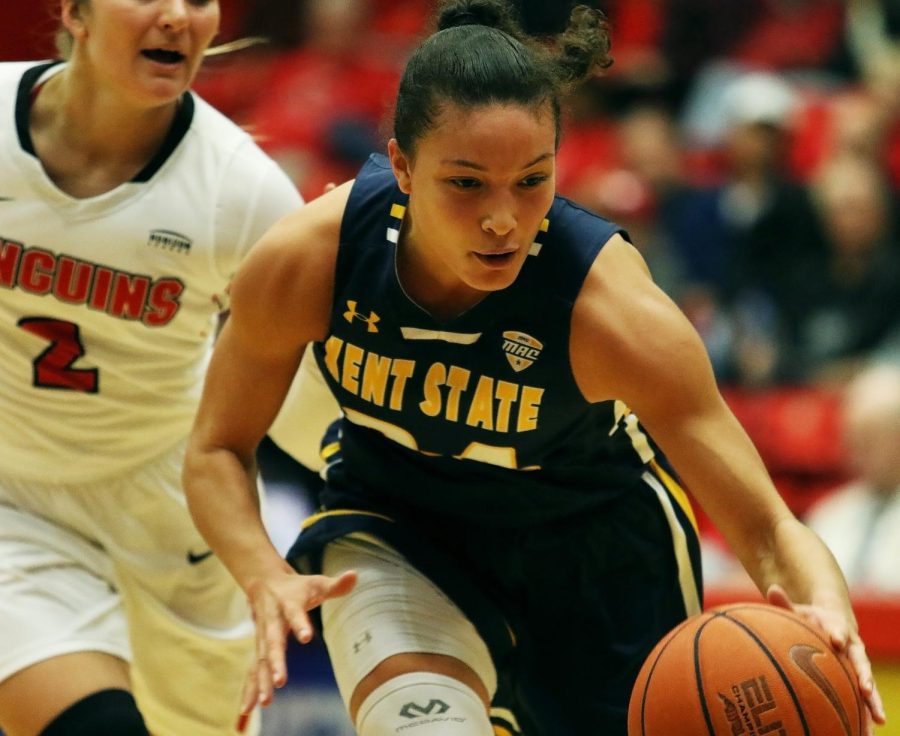 After one quarter of play in their Tuesday afternoon matchup against Youngtown State, things looked bleak for the Kent State women’s basketball team.

The Flashes were a dismal 1-8 from the field, with their lone basketball coming on an Alexa Golden layup with seven minutes left in the quarter. To make matters worse, the Flashes had committed eight turnovers, and Jordan Korinek, the facilitator of their offense, was being double-teamed every time she got the ball, which was something that threw the Kent State offense off.

Luckily for the Flashes, coach Todd Starkey switched game-plans, now having the Flashes offensive run through the aggressive play of their guards.

Starkey and the Flashes (2-0) went on to defeat the Penguins (0-2) 55-44, with guards McKenna Stephens and Alexa Golden leading the way with 17 and 16 points, respectively.

“I thought we rushed a few things, we missed some options,” Starkey said after the game. “They had a good game-plan for us, and we just had to get our feet wet. We just called a few actions that switched the side of the floor to get McKenna some shots.”

After their sluggish first quarter, the Flashes were able to put together a solid second quarter, outscore Youngstown State 16-9, and taking their first lead of the game with 2:51 left in the half, before going into the locker room down 20-18.

The sluggish quarter wasn’t a surprise to Starkey.

“I think we have to start there and work out,” he said. We’ve had a bad offensive quarter in every scrimmage or game we’ve played this year, so we’ve got to get that figured out.”

The Flashes came out of the locker room firing on all cylinders, and took the lead for good on a Stephens three-pointer halfway through the third quarter.

Korinek finished the night with 10 points, but sat most of the second half due to foul trouble, which Stephens believes could have thrown off the Penguins defense.

“We pulled Jordan out, and I think their defense was confused on what to do since they couldn’t just stop her,” she said.

The Penguins were led on offense by guard Indiya Benjamin, who finished with 12 points. In total, the Penguins had trouble finding their offensive rhythm, finishing 17-56 from the field. The Penguins, who are known for their three-point shooting, finished 5-25 from behind the three-point line.

“Our defense was phenomenal, we had a couple of lapses, but not many,” Starkey said. “I was really proud of the way we fought defensively and how we contested their threes. They still shot 25, but of those they only got really three or four open looks. Our interior defense was pretty good.”

Stephens’ scoring versatility was on display all game, as she finished 7-10 shooting, including 2-4 from behind the arc. Stephens is back with the team as a graduate student after going through senior day last year with the team and having offseason hip surgery.

When asked she was happy to be back with the team, she was quick to answer.

Henry Palatella is the sports editor. Contact him at [email protected]