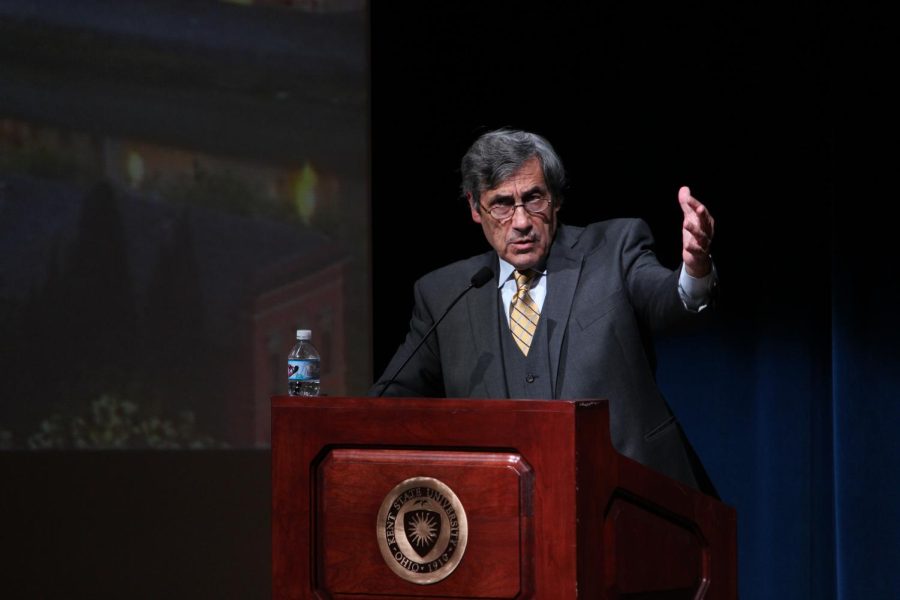 Giuseppe Mazzotta, a sterling professor of Italian language and literature at Yale University, delivers a speech on the Italian Renaissance in the KIVA Wednesday, Nov. 8, 2017.

Giuseppe Mazzotta, a sterling professor of Italian language and literature at Yale University spoke on the ways the Italian Renaissance shaped today’s society to a full audience in the KIVA Nov. 8.

Mazzotta started his presentation saying he felt the secrets of Kent State, explaining the secrets are the people and faculty who emanate intellectual energy.

Mazzotta urged students to get three key ideas out of his lecture: Beauty, power and passion, which he said are related to each other.

“The Renaissance is a process,” Mazzotta said. “It was a birth that went on for centuries.”

Mazzotta shared a passage to the audience from Italian philosopher Giovanni Pico della Mirandola to exemplify how the Renaissance is a state of mind and how it affects so many people.

“The fact is that the Renaissance is the point of resonance where wisdom scattered all over the world and the idea of man being a wonder, man being the miracle,” Mazzotta said.

Italian philosophers were a point of emphasis during the lecture. Mazzotta went on to talk about Dante Alighieri and Giambattista Vico and how they interpreted the Italian Renaissance.

Mazzotta described Pico as the “man of famous intellectual powers” who gives us the idea of liberty.

Mazzotta emphasized Dante’s idea of looking at things in the light of the whole and educating all. Mazzotta alludes to Dante’s “Divine Comedy,” bringing up the idea of love and liberal arts.

“It is the story of a journey,” Mazzotta said. “It’s about learning what love is, and it’s an ancient question.”

Mazzotta said Dante’s “Divine Comedy” isolates love and becomes a crucible for all other issues, which he explained is the idea that really started the Renaissance.

The lecture ended with Mazzotta commenting on Vico’s observance on the crisis of the Renaissance and how people go on rebuilding the world.

Mazzotta said that a combination of these ideas and people led to the Italian Renaissance.

Amy Cox, a junior geology major, attended the lecture to learn more about Italian history before taking two classes in Florence this summer.

For Cox, this lecture gave her an opportunity to experience a lecture given by Mazzotta as she will have him as a professor for an Italian Renaissance class in Florence.

“I am hoping to form a relationship with him,” Cox said.

Mackenzie Stafford, a freshman psychology major, was excited about the opportunity to hear Mazzotta speak.

“I can walk out of here and say, ‘Hey, for free, I walked in here and got all of the information from a brilliant Yale professor,” Stafford said.

Stafford was not aware of Mazzotta other than what she learned from the Office of Global Education and education abroad for the College of Arts and Sciences, but she was impressed with his knowledge and love for Italian culture.

“I think it’s very, very inspiring,” Stafford said. “I think being a freshman, it’s a lot of core classes where people are just trying to get through, and it’s refreshing to be around passionate things and passionate people.”

This summer, Mazzotta will teach a three-credit course on the Florentine Renaissance at the Kent State University Florence Institute.

Mazzotta ended his presentation informing the audience that he’s writing a book on Vico.

Devon Recktenwald is the recruiting and retention reporter. Contact her at [email protected]