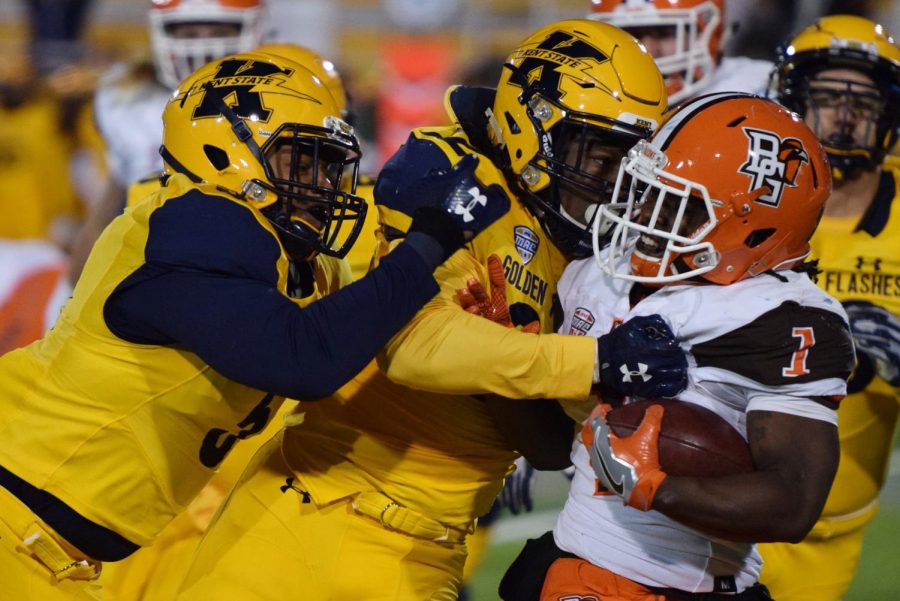 Coming off a discouraging 48-3 blowout loss to Ohio, Kent State hoped to get back on track against a one-win Bowling Green team. The Flashes’ efforts were unsuccessful though, as they lost to the Falcons, 44-16, at home Tuesday.

Quarterback George Bollas led the Kent State offense as he rushed for 84 yards and a touchdown.

“I think George did a really good job today of running the football,” coach Paul Haynes said. “We just couldn’t sustain drives enough to allow ourselves to put points on the board, but I think he played a pretty good game individually.”

Bowling Green took the lead early with a dominant 75-yard drive in under three minutes. The Flashes’ defense provided little resistance as they fell behind 7-0.

The Falcons didn’t look back. After a Bollas interception, the Falcons capitalized with a field goal to go up 10-0. Shortly after, the Falcons added a 36-yard touchdown pass from Jarrett Doege to Datrin Guyton.

Bowling Green outgained the Flashes in the first quarter 177-28.

The Flashes responded with a 75-yard drive of their own, capped off by a 22-yard touchdown run from Bollas.

Like he’s done all year, coach Haynes brought in a different quarterback in the second quarter.

Quarterback Dustin Crum came in and on his second play from scrimmage fumbled the ball.  The Falcons recovered and took advantage of the good field position with a field goal to go ahead 20-6.

“He’s going to get in at some point in time,” Haynes said of Crum’s play. “It just depends on how the game goes.  Bollas just had the long run and we felt it was a good time to rest him. It was just a young kid making a mistake, and George goes the rest of the way.”

Bollas returned to the game on the next Flashes’ possession and led Kent State to a Shane Hynes 30-yard field goal to cut the deficit to 11 going to half.

The Flashes won the second quarter 9-3, but they missed out on opportunities to cut the deficit even more.

“We couldn’t really capitalize on anything to close the gap,” Haynes said.

At halftime, the Flashes had just 60 passing yards. The lack of offense through the air has been a common theme for Kent State this season.

The Falcons opened the scoring in the second half with an 80-yard touchdown drive. It was their third drive of at least 75 yards.

“We turned the ball over way too much,” Haynes said. “They capitalized on it and that was the difference. They have a good offense, and we knew if it was a high-scoring game it would be tough for us to win.

The Falcons continued to dominate Kent State as they outscored the Flashes 24-7 in the second half.

“It was a tough loss,” Haynes said. “We knew that Bowling Green was a better football team than their record. They have tremendous talent and we saw one of the best receiving groups that we’ve seen all year.”

The Flashes (2-7, 1-4 Mid-American Conference) will be back in action Nov. 8 when they travel to Western Michigan to take on the Broncos.