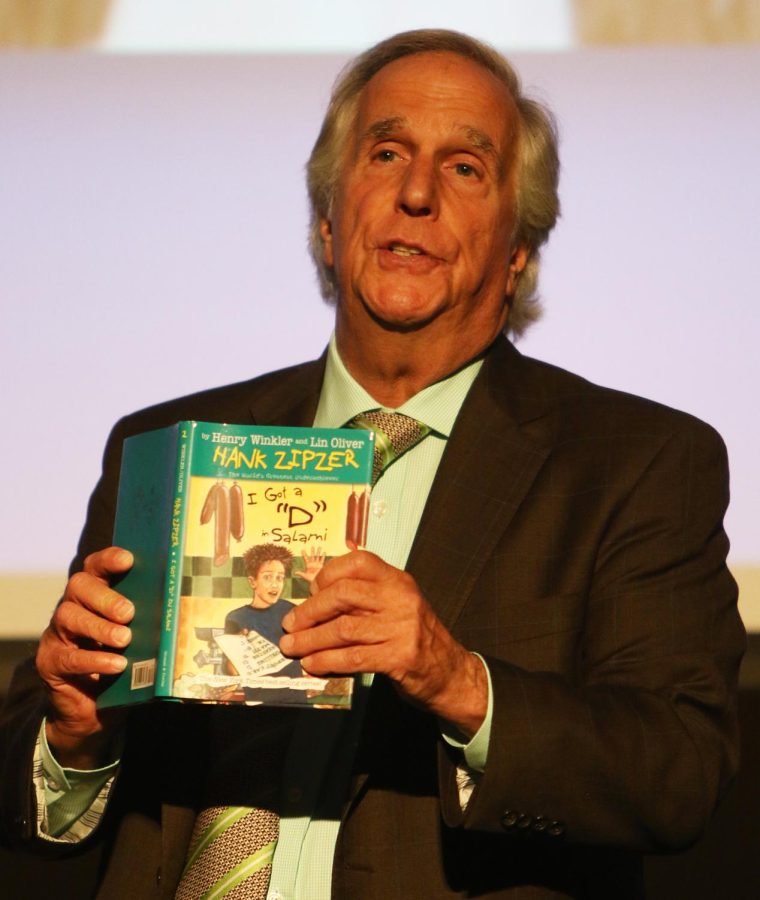 Henry Winkler, actor and writer, prepares to read a passage from “I Got “D” in Salami,” during his lecture at Kent State University Stark Campus on Tuesday, Oct. 10, 2017. The book is a part of Winkler’s “Hank Zipper” series, which follows the life of Hank Zipper, a child with Dyslexia. Winkler was diagnosed with dyslexia at 31.

Henry Winkler spent all his life determined to be an actor. There was no plan B; he wasn’t sure how it was going to happen, but he knew he needed to try.

One week after moving to California, he found himself at Paramount Studios auditioning for the part of Arthur Herbert Fonzarelli, better known as “The Fonz,” in the ABC sitcom “Happy Days” (1974-1984).

As time went on, playing the adored character “The Fonz” set the foundation for the rest of his life. He has since continued his acting career, successfully producing and directing many films and shows. He is also a best-selling children’s book author.

Years after “Happy Days”, he noticed his stepson, Jed, struggling in school in similar ways he had in his own childhood. After a disability test, Winkler discovered that Jed had dyslexia, a learning disability that affects reading and language-based processing skills.

Winkler quickly realized why school had been exceptionally hard for him as a child.

“At 31, I figured out that I had something with a name,” Winkler said. “I was dyslexic, and it was hereditary. All of that humiliation was for nothing. It’s amazing to me.”

Inspired by this, Winkler began writing the series “Hank Zipzer: The World’s Greatest Under-Achiever.” These books are inspired by his own life and difficulties with dyslexia.

“These books are my biggest accomplishment,” Winkler said to the crowd. “They are printed in nine different languages and we’ve sold over 9 million copies.”

Much of his inspiration came from the void of support he received from his parents as a child.

They were austere German immigrants and unsympathetic to his academic struggles. Winkler spent the majority of his younger years punished for his poor grades.

He explained the importance of valuing children and recognizing their accomplishments instead of their faults.

“I needed my parents to be proud when I wasn’t successful,” Winkler said.  “I needed their support when I was confused.”

Carol Cauley, a single mother of seven children, related to Winkler’s speech because of her experience with dyslexic family members.

“I always thought he was a good actor, but I had no idea about him being dyslexic,” Cauley said. “I thought his talk was very sincere and wasn’t anything that I expected. Everything he said about raising children is true.”

Winkler repeatedly told the audience that humans are all amazingly powerful, because every word they say creates an impression on a child. He stressed that children try as hard as they can and that people need to ensure that each child understands their strengths.

“He talked a lot about how he overcame obstacles to discover his talent, and it’s really inspirational,” Mayes said. “I feel like he was telling me that I have a lot of talent that I haven’t discovered yet.”

Winkler left the audience with one important piece of advice:

Natalie Meek is the south regional campuses and aerospace reporter. Contact her at [email protected]