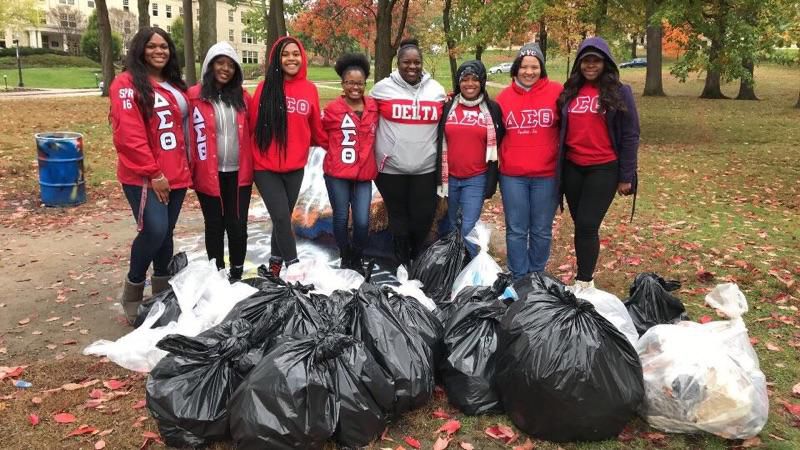 Half of a gyro, two quarters glued to the sidewalk and three broken glass bottles were the only things members of Delta Sigma Theta Sorority, Inc. didn’t pick up during their Main Street cleanup efforts Sunday morning.

Sixty volunteers gathered at the Rock at their seventh annual post-Halloween cleanup event. Volunteers were organized into groups, which converged on Main Street and surrounding areas, armed with black and white garbage bags, black for trash and white for recyclables.

The initial meeting at 9:30 a.m. kicked off with bananas, nutrition bars and Delta Sigma Theta sisters passing out latex gloves and mapping out the routes of each group, making sure problem areas, specifically University Drive and the stretch of East Main Street between North Willow Street and North Depeyster Street, got covered.

The event began in 2010 in response to the city of Kent not cleaning up on Sundays, and has continued in the spirit of maintaining the area as a clean place to live for students and Kent residents.

“Our organization is real big on community service,” said Keshuana Jones, the president of Delta Sigma Theta and senior fashion merchandising major. “So to make sure we all live in a good community, we wanted to pick a time where we can actually be effective in the community.”

Veterans of the event voiced their surprise at the meager amount of trash in the area compared to years prior, attributing the decrease in litter to celebrations ending earlier than usual Saturday evening and low temperatures driving people to stay in one place rather than trekking from house to house.

The last small team rejoined the group of volunteers around 10:30 a.m. where, after collecting all the bags, volunteers bunched together to take pictures. The crowd then went to find their way to Studio A in Twin Towers for post-clean up refreshments.

In years past, volunteers have found bits of homemade costumes stuck in bushes and abandoned on sidewalks. Avery McCoy, a Delta Sigma Theta sister and junior communication studies major, chalked the event up as a successful endeavor.

“I feel like we had a really successful event,” McCoy said. “We had a lot of participants. We had a very good turn out. We collected a lot of trash and a lot of recyclables. Community service is one of our founding principles and it means a lot to our sorority. This was really meaningful to us just to see our environment look better, feel better and also clean up our university.”

Miranda Marinello is the Greek life reporter. Contact her at [email protected]