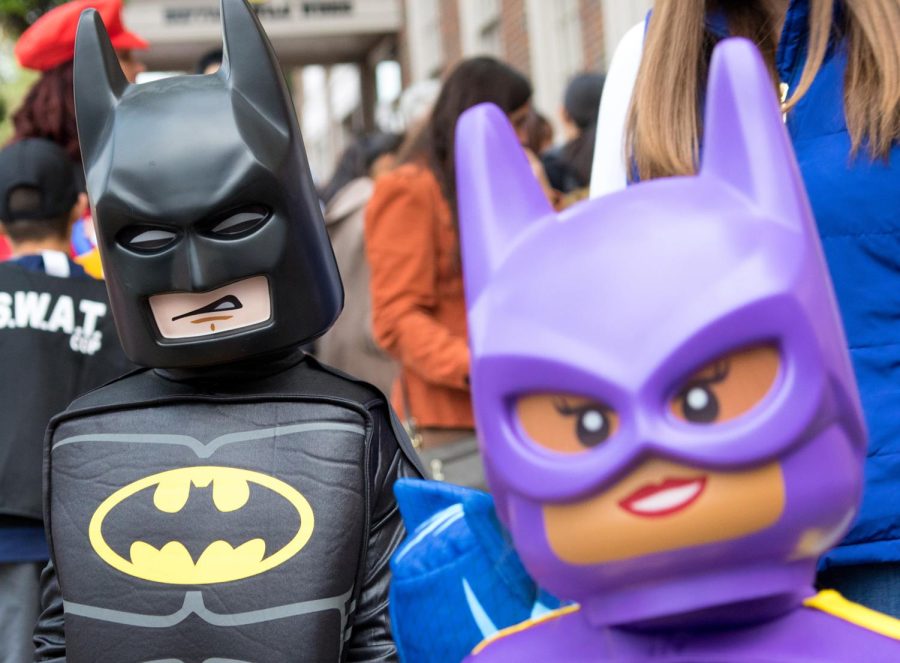 The elderly man shouted and recoiled. Standing before him was Death himself, draped in black robes, scythe in hand.

But the man’s shout of terror quickly turned to laughter as he looked longer at the young boy in a Grim Reaper costume. The boy broke character and started giggling too, and the elderly man waved to his father as the group separated.

The rain held off during the event, but some ominous clouds added to the spirit of the holiday.

“As long as we have good weather, the people come out,” said Heather Malarcik, the executive director of Main Street Kent, who organized the event. “Actually, they come out when it rains too. People really look forward to it.”

More than 45 downtown businesses participated, handing out candy and other goodies from their storefronts. Some were stores one would expect to pass out food, such as Sugar Rush and Popped!. Others were more unexpected, but still enthusiastic to become candy distributors this night, such as Defiance Tattoos and One Love Yoga.

“Oh man, (we’ve had) like a thousand kids, easy, just non-stop” Vander Horst said. “It’s nice to do this, be part of the community and do the safe Halloween, trick-or-treating thing.”

In the Marvin Kent train car on Franklin Avenue, the Kent Jaycees hosted a “haunted dance party.” One boy ran from the train car to explain the experience to his mother.

It wasn’t just children in the Halloween spirit. Many parents wore costumes equally elaborate as those of their kids. One father was in a Pillsbury Doughboy onesie and another carried a shopping basket with a fake wolf inside.

After the businesses were done passing out candy at 7 p.m., a large crowd of families gathered in Hometown Bank Plaza for the prize presentation and costume contest. An inflatable T-Rex costume towered over the onlookers. Members of the Kent State women’s basketball team were present to judge costumes.

While the judges chose winners, little dragons played tag with stormtroopers on the pavilion lawn while their parents tried to corral them.

A “Beauty and the Beast” costume took the Best Overall award and a family dressed as “Alice in Wonderland” characters won Best Group Costume. The Best Duo award went to a woman dressed as Mario, who carried a baby in a box decorated like a Mario item block.

After the costume contest, the crowd dispersed and downtown Kent was left to prepare for the slightly wilder Halloween celebration Saturday.

“All these people are here tonight with their kids,” Malarcik said. “And then they’ll come back tomorrow night without their kids.”

Dylan Reynolds is the business and neighborhood reporter. Contact him at [email protected]