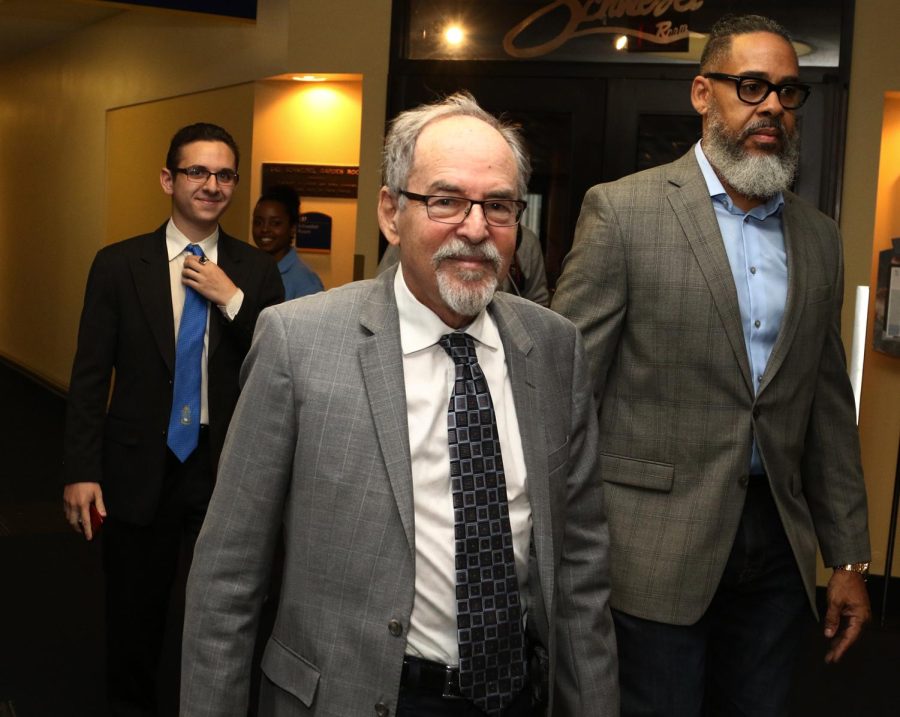 David Horowitz walks toward the room on the third floor of the Student Center where he will deliver a speech.

Students Supporting Israel at Kent State, an organization on campus, invited the pro-Israel writer to speak. Horowitz has spoken out against Palestine and calls the Palestinian people “Muslim Arab aggressors.”

There were concerns the potentially contentious event could cause protests and inflammatory reactions from students.

Ezra Katz, the president of Kent State’s SSI, told the Record-Courier they would not support any posters singling out professors or students as terrorist supporters.

There was heavy security both inside and outside the Student Center, where the event was held. Katz said the event was educational and thought-provoking.

“He said some things that were controversial to some,” Katz said. “But again, the point of him being here was to challenge people’s perception and broaden their perspectives.”

Lillian Romond, a sophomore communications studies major and secretary of Kent State’s SSI, said Horowitz is a Zionist and a good educational source to learn from.

Horowitz defended Jews and said Palestinians supported eliminating them and strove to drive them out of Israel.

“Jews are indigenous people, to use a term favored by the left,” Horowitz said.

He described Islam as an imperialist religion spread by the sword. Horowitz denied the Palestinian state, stating there are no Palestinian people, but instead they are a region.

“The goal of the Palestinian movement is to destroy the Jews,” Horowitz said. “They’re racist, used in the broadest term.”

Horowitz said the Muslim Brotherhood was pro-Hitler and compared Students for Justice in Palestine to the Ku Klux Klan.

“The Palestinian movement is a Nazi movement in the purest sense of that term,” he said.

He accused Kent State’s chapter of Students for Justice in Palestine of spreading propaganda on campus and said the KKK would never receive funding on campus, calling SJP its equivalent.

Horowitz blamed the Hamas Covenant, which is known as the Covenant of the Islamic Resistance Movement, for being behind the drug trade and alcoholism.

“This is worse than ‘Mein Kampf,’ Horowitz said. “This is lunacy.”

No protesters attended the event, but SJP held a counter event Tuesday night called Unity for Diversity. Amanda Michalak, a member of SJP, said the event was meant to bring students together.

“Instead of engaging in divisive politics, we want to break apart lines of issues and talk about the things that are important to all of us in one space,” Michalak said. “The point of today is to unify in the things that make us different.”

Padraigin O’Flynn, an SJP member, said they really wanted to foster diversity in the midst of division.

“I think it’s really important because we’re seeing a lot of political division on campus,” O’Flynn said. “And we just kind of wanted to come together and see that there are students who have similar viewpoints. There are students who are willing to stand in solidarity.”

Horowitz is a founder and the current president of the think tank called the David Horowitz Freedom Center. His ideologies are described as anti-Muslim, anti-immigrant and anti-black on the Southern Poverty Law Center’s website.

The event was listed as nonpartisan; however, Horowitz criticized liberals and left-wing political views multiple times in his speech.

Laina Yost is an enterprise reporter. Contact her at [email protected]