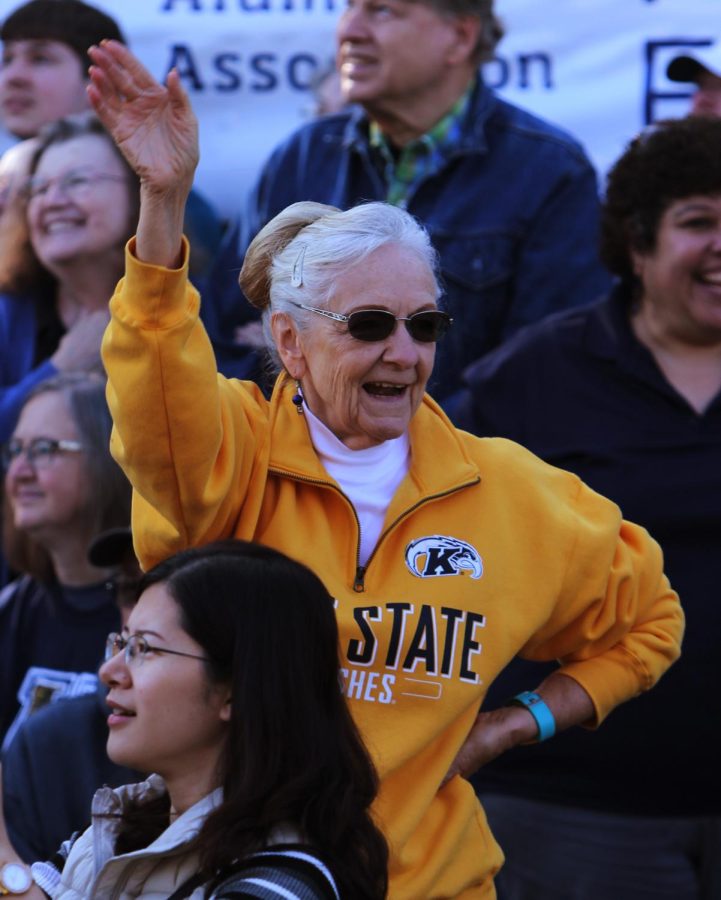 Alumni and their families gathered for the 99th annual Homecoming Parade at the Alumni Hospitality Tent on the front of campus. The event kicked off Saturday at 9 a.m. and served breakfast before the parade.

There was not a single rain jacket in sight during the parade. The event, which has been plagued with inclement weather in recent years, treated viewers to blue skies.

“It’s beautiful weather, isn’t it?” asked Brandon Tidd, the emcee for the parade. “It’s worth calling out since it’s usually 40 degrees and raining. The fact that we have this nice of a day is something worth celebrating.”

Tidd graduated in 2005 with an undergraduate degree in digital media production. He has been a member of the Kent State Alumni Association “from the day he walked across the stage.”

“It’s always great to be back on campus,” Tidd said. “So much has changed and improved, but there is still that nostalgia of being back.”

Tidd said being a member of the association has allowed him to stay in touch with what’s happening on campus.

“We put on some really great events during the year and it’s the primary way I stay up to date with what’s going on,” Tidd said.

Albert Schmidt also attended the parade viewing. Schmidt graduated in 1975 with an undergraduate degree in aerospace technology. Since then, he has gone on to work in telecommunications as an engineer. Now retired, he comes back to the parade almost every year with his wife.

“When my kids were old enough to go to college, I got re-interested in coming back to Kent State,” Schmidt said.

He still has fond memories of his time living on campus.

“For entertainment, there might be a food fight where people would start grabbing rolls and throwing them at each other. Innocent fun,” Schmidt said.

They used to have water balloons fights in the spring, where they would launch balloons out of their dorm windows.

After the parade viewing, alumni were invited back to the Center for Philanthropy and Alumni Engagement for a welcome home party. The event showcased all three floors of the building with activities and entertainment such as corn hole and caricatures.

Linda Schuck, the administrative secretary of Alumni Relations, said everyone in the building played a part getting ready for the event.

“It’s the alums’ Homecoming, so we want them to feel like they’re home when they come to the center,” Schuck said. “They need to know where to find us. They’re not going to be comfortable if they don’t see it.”

Since it is such an undertaking, planning for the following year starts almost immediately after this year’s festivities. The alumni center will start to plan the 2018 Alumni Homecoming festivities next week.

Logan Lutton is the science and alumni reporter. Contact her at [email protected]