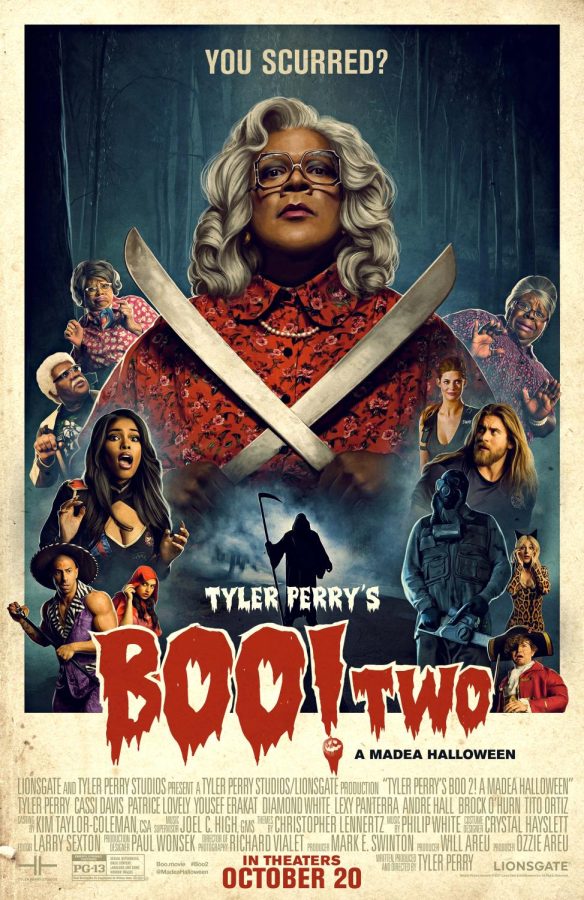 Will someone please stop Tyler Perry?

With 45 films and television series listed under his directing credits, there’s only a handful I can safely call “good.” Completely exiling the movie mogul from the big screen is drastic, I’ll concede, but at the very least, someone should sit him down to explain how to make a film worth everyone’s time.

A good lecture in filmmaking could only help his future projects — and save moviegoers from wasting more money on movies like “Boo 2! A Madea Halloween.”

It’s important to note this horror comedy sequel was made in just under one year. After the surprise box office success of its predecessor, Lionsgate greenlit “Boo 2,” ordering Perry to don his iconic Madea getup to cash in on a hopeful repeat hit.

The rushed turnaround shows in each frame, with lazy one-liners, poor acting and unflattering editing abound. Too many scenes overstay their welcome, dragging on back-and-forth dialogue to fill time in a barely written script.

“Boo 2” has one of the most uninspired plots of any “Madea” flick. Minimal exposition is given to fully realize the supernatural forces that haunt a frat party in the middle of a forest.

Instead, Perry presents a half-baked mashup of horror film cliches — an undead chainsaw-wielding menace, creepy ghost girls with dark hair hiding their faces, Death himself with sickle in-hand — that amount to one noisy, boring time at the movies.

Any laughs given by viewers can only be directed at it, not with it. And horror elements peppered throughout aren’t enough to consider this a worthy Halloween popcorn movie; scenes intended to be mildly frightening have all the production value of an amateur cutscene from a YouTube scare prank video.

Other minor imperfections add up, including sloppily dubbed profanity censorships, unconvincing makeup and countless plot holes; the twist is detectable a mile away and in no way makes sense.

Some of the flaws “Boo 2” just can’t seem to shake must be blamed on Perry — who writes, directs, produces and stars here, much like most of his projects. There’s no oversight, no one to step in and rein him in when he goes astray.

What’s most offensive about “Boo 2” is that Perry doesn’t think his fans will care that he slapped together this mess of a movie for a mindless cash grab. It’s clear he underestimates his audience.

He has a great character on his hands with Madea, but one best utilized in a supporting role within a story grounded in reality and tackles real issues with actual character development (see: “Madea’s Big Happy Family,” “I Can Do Bad All by Myself”).

With a little more effort and understanding for what his fans flock to his brand for, Perry is capable of creating a worthwhile movie.

But, he’s more commonly culpable of pandering his way to one afterthought dump after the other.