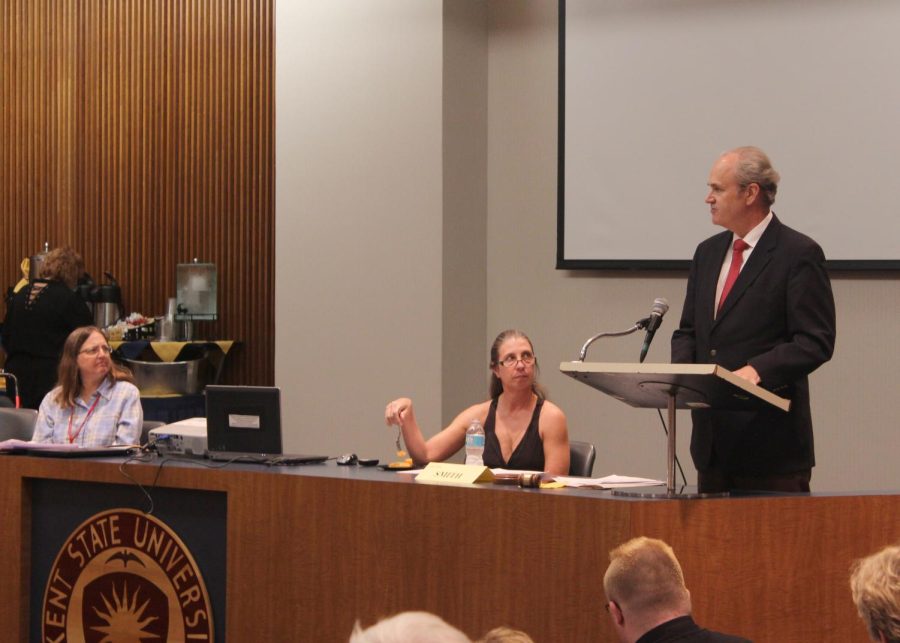 Kent State will soon find out how many senior faculty will be retiring through a buyout offer, set to expire Nov. 6.

Full-time faculty members who have either accrued at least 15 years of credited time at the university or qualify for pension benefits have been offered the buyout from the university.

The offer, officially named the University Early Separation Plan, will give those eligible the option to exit their contracts with the university on May 31, 2018, in exchange for a five-year severance package.

Qualifying tenured/tenure-track, College of Podiatric Medicine and non-tenure track faculty can accept the plan. Anyone offered the buyout must notify the university of their decision by the Nov. 6 deadline.

The plan will offer, to those who accept, one year’s salary, paid out over the next five years. For tenured/tenure-track and College of Podiatric Medicine faculty, payment caps off at $85,000, while non-tenure track faculty have a payment cap of $45,000. In addition, those who accept the offer will receive either 25 percent or 30 days, whichever totals less, worth of pay to compensate unused sick leave.

“The primary goal is to recruit and hire more tenure-stream faculty at Kent State University,” Diacon said. “To be eligible for this plan, you have probably been here for many years and have a salary that reflects that experience. We can hire three faculty members for every two that take the plan.”

Deborah Smith, the Faculty Senate chair and associate professor of philosophy, said she sees the need for the plan on the university side.

“Faculty have a real attachment to their profession,” Smith said. “To them, it’s almost like a calling. … They often stay on 10, 15, 20 years past the time they can actually retire. And on the one hand, that’s good for those faculty members. It’s nice to have people with long, institutional memory, et cetera. But it prevents the university from getting, sort of, new blood.”

Kathryn Kerns, the Faculty Senate secretary and professor of psychology, said the plan aides in fixing what she sees as a university-wide issue.

“Their hope is that, with people taking the buyout, it will bring in enough of a savings that they can hire more tenure-track faculty because new people are cheaper than those of us who have been around for a while,” Kerns said. “I just hope that that goal works out because I think the erosion of tenure-track faculty is a problem. It’s a problem in higher-ed, but it’s also a problem here at the university.”

Kerns accepted the offer after 29 years at Kent State because she was looking for a way to begin slowing down her career, and the buyout offered enough incentive to tip the scale in retirement’s favor.

“We don’t have an option for step-down retirement at Kent State; it’s kind of like, you’re either retired or not,” she said. “Some universities have a step-down where you can have a phased out retirement period where you slowly work less.”

Kerns will still be an active researcher at the university, but will not be paid for that work.

“It won’t (delay payment) because the delay of the payment of the plan is if Kent State is paying you money,” Kerns said. “They aren’t going to pay me anything for this research. It’s free to them. I can do it because I have a pension coming to me. So, while I’m being paid on my pension, I can still work with students here.”

Deferment of buyout acceptance can last for up to one academic year, and the university decides either based on departmental need or via request by the faculty member.

Kerns expressed concerns with the ambiguity of the plan, not only the expected results, but how the university may handle the aftermath.

“The only thing that was a pause about the contract terms is that, it says in there that the university can decide not to let you retire,” Kerns said of the deferment option. “They indicated that that would be rare, but that was just sort of an ambiguity in there that they said it was our decision, but it turns out it’s not entirely the faculty member’s decision. The university can decide: ‘No, we don’t want to let this person retire because we have certain teaching needs,’ for example.”

During the Faculty Senate meeting Oct. 9, Diacon explained, despite the university’s ability to differ buyouts, they want to avoid doing so.

“I’m not so concerned about not approving every (deferment) request,” Diacon said. “It’s just that with every request we approve, it just delays the total amount available to make these replacement hires.”

He did, however, cite “programmatic need” as a potential reason the university would utilize a deferment.

“Maybe it’s in a field where it’s difficult to make a replacement hire,” Diacon said. “I could see that as a reason. Maybe a particular program is undergoing its national accreditation review that year and it would just be too much of a hole.”

Faculty members have expressed other concerns with the offer, as well.

Smith wondered whether the benefits offered through the plan would be enough to encourage those who are targeted by the plan to take it.

“I’m not sure that the package was, in some ways, rich enough to encourage faculty to leave early,” Smith said. “Even if you’re eligible to retire, if you’re not at least 65, you’re not going to be eligible for Medicare and so you’re going to have to figure out, ‘How am I going to do health care in the meantime?’ And even $85K may not cover the health care cost for that period of time.”

Smith also expressed concern with the perception of the difference in pay caps the plan offers to tenured/tenure-track in comparison to non-tenure track faculty members.

“I think it was highly mistaken to treat the full-time, non-tenure eligible faculty in a way different from the tenure-track faculty,” Smith said. “I know that many of the non-tenure track faculty feel disrespected by that.”

Tracy Laux, a Faculty Senate member and senior lecturer of mathematical sciences, said he and other non-tenure track faculty felt disrespected by the pay cap structure of the plan.

“Although we are certainly happy to be included as full-time faculty in the separation plan, we were a little disgusted with the disparity in the salary caps paid into the annuity between tenure-track faculty and full-time, non-tenure track faculty,” Laux said. “I’m satisfied in what they are saying in regard to how the numbers were created is true. … I am not satisfied with the attitude that (the explanation) justifies the disparity in the offer.”

“This disparity in the cap on the separation plan also illustrates the disparity in salaries between tenure-track and full-time, non-tenure track,” Laux said. “That certainly, those eligible in each group do have those average salaries, but that begs the question as to: Why are (non-tenure track) salaries close to 50 percent less than our tenure-track colleagues at a university that claims in their strategic mission that they’re fully committed to undergraduate education?”

Jack Kopanski contributed to the reporting of this story. Contact him at [email protected]